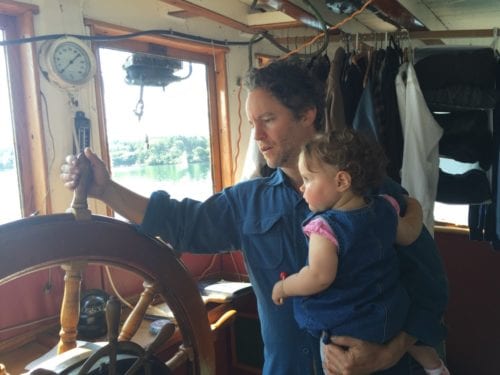 Brendan Jones, pictured with his daughter Haley, has won the Alaskana Award for his debut novel, “The Alaskan Laundry.” The book’s protagonist, like Jones, refurbishes a tugboat. (Emily Kwong/KCAW photo)

Sitka author Brendan Jones has won a statewide award for his book “The Alaskan Laundry.”

Created in 1994, the Alaskana Award recognizes one work of fiction or nonfiction that gives “significant contributions to the understanding of Alaska, exhibiting originality and depth of research and knowledge.” But the best part for Brendan Jones, the winner this year, is that the Award is decided by librarians around the state.

“You are not going to get a better reader than Greg Mandel down at Sitka Public Library or Patricia Brown over at Haines Borough Public Library or other librarians across the state. So that they were the ones that nominated and recognized this book just warms my heart. I think it’s just so awesome,” Jones said.

While “The Alaskan Laundry” is fictional, there are strands of memoir. The protagonist, an Italian-American woman named Tara Marconi, was raised in Philadelphia. Jones was too. She lands a job at a salmon hatchery in Port Anna, a community much like Sitka, and settles into a life much like Jones’ – commercial fishing and refurbishing a WWII-era tugboat.

Since its publication last year, the 380-page paperback was a “Pick of the Month” for Oprah’s Book Club and longlisted for the Center for Fiction First Novel Prize. But for Jones, the national awards pale in comparison to a statewide nod.

“I think Alaska has some of the best readers I would argue in the country and probably the world, as the result of our winters in small communities. Even the fishing community. Some of the best readers are trollers. If the story doesn’t catch their attention, they’re going to put it down. They’re very discriminating in a way that the literati in New York or San Francisco is not. To ring a bell with those folks is just the best and definitely what I was hoping to do,” Jones said.

Last year, at the Association of Writers and Writing Programs in Seattle, attendees asked writing from the 49th state is in the midst of an Alaskan Literary Renaissance. Jones thinks so, for the same reason there’s been a boom in reality television. “It could be truckers on the ice road or gold panning or fishing in Alaska. On the flipside you have a lot of writers interested in writing speculatively and on the level of image, about the state. It’s just kind of poetic. They just tell a good yarn.”

Jones adds that Alaska Natives have been telling stories of the place for tens of thousands of years. Previous recipients of the Alaskana Award include Heather Lende in 2006 for “If You Lived Here, I’d Know Your Name,” as well as Nora Marks Dauenhauer, Richard Dauenhauer, and Lydia T. Black in 2009 for “Anooshi Lingit Aani Ka: Russians in Tlingit America: The Battles of Sitka, 1802 and 1804.”

Jones, who started “The Alaskan Laundry” 11 years ago, takes inspiration from authors like Raymond Carver, Tobias Wolff, and Richard Ford. He describes his writing mode as “dirt-and-grit realism,” “writing short declarative sentences that shows things or describes things as they are.” Jones added, “It’s kind of the antithesis to magical realism or science fiction or fantasy fiction. Maybe it’s my own pet theory, but I just think there’s so many magical things that happen in the state that you don’t need to rely on a heavy dose of fantasy in order to tell a fantastic story.”

Jones will receive is award at the Alaska Library Association’s Annual Conference on February 25th in Ketchikan.