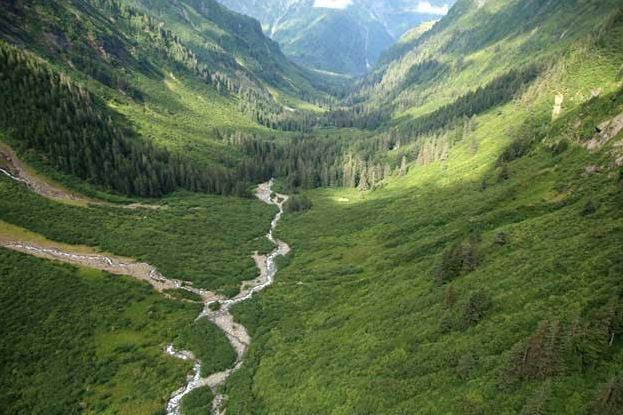 The Sitka Ranger District has $650,000 to spend on habitat improvements and recreation locally, but lacks the authority to allocate a single penny.

That’s because the funding comes from a source that gives ordinary members of the public the power to decide how it is spent.

The Sitka Resource Advisory Committee is seeking proposals for projects that benefit resources, infrastructure, and/or ecosystems within the Sitka Ranger District of the Tongass National Forest. Projects often focus on restoration, recreation, or stewardship. Proposals are due April 3. If you are interested in submitting a proposal, please contact Lisa Hirsch-Vilandre, RAC Coordinator, at (907)747-4214.

The law is the Secure Rural Schools and Community Self-Determination Act of 2000. Now you’re wondering: Isn’t Secure Rural Schools the program that provides a few hundred thousand dollars to Sitka schools every year? It is, but this money comes from a separate title of the act, and has a totally different purpose.

That’s Perry Edwards, the Sitka District Ranger, and the federal officer who oversees all funding proposals under this uniquely public program called the RAC — or Resource Advisory Committee.

The Sitka District has pulled in between $150- and $200,000 a year in RAC funding since the Act came into law. Edwards says past RACs have had a broad focus.

“Working on existing infrastructure with trails, and doing restoration work are the two big ones we see. We’ve done a lot of work with invasive plant removal. Redoubt Lake, we funded part of the fertilizer program for a number of years that helps with the sockeye production. We’ve done a number of wildlife habitat improvement projects at Starrigavan and out on Kruzof Island where we did pre-commercial thinning, which is basically taking out the smaller understory trees in an area that’s been harvested — it grows back like weeds, dandelions — where you can’t see any understory. Which is the grocery store for deer in winter. It’s critical for that and it’s shaded out. So we use those funds — the RAC chose to use those funds — to do those improvement projects.”

“Sawmill Creek Campground. It’s been closed since the Blue Lake project. We actually have some money from the city tied to their FERC — Federal Energy Regulatory Commission — the original dam licensing to put forth some renovations on it. Because right now it’s just a mess.”

The Resource Advisory Committee is comprised of up to fifteen members — five members each from 3 general categories: The commercial timber, forest products, or outdoor recreation industries; nationally recognized environmental, historical, or hunting organizations; and teachers, elected officials, or the public at large.

In the event someone representing these interests gets a seat on the RAC and wants to push a special agenda or project, RAC coordinator Lisa Hirsch-Vilandre is there to prevent a conflict of interest.

“They have to bring in a representative of their organization or group to talk about it to the RAC, if the RAC so chooses to want to talk to them and ask questions. But that RAC member cannot be that person.”

In the last two years, the Sitka Resource Advisory Committee has been unable to muster a quorum, and so the Secure Rural Schools money has piled up. Edwards estimates that there is roughly $650,000 to spend. There are challenges to either getting a seat on the RAC, or submitting a proposal. Edwards says that’s where he comes in.

“People don’t realize the details that the federal government has. What I hope our role is, is not to be a stumbling block, but rather to help them be successful in at least putting that forth in a format that it can be looked at by the RAC.”

The terms of two members of the Sitka RAC are due to expire this year. Terms on the RAC are 4 years. RAC proposals are due April 3.

Note: Perry Edwards currently holds a seat on the board of the Raven Radio Foundation.