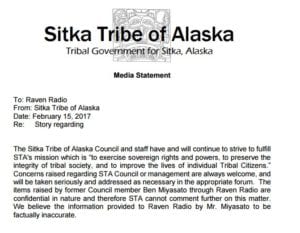 In a recent story about the abrupt resignation of Sitka Tribal Council member Ben Miyasato which was broadcast and published by KCAW News:

We reported that council members Wilbur Brown and Woody Widmark declined to comment on allegations made by Miyasato that the pair overstepped their authority as members of an informal subcommittee looking into the firing of the Tribe’s director of social services.

It would be more accurate to say that Brown and Widmark were prohibited from commenting by the Tribe’s Code of Conduct, without the permission of the Tribal chair.

Tribal Chair KathyHope Erickson responded to our requests for an interview, and her comments are included in the original story, as are those of former chair Mike Baines. Although general manager Lisa Gassman also was invited to comment, she declined. After the story’s publication she sent a formal statement which reads in part, “The items raised by former Council member Ben Miyasato are confidential in nature, and therefore STA cannot comment further on this matter.”

From the STA Code of Conduct: