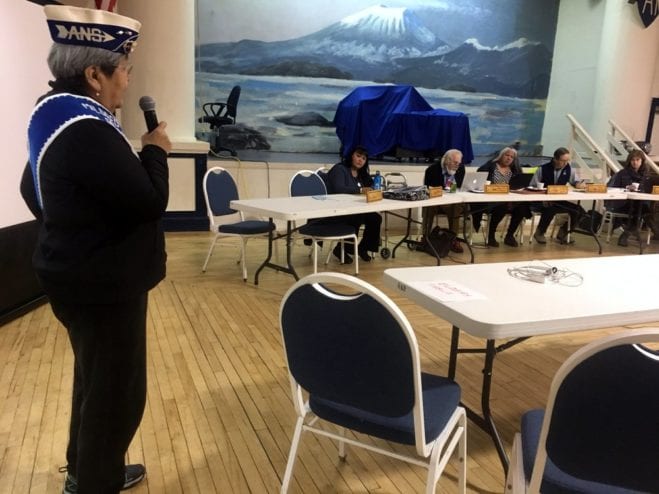 Alaska Native Sisterhood member Pat Alexander was one of several speakers to urge the board to retain language and cultural programs in the district, even though there is “some rough sledding ahead” with the school budget. (KCAW photo/Robert Woolsey)

Members of the Alaska Native Brotherhood and Sisterhood urged the Sitka School Board to continue the district’s exceptional cultural programs, despite budget uncertainty next year.

The board held its regular March meeting — as it usually does — Monday evening (3-6-17) in the ANB Founders Hall.

ANS member Pat Alexander was aware that the Sitka School Board was looking at a deepening deficit next year. She admitted that there was “some rough sledding ahead.”

But she reminded the board of the importance of cultural education.

This was theme of the evening’s public testimony: cultural identity. Marsha Strand is the widow of Martin Strand, and an adopted member of the Kiks.adi Tlingit.

“We want to advocate for the Tlingit language. That’s the number one thing that needs to be at the top of your list. As educators you will probably assert that we also have learned. Language tells about a culture, it teaches about being a human. And all of us is goal-seeking should have that as a very, very important item.”

ANB member Spike Arnold took a different tack. He urged the board to align the district’s spring break with the Gold Medal Basketball Tournament in Juneau. The event brings together teams from communities around Southeast Alaska — many of whom have been playing for generations.

Spring break doesn’t always fall at the same time as the tournament. Arnold thought it should be a priority.

“You have a number of students who miss a week of school because basketball is very important to this community, and they’re going to go to Gold Medal in Juneau. It’s not just the games, it’s a cultural event. Going to Juneau is a tradition.”

ANS secretary Harriet Beleal had prepared extensive remarks for the board, expressing support for the district’s efforts to create a cultural coordinator position, currently held by Nancy Douglas, and the partnerships and grants that made the cultural program possible.

But when she went off script, the 83-year old touched on the core idea of cultural education.

Beleal reminded the board that the ANB Founders Hall was more than just a building, it was home. Her message about the significance of home resonated beyond the walls of the historic structure.

“This is where our identity comes in. So we need to respect our identities as people. Because the fight goes on. The fight all over — in South Dakota, everywhere. Stand up and let your voice be heard. That’s why you got a voice, you know.”

Beleal expressed her pride in Dionne Brady, a lifelong Sitkan, teacher at Mt. Edgecumbe High School, and now a member of the Sitka School Board. Brady’s grandmother, Isabella, helped found the Sitka Native Education Program; her granddaughter wondered about its future.

“I look at my generation and I know who was active when we were young in SNEP, and then how few of us are active today. And I wonder what’s going to be left of our culture 40 years from now, 60 years from now. My big concern is that all we’re going to have are shares in a corporation and CDIB cards.”

CDIB stands for Certificate of Degree of Indian Blood.

The Sitka School District has a long-standing partnership with ANB/ANS to offer cultural enrichment to students through grade 5. The district partners with the Tlingit & Haida Headstart program and the Sitka Tribe of Alaska to run the relatively new Wooch.ein Yei Preschool for 3-5 year-olds. There’s a Tlingit immersion class at Blatchley Middle School, and a Tlingit class at the high school — both taught by Roby Littlefield.

None of the programs have been targeted for cuts in the coming year, although the district is waiting on the outcome of several bills in the legislature which could significantly affect education spending.