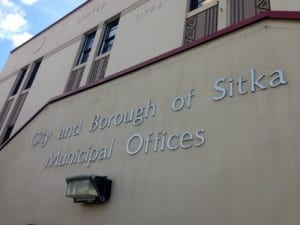 The search for Sitka’s next city administrator has been narrowed to five candidates.

The Sitka Assembly met in special session Tuesday night (3-7-17) to review their top eight choices from the 49 people who had applied.

The eight had been asked to submit written answers to a couple of questions about Sitka and how their management style might fit the community.

Mayor Matt Hunter said he appreciated the candidates who took the time to tailor their answers to Sitka — especially the two local candidates Bryan Bertacchi and Dave Miller. Nevertheless, he wouldn’t rule out candidates who supplied more boilerplate responses.

Member Bob Potrzuski, however, expressed concerns over one candidate in particular.

“In talking to some people who have worked at the municipal level in Juneau, I would be uncomfortable in moving forward interviewing Mr. Michael Scott.”

Michael Scott is the former assistant commissioner of the Department of Transportation, former city manager of Anchorage, and the former borough manager of Mat-Su.

Potrzuski said he would only share his reasons in executive session.

The rest of the assembly agreed to eliminate Scott from the interview pool, although the mayor reminded members that they could recall any of the original applicants, or take new ones.

City human resources director Mark Danielson cautioned the assembly about one of their other top picks, Harry Staven.

“In my research I found that several of his tenures were very — extrordinarily short. In 17 years he’s had 17 positions. So I would think that would be something that at the very least would be a question you would want to ask Mr. Staven.”

Mayor Hunter thought that this was a red flag. With five candidates still in the pool, the assembly decided to remove Staven from the list.

That left one matter to settle: candidate Bryan Bertacchi had applied to jointly serve as municipal administrator, along with his current position as Sitka’s utility director.

Member Tristan Guevin wondered if Bertacchi would settle for just the one job.

“I’m not sure that the proposed split position between electric director and administrator is something I would want to see. I’m almost 100-percent sure that it’s not tenable to me, and I wonder if now’s the time to see if Mr. Bertacchi would be willing to just be the city administrator, without a dual role.”
Regardless of how he responds, as a current municipal employee Bertacchi will receive an interview. So will current fire chief Dave Miller. The three out-of-town candidates to be invited to interview are former Bristol Bay Borough manager Patrick Jordan, current Homer public works director Carey Meyer, and former Naval Station Everett city manager Kevin Opple (AWE-pull).

The assembly has scheduled 45-minute interviews with the candidates beginning at 5 p.m. on Monday, March 20 and Wednesday March 22. The interviews will take place via Skype in Harrigan Centennial Hall. The sessions are open to the public.