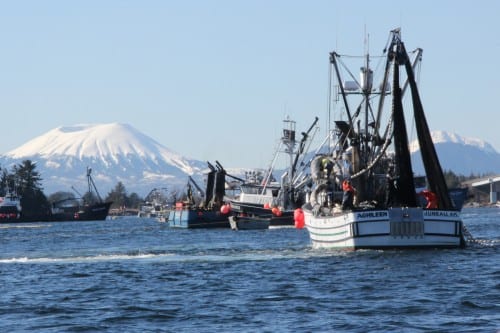 The Alaska Department of Fish & Game reports promising schools of herring have been found near Kamanoi Point on Kruzof Island. A half-ton set taken on Wednesday morning contained females with 8.9-percent mature roe. That’s not far below the minimum 10-percent mature roe the department requires to hold a fishery.

The herring are also running large — 133 grams on average. That’s well above the 110 gram minimum weight set by the department.

Not many of the 48 permit holders have arrived in Sitka, as of Wednesday’s announcement.

ADF&G biologist Eric Coonradt said boats have been trickling in. But he expects the 2-hour notice will “light a fire under some people.”

Coonradt was last able to fly over Sitka Sound on March 10. He noted numerous whales, and over 400 sea lions, in the deeper waters off of Bieli Rocks. Smaller groups of herring predators were observed from Kakul Narrows in Salisbury Sound, and as far south as Vitskari Rocks in Sitka Sound.

He said that the broad distribution of predators this time of year was normal.

Sac roe seiners landed 10,050 tons of herring in three openings last year in Sitka Sound, but fell almost 5,000 tons short of their guideline harvest level. There were early closures in 2012 and 2013 as well.

Based on permit prices, the sac roe fishery is not the gravy train it was once considered in the 1990s. Markets for sac roe — the skein of eggs stripped from females before they spawn — have been on a downward trend in Asia. A Sitka Sound herring permit is valued at around $248,000, that’s down from a recent high of $461,000 in 2014.

Permit holders will meet with ADF&G managers at 1 p.m. Thursday, March 16, in Harrigan Centennial Hall, to plan a strategy to harvest this year’s quota of 14,649 tons.