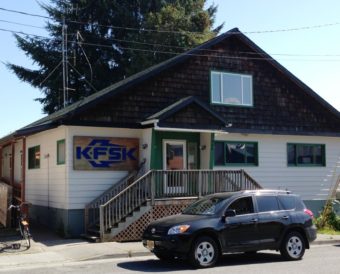 KFSK in Petersburg is among Alaska public radio stations that could be hit hard under proposed budget cuts. (Photo by Ed Schoenfeld/CoastAlaska News)

A state Senate panel wants to eliminate funding for most public broadcasting in Alaska. That puts it in conflict with the House and the governor, who want to keep the finances flat.

That amount made it through the House budget-writing process. But a Senate Finance Committee panel on Tuesday cut almost all public broadcasting money.

“The rural guys? We like it. Southeast, Kodiak, Western Alaska, pick your spot. If there’s a natural disaster, getting some of the local news is very critical. But it’s a target,” he said.

State funding is a significant part of most stations’ budgets, including this one’s. It also leverages federal funds, which most stations would lose if the cut is passed.

The defunding proposal will go before the full Senate Finance Committee before heading to the chamber’s floor.

The cut was made by that panel’s subcommittee considering the Department of Administration’s budget, which includes public broadcasting.

Juneau Democrat Dennis Egan opposed the cuts through amendments to restore the money. They were voted down.