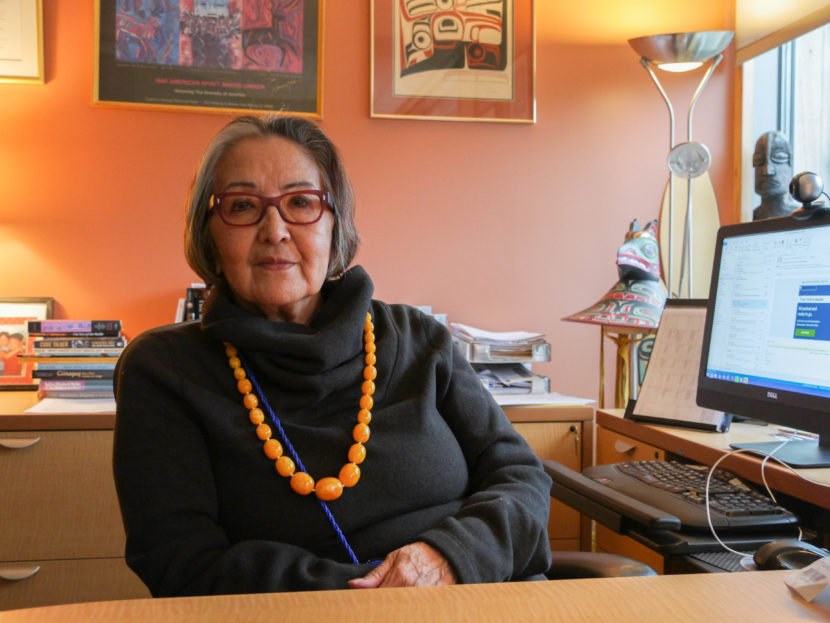 Longtime Sealaska regional Native corporation board member Rosita Worl will step down as a director in June. She will continue to head up the Sealaska Heritage Institute. (Photo by Lakeidra Chavis/KTOO)

One of the Sealaska regional Native corporation’s longest-serving leaders is stepping down.

Rosita Worl has spent 30 years on the Juneau-based corporation’s board of directors. She said she’s been thinking about leaving for a while.

“I probably would have resigned three years ago, but at that point in time, I was chair of the Lands Legislation (Committee) and I felt like I wanted to see that completed before I left the board,” she said.

After several attempts, it passed Congress in 2014.

Worl will complete her final three-year board term, which ends in June. That will leave an open seat on Sealaska’s board of directors, to be filled during spring shareholder elections.

In the past, many departing board members resigned during their terms and were replaced by an appointee, who then ran as an incumbent.

Worl will continue as president of the Sealaska Heritage Institute, the corporation’s cultural arm.

The anthropologist, who’s taught at the University of Alaska Southeast, says she’s looking forward to completing some academic projects.

“I’ve had to spend most of my energies on Sealaska and Sealaska Heritage Institute. And I’d like to finish a couple of manuscripts that I have: Tlingit property law and an ANCSA study, for example,” she said.

Worl, of Juneau, is one of the longest-served members of Sealaska’s 13-person corporate board.

Only Albert Kookesh of Angoon has served longer.

She’s been on the boards of the Alaska Federation of Natives, the Indigenous Languages Institute and the National Museum of the American Indian.

Her Tlingít names are Yeidiklats’akw and Kaa háni and she is Eagle of the Shungukeidí (Thunderbird) Clan from the Kaawdliyaayi Hit (House Lowered from the Sun) of Klukwan and a Lukaax.ádi yadi (Child of the Sockeye Clan).