Should Sitka’s two hospitals become one? 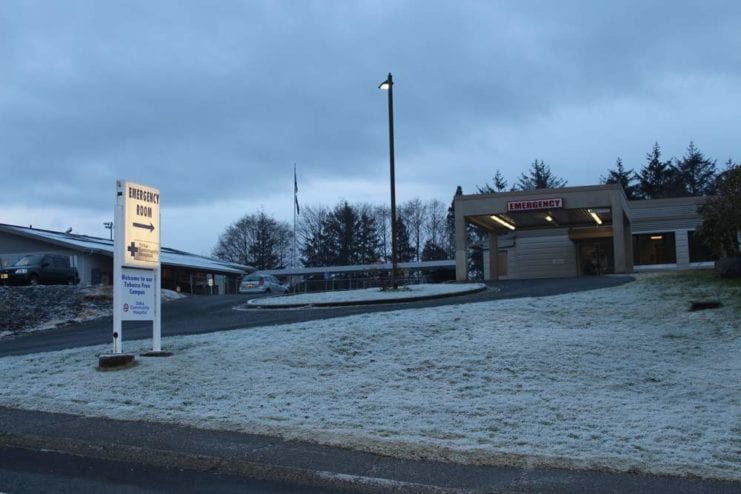 The fate of Sitka’s city-owned hospital hangs in the balance. An outside consultant says it’s time to merge with SEARHC – the Southeast Alaska Regional Health Consortium – while hospital leadership wants to remain independent.

After a presentation from ECG Management Consultants on Tuesday (3-21-17), the Sitka Assembly decided to seek formal proposals from both hospitals. But not before getting an earful from citizens opposed to the buyout.

Medicine is a life and death matter. And if Sitka Community Hospital was a patient, it would be 61 years old and recovering from a lethal case of under-billing. The good news is that this year the hospital may finally break even. But can it make a full recovery?

Consultant Kevin Kennedy says no. “The hospital has not been making money and continues to lose money. Even though its financial performance has definitely improved this year, it’s certainly not where anybody would like it to be,” he said.

After a year of talks, ECG is recommending a merger with SEARHC.

Kennedy’s report (AssemblyReport20170316_388067) detailed how SEARHC plans to offer jobs to all employees, give veto power to two Sitkans on its accreditation board, spend $100 million on a new facility and expand services. He then rattled off the nine areas that lack full-time providers in Sitka – “cardiology, dermatology, gastroenterology, oncology, neurology, psychiatry, OB/GYN, pediatrics” – and argued that a merger could change that. 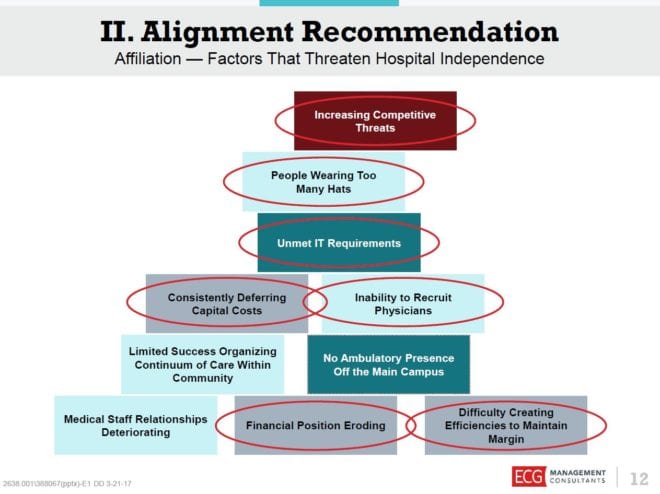 Kennedy thinks Sitka Community Hospital can only stay afloat for another two years and urged the Assembly to act sooner, rather than later.  “I don’t know if you can negotiate this deal a year from now, or two years from now, that SEARHC is putting on the table,” he said.

SEARHC hasn’t made a formal offer, but COO Dan Neumeister assured the Assembly of their interest. He asked them, “What should the future of healthcare be and how great it could be, rather than holding onto the past?”

But Sitka Community Hospital has a different prognosis for its future, one where the hospital regains financial health and survives. The plan now is to pay for capital needs with tobacco tax revenue and for a new electronic health records system – a $3 million project – out of reserves. CEO Rob Allen said his team is also looking for ways to restructure the hospital and grow the strongest programs – like the clinic, home health care, and radiology.

“I cannot say that moving forward we will be the same organization in two years, but we would still be here and still thriving,” he said.

Over a dozen Sitkans, many of them hospital employees, patients, and allies testified with the same message before a crowd of 100 people. Many questioned the fairness of ECG’s report.

Rich Phillips called it a “railroad job” that offered scant information on SEARHC’s finances. “If we’re going to get thrown under the bus, let’s see what the bus looks like!,” Phillips remarked, eliciting chuckles. “Let the Assembly see the last five years at SEARHC.”

Dr. Richard Wein, who has worked at both hospitals, agreed. “The books need to be opened from SEARHC in order to understand what’s going on here. Their own financial stability needs to be questioned.” Since SEARHC gets the majority of its funding from compact funds and grants, Wein also questioned the logic of relying on federal dollars for Sitka’s healthcare.

Harriet Miyasato Beleal, a patient at SEARHC, was outraged that Alaska Native beneficiaries were not directly consulted on that matter. “Just being able to read it in the newspapers is not enough. Our constitutional rights have been violated and no due process has happened for us. Historically it’s an old story and one that is not in our best interest,” Beleal said.

SEARHC was established by the Indian Self-Determination Act in 1975 to provide medical care for Alaska Natives. But that’s started to change. SEARHC is expanding in some places to non-Native beneficiaries. In January, they merged with a health center in Wrangell.

Should the same thing happen in Sitka, SEARHC would open its doors to all. Trish White, who operates Harry Race and White’s Pharmacies, pointed out this could close doors for some businesses in town. She’s been the contract pharmacist for Sitka Community Hospital for 37 years.

“We have two independent community pharmacies. At least one of those will go away of this happens and probably both of them would go away because there would no reason to outsource your pharmacy.

When businesses leave, people leave. Karen Lucas forecasted a doomsday scenario for Sitka, where the cost of living is already on the rise. “To close the hospital is another nail in the coffin for the demise of this town,” Lucas said.

A nail in the coffin, or is it life support – a chance to alleviate some the financial pressure on the City of Sitka? That’s the key question here.

Mayor Matthew Hunter quoted Assembly member Steven Eisenbeisz, who wasn’t present, in saying, ‘We value the hospital in our hearts, but do we also value it in our pocketbook?’ He reminded the Assembly of SCH’s major bailout in 2014.

“I’m really concerned that if we get to a point like we were a couple years ago and the hospital CEO [then Jeff Comer] says, “We’re going to shut the doors in 30 days if you don’t give us $1 million,” the city is not going to be able to answer that one of these days. That would bankrupt us. Because every liability that the hospital has is a city liability. We don’t have enough money in our permanent fund to cover what could happen if suddenly we had to close the doors. So I’m not in favor of rapid change. I’m not in favor of jumping in and saying, ‘Okay, let’s change this.’ I want to make sure what we do is the most responsible way forward.

Finding themselves at this crossroads, the Assembly decided to pause and solicit more information. Through unanimous motion, they invited both hospitals to draw up proposals – SEARHC for the merger and Sitka Community Hospital for financial sustainability. Taking a cue from the crowd, Assembly member Aaron Swanson requested the group hold a town hall meeting to gather citizen input that will likely take place in a month.