Alder takes a (beautiful) seat at the small-scale logging table 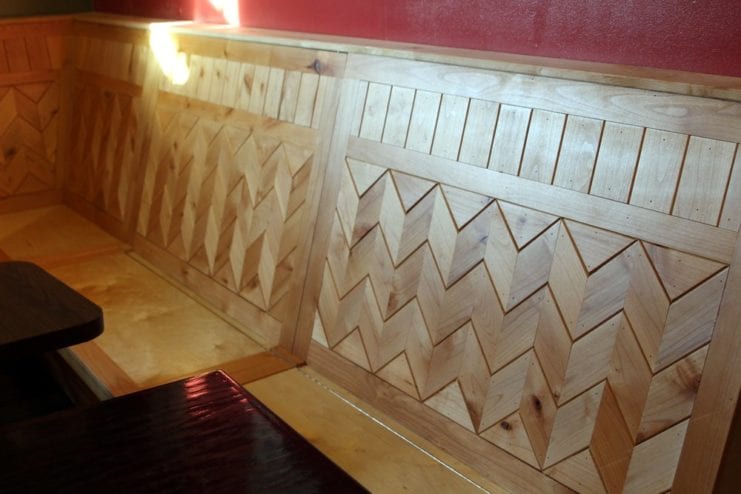 Back Door Cafe owner Alana Peterson says these custom-built benches of alder were an affordable alternative to reupholstering old church pews. “Why pay so much for something I didn’t love?” she asks. (KCAW photo/Robert Woolsey)

Alder is undergoing a mini-revival in Sitka. The fast-growing hardwood was once maligned by loggers in Southeast as a trash tree. But as the industry shifts toward smaller-diameter, second-growth logs among the timber royalty of spruce, hemlock, and cedar, alder is showing economic potential.

In Part 1 of a 2-part series on alder, KCAW’s Robert Woolsey looks at how alder made its way into furniture in Sitka.

Sitting in the Back Door Cafe these days is a little like taking your coffee in a wood sculpture. The backrests of the benches are covered with a beautiful geometric inlay — all made from alder.

It all started in this garage on Davidoff Street, cutting 3,200 pieces of alder.

Carpenter Chris Jacoby cutting alder lumber: “When you do things like this you just have to be a little bit wise, and you plan ahead. 22-and-a-half, 45s, and 90s. I could have done a different pattern but that actually goes back to ancient times.” 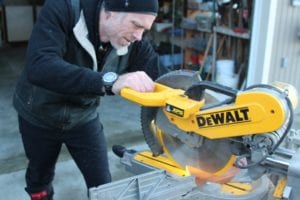 Contractor Chris Jacoby had not worked with alder before, but now he’s a fan. “It cuts like butter,” he says. “And it’s ridiculously strong.” (KCAW photo/Robert Woolsey)

“Christopher Jacoby. Actually from Texas, but I moved up here to live in Tenakee Springs. And I lived there for a year-and-a-half rebuilding the Snyder Mercantile.”

Jacoby’s experience working in Tenakee and sourcing local lumber for the refurbished Snyder Mercantile is an important piece of the story of the Back Door’s alder benches.

But he didn’t use alder for the Snyder. The Back Door project has been an eye-opener.

“It just shaves like butter. Very malleable and ridiculously strong. The grain patterns and the colors are phenomenal. I actually requested knots, because I wanted it to stand out, and you get the feel on the benches. Everything was tight-knot — not quite to the point where you could build a boat out of it, but pretty gosh-darn close. Very impressive product.”

Jacoby sourced the alder from Wes Tyler, who operates Icy Straits Lumber in Hoonah. In an email, Tyler told me that he’s lucky to cut between 5- and 10-thousand board feet a year of alder, mostly along old logging roads, where it thrives in the disturbed soil.

In the Back Door Cafe.

This is alder’s real claim to fame: It germinates and grows rapidly anywhere the forest has been damaged — by logging, or any kind of development. Turn over one shovel-full of soil and an alder may grow there. It’s nature’s band-aid.

“It puts nitrogen back into the soil,” says Sitka District Ranger Perry Edwards with the Tongass National Forest. He joins me for a cup of coffee.

“And so in nature’s master plan it comes back and adds nitrogen to the soil, which is then usable by spruce and by cedar and by hemlock. So it’s that first thing that kind of gets things going, and sets the stage for the next.” 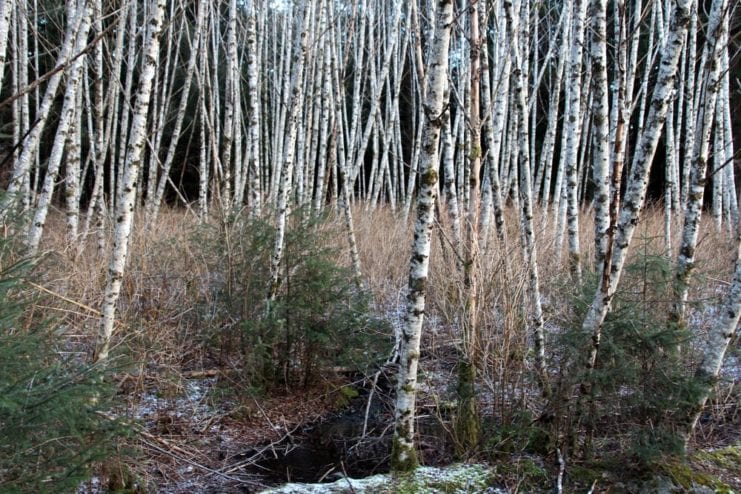 This stand of young alder behind Sitka’s former Kimsham Landfill fixes nitrogen in the gravel soils. The small spruce and hemlock conifers will eventually grow up through the alders and shade them out. (KCAW photo/Robert Woolsey)

Edwards (who sits on the board of KCAW) is a different kind of district ranger. He’s a biologist first, and a timber producer second. His district is heavily involved in habitat restoration in the aftermath of old-growth logging. He is upbeat about alder for a lot of reasons, mainly that it grows quickly on existing roads. Now it’s just a matter of connecting the industrial dots.

“The first thing I think is that the loggers and the mill folks we’re working with need to figure out how to use this stuff. It’s just not something they’ve been using — the smaller diameter logs — so there’s that learning curve. How does it dry differently, and how does it work differently?”

The Back Door used to have secondhand upholstered church pews for seating. Comfortable and homey, yes; stylish and long-lasting, not so much. Upstairs in her office, owner Alana Peterson tells me that she first considered refurbishing the old benches.

“It was so much money. Thousands of dollars.” says Peterson. “And it makes perfect sense that it would cost that much with the labor and materials. But I realized that if I’m going to put that much money into these benches that I don’t really love, why wouldn’t I just build something that I really love? Something custom, that serves a better purpose?”

Peterson is a cafe owner, but with a professional sideline in sustainable business practices. She works for Haa Aaní (note: now known as “Spruce Root, Inc.”), the economic development arm of the regional Native corporation Sealaska. Using local wood in the Back Door wasn’t an epiphany, she says, because she’s collaborated with the Sitka Conservation Society to source lumber for a variety of projects. Using small-scale local wood is mostly a matter of connecting the same dots Perry Edwards was talking about. Peterson knew to contact Wes Tyler at Icy Straits Lumber, who saw alder as the ideal material for her cafe.

“If the contractors in Sitka, and at say, Spenards — whoever — take more interest in understanding how to get local lumber, then that would open it up to anyone who wants to do a project like this.”

Back in Chris Jacoby’s shop. 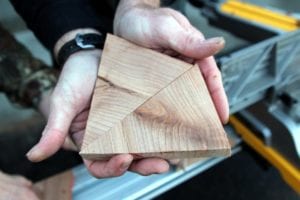 Jacoby’s success with alder comes in part from his understanding of Southeast transportation logistics. “As long as the ferries keep running,” he says, “alder is more economical than anything you could bring up from down south.” (KCAW photo/Robert Woolsey)

“It worked out great. Wes supplied the trailer. Loaded everything on the trailer for me. Put it on the ferry for me, so I just had to back onto the ferry, pull it off, and go to work.”

And because he had spent a year-and-a-half restoring a building in Tenakee, contractor Chris Jacoby understood the logistics of local shipping. Presto. An economy is formed around the once-lowly alder.

What could go wrong?

“As long as the ferry’s running, it’s far more economical than bringing anything up from down south.”

Note: In Part 2 of this series, KCAW’s Robert Woolsey examines the forces that suppressed the development of alder during the old-growth timber era, and the high price some paid advocating for alder and better forest management practices.