On the Water: One harvester’s hope for herring eggs 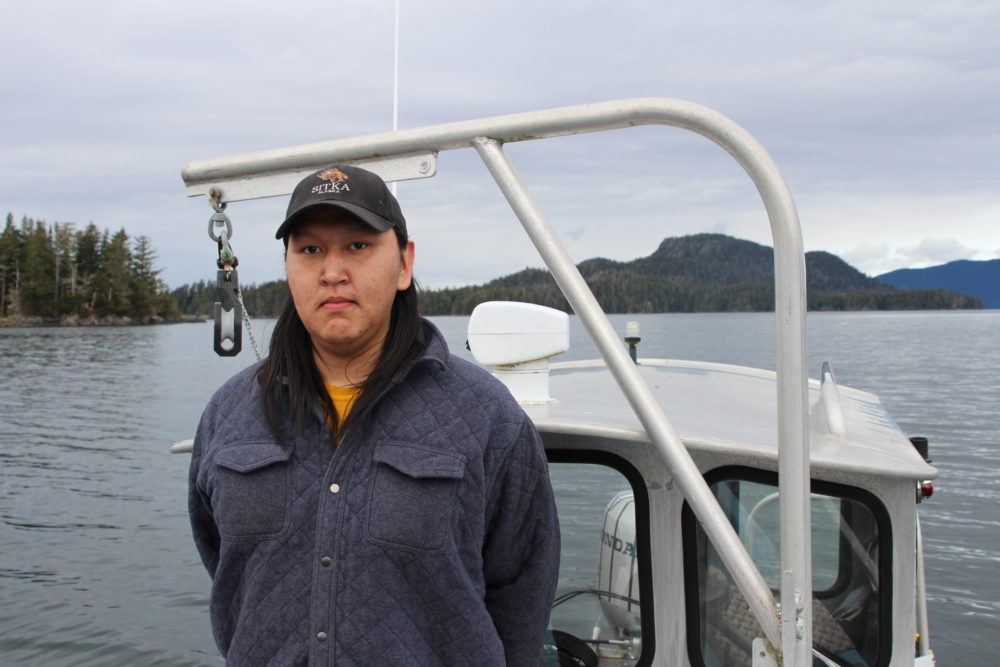 Leonty Williams grew up harvesting herring eggs. He says subsistence is in his blood. (Emily Russell/KCAW)

Every spring millions of herring return to spawn in Sitka Sound. The small, silvery fish are prized by commercial fishermen. They sell them for  their eggs, known as herring roe. Those eggs are also coveted by the Tlingit people, who harvest them by anchoring hemlock branches in shallow waters where herring spawn.

But now many are saying the herring is being threatened, some say by environmental change and others by poor management. Other simply question the health of the stock, their branches this year coming up bare.

Hope– it’s a word Leonty Williams uses a lot, especially when it comes to herring eggs.

“We’re kind of still holding out hope here,” Williams says. “We’ve never had to pull our branches up this late or anything. It’s just never happened.”

I meet Williams next to his boat– a 24 ft fiberglass outboard he keeps docked in town. He’s headed out to Kasiana Island, a couple miles northwest of Sitka. Williams has been setting branches there all his life.

He turns the engine on and lets it warm up.

“It’s probably about ready. Do you want to ride in the front or come in the cabin?” Williams asks.

There’s one plastic white lawn chair in the front that looks like it would tip over with the tiniest of waves. I climb on board and into the cabin.

It’s springtime in Sitka and for once it’s not raining. It’s also pretty warm out, which Williams says is a good sign for the herring.

“The herring kind of wait until usually the water warms up a little bit– to about 42-44 degrees, [that’s when] they start doing their spawning,” explains Williams. 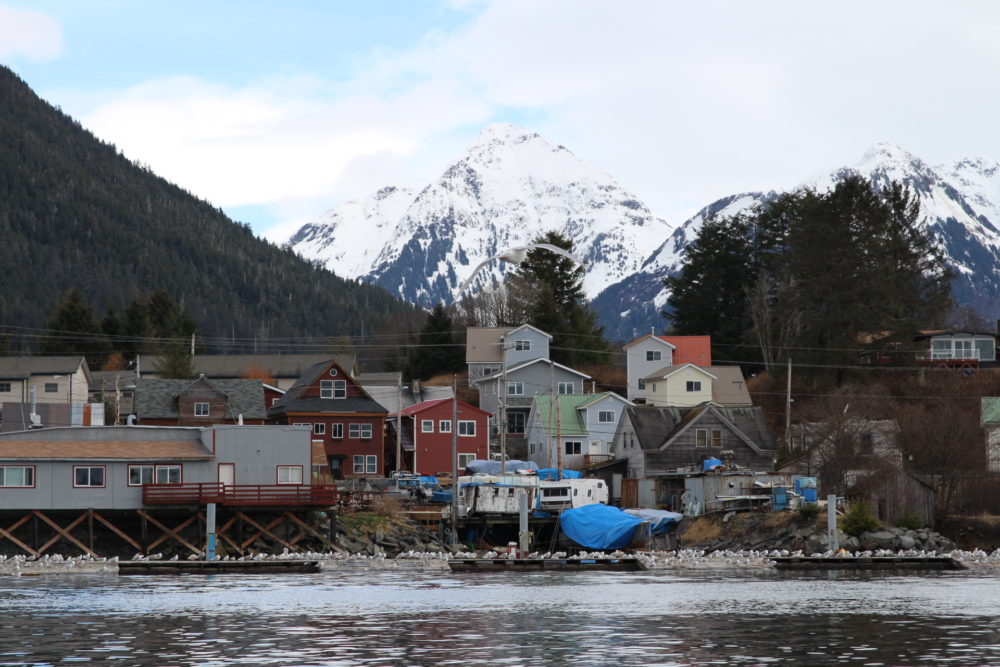 Gulls are often a sign of herring spawn, but Leonty Williams says there are even less gulls. (Emily Russell/KCAW)

Williams is young– just 26 years old, but he’s full of little facts like this. He grew up harvesting herring eggs and as we wind our way through the harbor, he tells me about his family, says subsistence is in his blood.

“Full blood Alaska Native– half Tlingit and my mom is from up above the Arctic Circle, a little village called Noorvik,” Williams says. “She’s full blood Inupiaq, so [I’m] half Tlingit, half Inupiaq.”

He spent the first nine years of his life with his family on an island about an hour from Sitka. It was there that he learned how to hunt and fish and forage.

“This boat actually gets used quite a bit for quite a few different things,” explains Williams. “Seaweed is starting to sprout on the rocks here, so we’ll be heading out to harvest seaweed soon, too.”

He also harvests sea otter, harbor seal, and sea lion from this boat. He’s got a business selling fur hats and slippers. But today, it’s all about herring eggs.

“We started getting a little hopeful once the herring did spawn over towards Middle Island,” William says. “Usually Middle Island hits then and maybe a week or a little sooner after they start moving towards Kasiana [Island], which is where we’re going to go check on them now.”

Once we’re beyond the breakwater, Williams speeds up and over the waves. It’s just a ten minute ride to where he’s set his branches. He swings the boat around into a little cove, where the water is calm.

“Yeah, you’ve got all these islands around this area to protect from the waters,” says Williams. 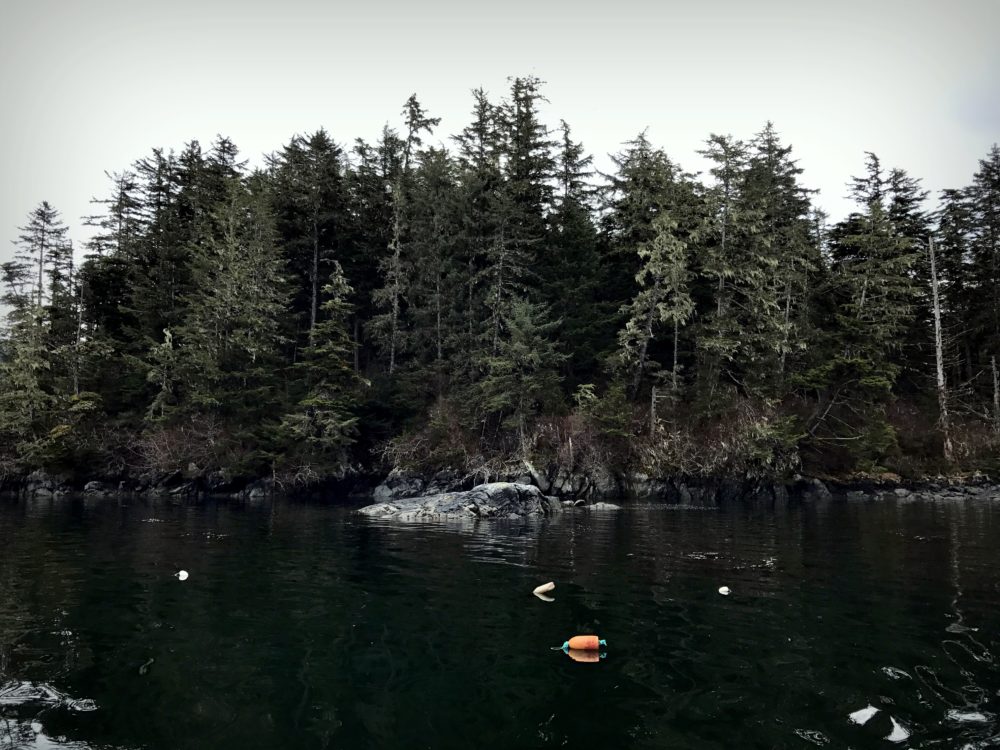 Buoys are attached to hemlock branches, which hang below the surface. (Emily Russell/KCAW)

The water is dark green, almost black. It’s speckled with your typical bright colored buoys, but others are makeshift, from clear plastic water bottles or old plastic oil jugs.

There are probably 25 to 30 sets of hemlock branches suspended below the surface from these buoys.

“We’ve got four branches set out here. I think we’re just going to try to cruise on up and check out this orange buoy.”

Williams slows the boat to a crawl. He slides open the cabin door and swings around to the front.

“This is a little bit more difficult today. I usually have one or two other people with me,” Williams explains.

He grabs onto the orange buoy and pulls it out of the water, peering down to just below the surface.

“About what I expected.”

The branches are bare. No signs of spawn. It’s what a lot of people have been expecting this year. Elders like Harvey Kitka say the water was so thick with herring it would sound like a hail storm.

Even Williams says he remembers waves full of herring washing up on shore. But now?

The fear is that commercial fishermen are taking too many herring, sweeping up thousands of tons of the silver fish before they can lay their eggs.

Management biologist from the Alaska Department of Fish and Game are supposed to set sustainable limits, but Williams doesn’t think that’s happening.

“I grew up doing this, but there are kids in our culture right now who are growing up and not learning how to do all that,” Williams explains. “It’s alarming.”

Still, he says, maybe if the water was a little warmer, if the tide was a little lower, maybe we’d see some signs of spawn.

“We’ll see,” Williams says. “Hope is about all we can have right now.”

Williams says he’ll be back to check again in a few days.