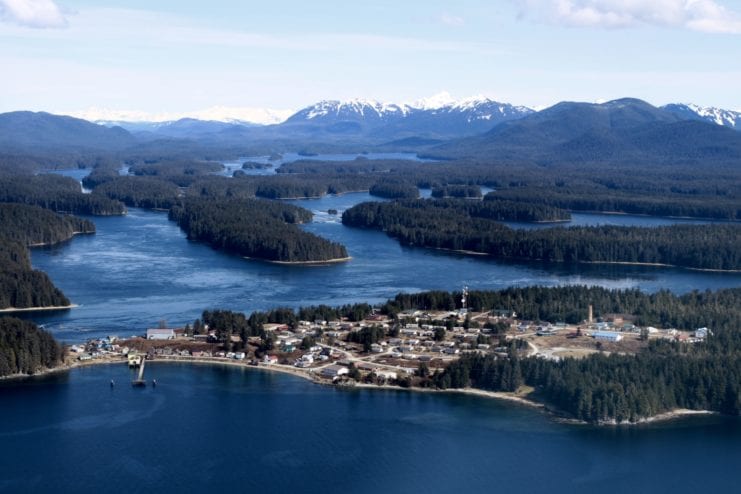 Aerial view of Angoon, located on the western side of Admiralty Island. (Emily Russell/KCAW Photo)

The City and Borough of Juneau is looking to expand its boundaries on Admiralty Island. That island is home to Angoon, a community of about 500 people, some of whom fear a nearby land annexation would threaten their subsistence lifestyle.

A meeting between Angoon and the City and Borough of Juneau was supposed to take place this week, but was canceled at the last minute.

Albert Howard grew up in Angoon. He’s served two terms as mayor,  is now a member of the Regional School Board and serves as vice president of the local tribe.

“I pretty much lived here my whole life,”Howard said. “I know one end of the island to the other because I’ve hunted it with my dad and now I’m hunting it with my son.”

Sometimes they don’t see much on those hunting trips, so Howard talks to his son about the land and their rights to it.

In the late 1970s Admiralty Island became a National Monument, in part because of its cultural significance.  It’s been inhabited by Tlingit people for over 10,000 years.

“Anything that happens on Admiralty Island is for the protection of the indigenous people of the Island. It’s in [National] Monument language and it’s stated that way. You can find it online,” Howard explained.

“It doesn’t say anything about the City and Borough of Juneau,” Howard added. “That’s pretty clear in the language.”

Howard and others in Angoon are worried specifically about a place called Pack Creek. It’s on eastern Admiralty Island about halfway between Angoon and Juneau. Pack Creek is a popular bear-viewing place for tourists and hunting spot for locals. 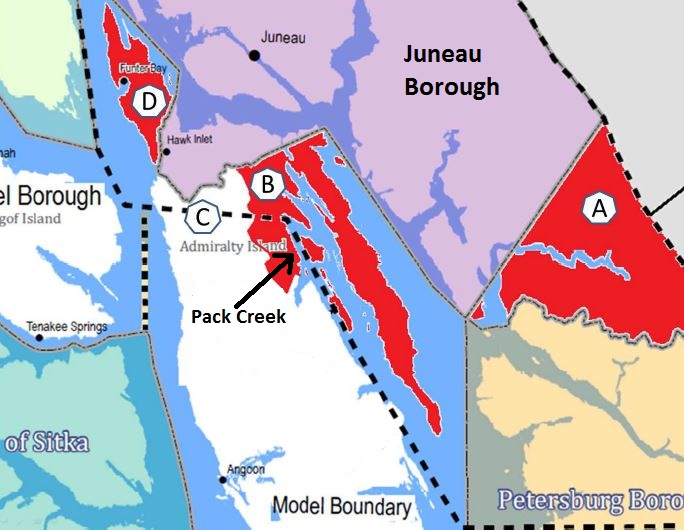 The City and Borough of Juneau is looking to expand into the red areas (A, B, and D). Pack Creek is within area B. (Map from a memo to the Juneau Lands Committee)

Howard worries if that section of Admiralty Island is annexed, it’s resources could be auctioned off.

But Rorie Watt, Juneau’s city manager says that won’t happen. “If land was annexed into the Juneau borough, that does not change land ownership,” Watt explained.

“So, with the example of Pack Creek, that would be in the Admiralty Island National Monument, managed by the Forest Service. So even if we annexed that, it would not become City of Juneau land. It would still be Forest Service [land] under that management style.”

And that Forest Service land in the Pack Creek area is protected from development since it’s inside a national monument.

So why would Juneau want to annex the land if it can’t be logged or mined or commercially developed?

“There’s a lot of reasons,” Watt explained. “If you look at the state and the constitution, the idea behind it is sooner or later the entire state ends up in a borough.”

So, basically incorporating it before anyone else does.

Alaska’s constitution says the state must be divided into boroughs, either organized or unorganized. A study completed in the 1990s laid out possible borough models. 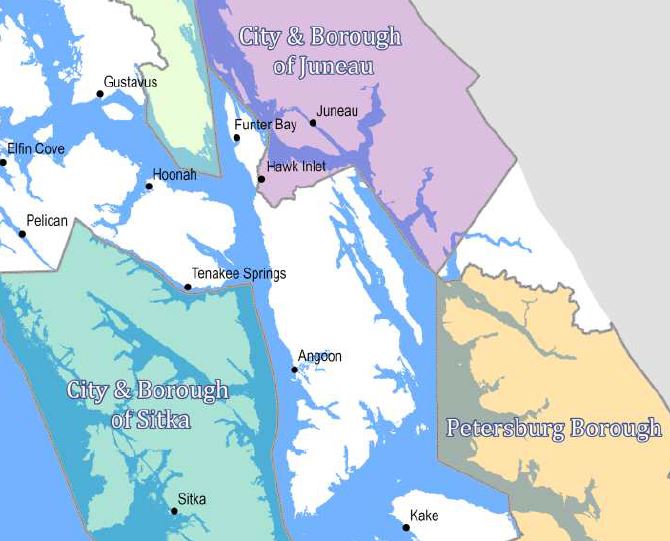 Article X, Section 3 of Alaska’s constitution requires the entire state to be divided into boroughs, organized or unorganized. Most of Admiralty Island is in an unorganized borough. (Map from a memo to the Juneau Lands Committee)

Right now most of Admiralty Island is considered an unorganized borough and remote residents like it that way. Property owners in Funter Bay on the north end of the island wrote to the Juneau Assembly is February. They don’t want to pay additional taxes or adhere to zoning regulations.

Watt said there’s no way of knowing how much in property taxes this land annexation would bring Juneau, since those properties in the unorganized borough have never been assessed.

There are benefits to being part of the borough, Watt said, like zoning, which ensures the land is managed responsibly.

“What we would say to Angoon or anybody else who had property in the areas that we’re looking at is that we think there is an economic nexus or cultural nexus or recreation nexus between the areas we propose to annex.”

And Juneau representatives wanted to say that in person this week. Watt and other city officials had planned a trip to Angoon, but the mayor of Angoon, Harriet Silva who declined to comment for this story, cancelled the visit.

Watt said it’s still early on in the process. He hopes to reschedule a visit to Angoon and expects to host public meetings in Juneau in the coming months.