An out-of-service tugboat that sank in Sitka last week – spilling oil – may soon be salvaged.

Alaska Commercial Divers will arrive in Sitka tomorrow (04-25-17) to assess the 81-foot Powhatan, which sank at its dock Wednesday night and drifted along the bottom about 330 meters into Starrigavan Bay.  The Powhatan is owned by Samson Tug & Barge.

A containment boom surrounds the vessel and Samson dock to contain the oil spill. Containment and sorbent boom is also deployed at the mouth of No Name Creek and a small creek on the north side of Starrigavan Bay, near the picnic area.

The Alaska Department of Environmental Conservation recommends that subsistence harvesters not collect shellfish while there is still oil in the water. The DEC is monitoring for oil sheens and any effects on wildlife.

The 81-foot tugboat Powhatan – owned by Samson Tug & Barge – sank at its dock in Starrigavan Bay. The tug then slid under the pier and drifted about 300 yards offshore, where it was located by divers from Hanson Maritime Company. The Coast Guard reported the spill at 10:15 p.m. that evening.

On board were 325 gallons of lube oil, 12 gallons of diesel, and possible sludge. It’s not known how much oil was spilled into the water or why the tug sank. The Powhatan has been out of service for ten years. 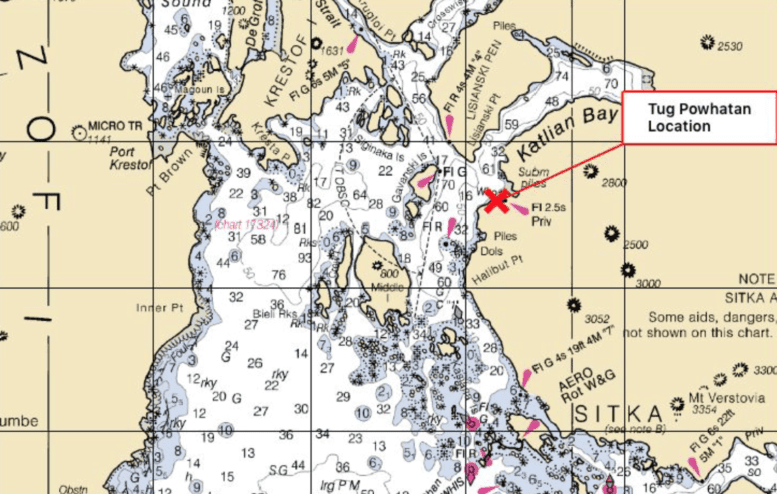 The Powhatan is owned by Samson Tug & Barge. It was located by divers 330 meters offshore and 60 meters below it’s resting location. (Map provided by NOAA)

Along with Samson, the U.S. Coast Guard, Alaska Department of Environmental Conservation, and the Southeast Petroleum Response Organization responded to the scene, surrounding the tug with booms to contain the oil.

According to the state’s situation report, marine life – like sea otters and birds – may have been exposed to the oil, but there have no reports of that in the immediate area. DEC is recommending subsistence harvesters not collect shellfish while there is oil in the water.

DEC and SEAPRO remain on scene, setting and maintaining the booms, assessing the shoreline, and monitoring impacts to wildlife. According to the state’s situation report, an underwater camera may be used to monitor for further oil and fuel leakage.