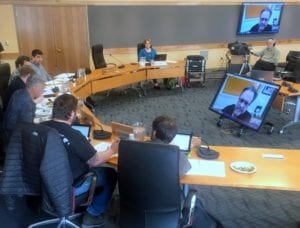 The administrator hire began with a pool of 50 candidates in February, and was narrowed to three by the time utility director Bryan Bertacchi was interviewed in March. Bertacchi and Sitka fire chief Dave Miller subsequently withdrew their names. Police chief Sheldon Schmitt submitted a late application, but the assembly declined to offer him, or Homer public works director Carey Meyer, the job. (KCAW photo/Robert Woolsey)

The Sitka Assembly Tuesday night (4-25-17) will reopen advertising for a new city administrator.

The assembly last Wednesday (4-19-17) conducted in-person interviews with two finalists, Homer public works director Carey Meyer and former Sitka police chief Sheldon Schmitt. After speaking with each of the candidates for an hour, the assembly decided to offer the job to neither.

In an email to KCAW, member Bob Potrzuski wrote, “Personally, I am looking for an experienced administrator who has put together budgets and managed various departments and enterprise funds. The right person for me will be bringing ideas with them as a way to navigate our current situation.”

Potrzuski and some other assembly members have been leaning toward retaining a recruitment firm to take over the hire. Included in Tuesday’s (4-25-17) meeting packet is a proposal from The Prothman Company for $20,500 plus expenses. Prothman is based in Issaquah, Washington, and specializes in executive recruitment for municipalities in the Pacific Northwest.

Sitka human resources director Mark Danielson says Prothman’s first step would be to meet with the assembly and with the public to develop a profile of the kind of administrator that the community wants, then do a targeted search for the position. In its proposal, Prothman says the assembly could be conducting final interviews with candidates the week of August 7.

Danielson says Sitka used Prothman once before, to hire the city’s controller. He’s very impressed with their work. “Executive recruitment is all they do, every day,” he says. Prothman guarantees its candidates as well. If the executive is fired or leaves within a year, the firm will recruit a replacement and charge only expenses.

Alternatively, the assembly could choose to simply re-advertise the hire the traditional way, but Danielson is not optimistic. “The year 2000 was peak newspaper,” he says. “It’s now moved on to really specialized recruiting online.”

Current city administrator Mark Gorman is stepping down on June 15. His replacement will earn an annual salary of $135,000.