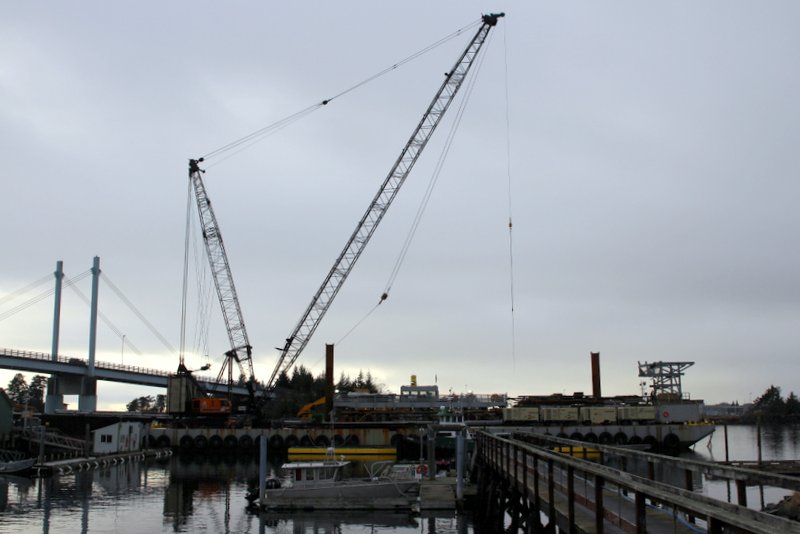 Turnagain’s Brightwater barge and crane at work on the Petro Marine fuel dock last winter. The same equipment will be used to build the dock at the Gary Paxton Industrial Park — unless the court rules the contract illegal. (KCAW photo/Robert Woolsey)

Dapcevich filed the amended complaint in Sitka Superior Court last Tuesday (4-18-17), and it was served in municipal offices on Friday. City Hall has 20 days to answer from the date the document was served.

In his original complaint, Dapcevich named only the City and Borough of Sitka and Mark Gorman — in his role as administrator — as defendants. The decision to now include Gorman and Mayor Matt Hunter — as individuals — is based on a provision of the Sitka Charter (XI.13.d) which holds that “officers” of the city may be individually liable for illegal payments made in violation of the charter.

Dapcevich is being represented by Juneau-based attorney Joe Geldhof. Reached by phone, Geldhof says that the decision to amend the lawsuit came after the city rejected two settlement offers from his client.

“After consideration Mr. Dapcevich elected a phased, escalated approach with opportunities to settle,” Geldhof says. “He was disappointed — but not surprised that two offers to settle have been rebuffed.”

Dapcevich offered to settle his lawsuit if Sitka cancelled its $6.5 million contract with Turnagain Marine Construction to design and build a floating dock at the Gary Paxton Industrial Park. Additionally, Dapcevich asked to be reimbursed $1,200 in legal expenses to date, and he asked for the resignation of administrator Mark Gorman.

Sitka declined to settle with Dapcevich. Instead, the city has hired Anchorage attorney Michael Gatti to handle the matter.

Neither Gatti or Geldhof are strangers to legal conflict over Sitka’s industrial park. The city hired Gatti to support its defense against Sitkans for Responsible Government, who tried unsuccessfully to put a voter initiative regarding park land disposals on the ballot in 2008. SRG was represented in its lawsuit by Joe Geldhof. After 4 years of litigation, including a hearing in the state’s Supreme Court, the matter is still largely unresolved.

Sitka municipal attorney Brian Hanson remains confident about the city’s position in the Dapcevich lawsuit. “We’re going to vigorously defend our position, and I have confidence that we’ll prevail.”

Earlier this month Dapcevich exercised his option to replace presiding Sitka Superior Court judge David George. Although the case remains in Sitka, it has been assigned to Judge Trevor Stephens of Ketchikan.