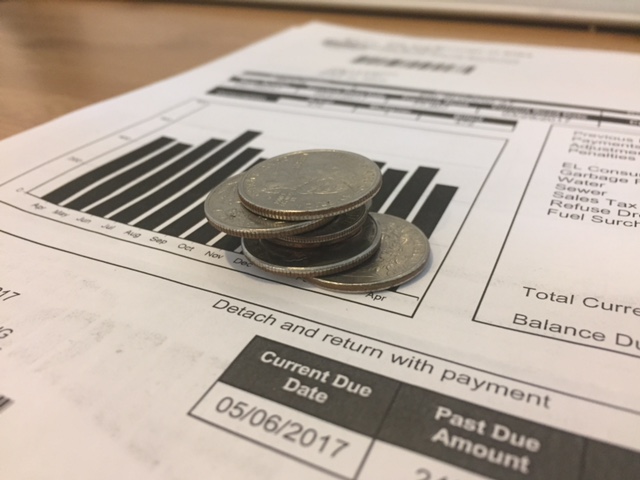 When approving of the Blue Lake Dam expansion, the 2012 assembly discussed how rates may rise to 15 cents/kwhr. That prediction came true at Tuesday night’s (04-25-17) Assembly meeting. This is the fifth rate increase in five years. (Emily Kwong/KCAW photo)

Starting this week, Sitkans will be charged 15 cents a kilowatt hour for their energy use. The Assembly gave final approval to a rate ordinance Tuesday night (04-18-17) that fulfills the predictions of the past, but at what cost to the future?

This latest rate hike is the biggest Sitka’s had in the past five years. Residential customers will go from paying 12 cents to 15 cents a kilowatt hour and be charged that amount no matter how much energy they use. To some, the bump is outrageous.

“The fact of the matter is, no matter how much you raise the property taxes and those electric bills, that dam is not going to be paid for,” said Karen Lucas at a recent Assembly meeting.  She’s giving voice to the opinions of a lot of people here: that no rate hike will be enough to pay for a dam so expensive. But to others, this bump is preordained.

Travel back in time to September 2012. Taylor Swift’s “We Are Never, Ever Getting Back Together” was top of the charts. Oil was $96 dollars a barrel. And the Assembly was deciding whether or not to raise the wall of the Blue Lake Dam by 80 feet to meet growing energy demands in town. Mike Reif, who was on the Assembly, asked then-Utility Director Chris Brewton how much it would all cost.

Reif: “The rates are going to be somewhere around 15 cents a kilowatt (hour) in the year 2017, and when this project originally cost roughly $100 million, they were going to be roughly 2 cents lower than that.”

In retrospect, fifteen cents was the target rate the moment the Blue Lake project cost ballooned and the Assembly went ahead with construction, borrowing millions from the Alaska Municipal Bond Bank. And that debt was always going to be passed down to ratepayers. In that meeting, Reif then said, “So this is going to cost us – this extra $40 million – is going to cost the average consumer in Sitka $300 a year – the average resident.”

Flash forward five years and with this latest bump, electric rates in Sitka will have increased 50% since the dam was given the green light – after being static for much of the 1980s and 1990s.

On Tuesday night, Mike Rife came back to tell the Assembly a story from the era when Rocky Gutierrez was Mayor. The pulp mill had just closed and then, as now, Sitka’s financial position was shaky.

“Every once and awhile, I’d go down and have coffee with Rocky at McDonald’s,” Reif recounted. “And one day I asked him, ‘How do you make your decisions. How do you weigh the different factors?’ Because when you’re talking about people’s pocketbooks, it’s serious. And a lot of times they’re up here saying, ‘No, no, no.’ And what he shared was, ‘I’ll listen to the people, the people in the community. But also I’ll close my eyes and try to listen to the next generation.’ Because they matter. If you just take care of today, tomorrow’s people will have to pay for it,” Reif said.

A look at how your electric bill may change. Seasonal rates for residents, boats, and small commercial users begin in October, charging 12 cents in the summer and 19 cents in the winter.

In that vein, Reif urged the Assembly to stand by their decision to set rates at 15 cents from now until October, at which time a seasonal rate structure will kick in – 12 cents in the winter and 19 cents in the summer. The group seemed visibly comforted by this voice from the past.

That plan includes prodding Sitkans to use the city’s hydropower. Once upon a time, the Assembly was telling Sitkans to conserve energy. Now that there’s a surplus, there’s a new message: to use electricity is to support the next generation of Sitkans.

“Our electric department is a not-for-profit and the more we use – every single dollar you spend – goes back into the community,” Assembly member Tristan Guevin said. Assembly member Kevin Knox added, “For those who can’t afford it, I’d like to encourage you to stay with it because it does help our kids.”

It’s a hard sell. The winters have been warm, diesel is cheap, and electricity usage in Sitka has steadily declined, an outcome that wasn’t accounted for when the Blue Lake Dam was constructed. Other costs – from groceries to property taxes – have risen in Sitka. Those on a fixed income are struggling; one third of year-round residents make under $40,000 in household income a year. 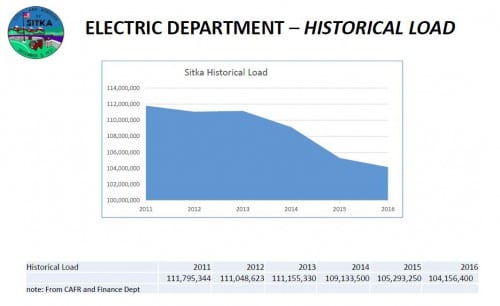 Between 2012 and 2016, four years since the dam project was approved, usage has declined to 104 million kwhr/year. With customers using less, the city is unable to keep up with bond payments and has to draw from savings and raise rates. (Graph from CBS Utility Department)

For those Sitkans who can’t afford their bigger electricity bill, some on the Assembly want to provide a monthly subsidy.  At the urging of Guevin, they’ve penciled $400,000 into their FY18 budget for a utility assistance program. Not everyone at the table is a fan of the idea. The program may come at the Assembly’s next budget meeting on Tuesday, May 2nd.

This rate hike almost didn’t happen. The Assembly voted it down at their March 28th meeting, until Mayor Matthew Hunter put it up for reconsideration at their April 11th meeting. At that point, the text had to be amended to reflect the start date for the new rates as April 26th and thus required a second reading and final vote Tuesday night.

Due to the delay, the new rate structure won’t raise enough money to fulfill this year’s bond obligation. To make ends meet, Assembly decided to patch the hole with $400,000 from the general fund.

On the appropriation and the rate ordinance,  the vote was 4-1 with Aaron Bean voting no. Assembly members Steven Eisenbeisz and Aaron Swanson were absent.