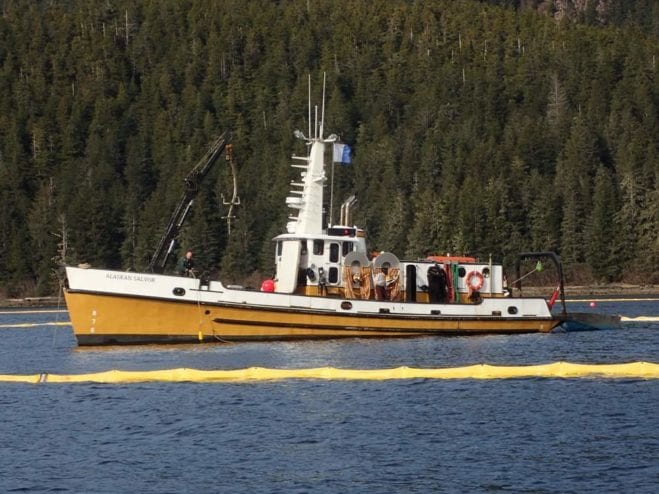 Alaska Commercial Divers arrived on Tuesday (04-25-17) aboard the Alaskan Salvor to assess the tugboat for salvage and stem further oil release. (Bob Mattson/ADEC)

Alaska Commercial Divers (ACD) arrived on Tuesday (04-25-17) on their vessel the Alaskan Salvor. They capped the Powhatan’s main fuel tank vents by 2 p.m. in the afternoon, which appear to be the primary source of oil release from the sunken vessel. 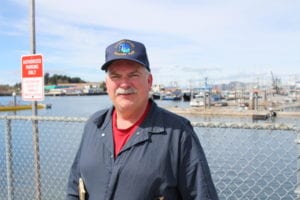 Bob Mattson of the Alaska Department of Environmental Conservation oversaw the state’s initial response to the clean-up. (Emily Kwong/KCAW photo)

Bob Mattson is the state’s On Scene Coordinator with the Alaska Department of Environmental Conservation (ADEC). He previously assisted with a 2500 diesel spill in Sitka in 2015. Of oil spills, Mattson said, “The amount of things you don’t know tends to outnumber what you do.”

Mattson explained, “There’s two sources of oil. One is the vessel itself. Monday and Sunday, close to high tide, the vessel gave a burp. That’s a technical term. So a sudden release of an amount of oil. And the other source is under the dock itself. Because obviously it was a very violent event when the vessel sank.” 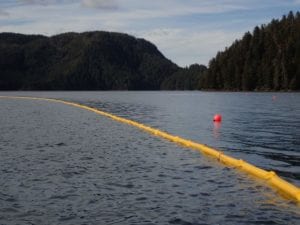 The perimeter of the tugboat is wrapped in containment boom. Boom is also placed around the dock where it sank and the beaches of North Starrigavan. (Bob Mattson/ADEC)

Out of service for 10 years, the 81-foot tugboat sank on April 19 at a floating dock. The undersea slope and remaining buoyancy carried it into Starrigavan Bay, where it currently rests 60 meters below the surface and 330 meters offshore. Both the boat and the dock are wrapped in containment and sorbent boom.

Samson estimates there were 325 gallons of lube oil, 12 gallons of diesel, and possible sludge on board. President George Baggen could not be reached for comment.

As for the cause of the sinking, Mattson said, “That will probably come to life when the vessel is raised.” ACD is making additional dives to asses the vessel for salvage. “You don’t want to do anything too quick,” Mattson said. “The better and more methodical you plan, the safer it will be.”

The state is recommending members of the public not harvest shellfish nor swim in the area. (Bob Mattson/ADEC)

ADEC and the U.S. Coast Guard remain on scene,  conducting shoreline assessments twice a day to monitor for oil sheens at the Old Sitka Boat launch, Starrigavan Bay, and No Name Creek. “The herring eggs and now the herring larvae is a concern,” Mattson said. “The salmon fry have emerged. For fish species that’s important. We think that containing the two sources – the vessel and the dock – and sorbing up the oil will be good for that.”

The state has posted warning signs along the beach, discouraging the public against swimming in the water or harvesting shellfish along the beach – especially in places where oil is visible or can be smelled.  Weathered oil sheens have been found in the clam beds of North Starrigavan Bay. For more information, call the Department of Health and Social Services at 269-8000.