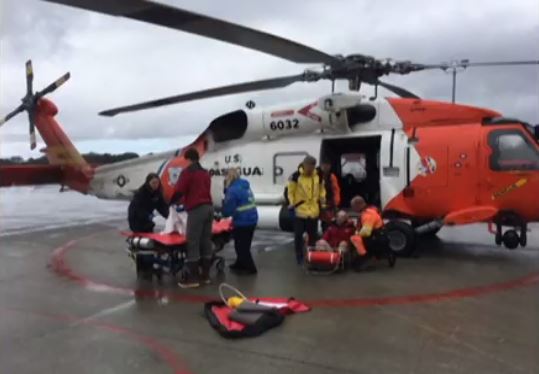 An injured hiker is transferred to EMS personnel at the Sitka airport. (USGS video capture)

An Air Station Sitka helicopter rescued an injured 70-year old hiker from the Japonski Causeway Friday morning (4-28-17). That evening, they delivered a pump to vessel in distress.

The Coast Guard command center was notified by phone at around 10:30 a.m. Friday that the man, who was hiking across the causeway at low tide, had slipped and fallen, sustaining injuries to his head and neck. A helicopter from Air Station Sitka was on scene in minutes, and hoisted the man and transported him to an ambulance at the airport.

The Air Station is located just across Whiting Harbor from the Causeway, and this proximity may have made a difference for the hiker. In a news release, Petty Officer Francell Abbott stated “This man was in a bad situation, but the fast response of the Sitka aircrew prevented it from becoming worse.”

Weather on scene at the time of the hoist was heavy rain.

According to a dispatch report, the a pair of boaters called 911 on a cell phone at around 11:30 p.m. and notified Sitka police that their 26-foot Glasply was taking on water 10 miles north of Sitka. They reported having no survival gear other than float coats. They also had a dog with them.

Air Station Sitka successfully delivered a dewatering pump to the boat, and a good Samaritan vessel took it under tow back to town.