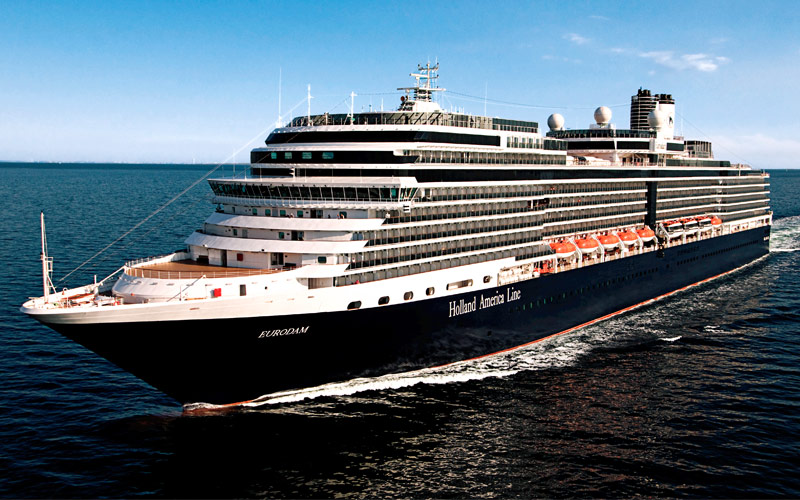 With a 24-hour storm warming, the Eurodam has canceled its port of call to Sitka. The vessel, with a passenger count of 2104, is scheduled to dock in Sitka every Wednesday. (Holland America)

Sitka’s first cruise ship of the season canceled its port of call due to bad weather.

With over 2000 passengers aboard, the Eurodam was scheduled to tie up at the Old Sitka Dock from 7 a.m. to 3:30 p.m. tomorrow, as it will every Wednesday this summer. But with a storm on the horizon, the Holland America ship will proceed directly from Skagway to Ketchikan.

Sitka’s port director Fred Reeder, said a May cancellation is rare. The storm is expected to last 24 hours. “Cape Fairweather down to Cape Ommaney, [the forecast says] maybe 70 knot winds and seas to 22 feet. Tonight and tomorrow. And then lessening Thursday, down to 15 knots and seas to 14 feet,” Reeder said.

The first cruise ship of the season will now be the Oosterdam, which arrives 8 a.m. on Thursday.

The industry estimates 160,000 cruise ship passengers will visit this summer, a volume Sitka hasn’t seen in years. In 2012, the passenger count was half that. Reeder attributes it to the construction of a deep water dock, able to accommodate bigger ships, and the health of the global cruise industry.

“Alaska is still a good destination. It’s a safe destination in people’s minds. And cruise ships have built a few more ships and they like coming to Alaska,” Reeder said.

The cancellation buys some time for local retailers and tour guides to prepare for the summer season. Between big companies – like Royal Caribbean and Celebrity – and small operations like Allen Marine and Un-Cruise Adventures, 200 ships are expected to visit Sitka between now and September 30th.