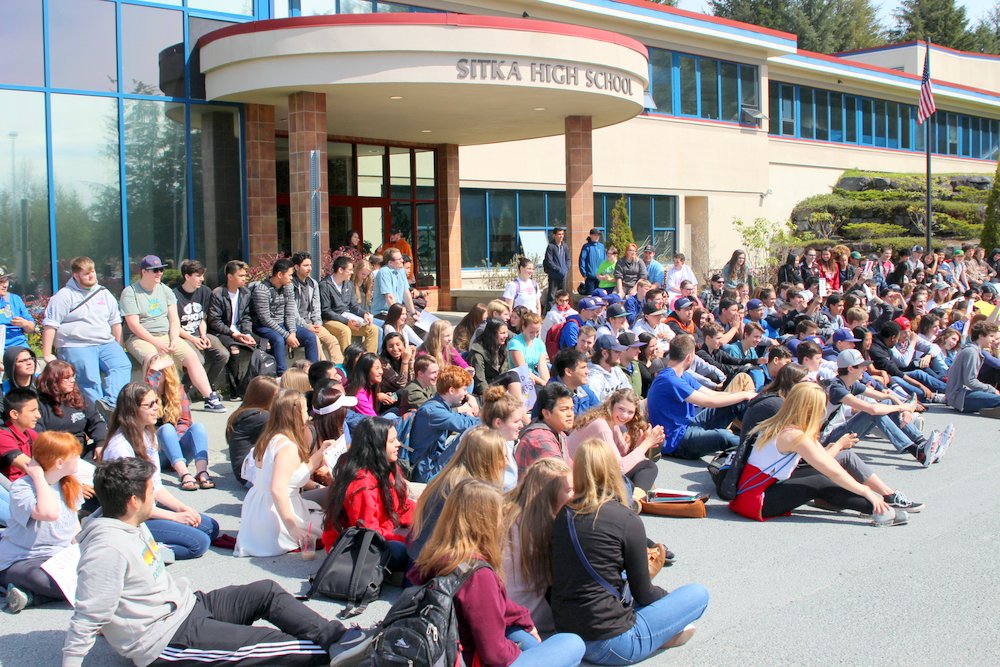 The student body of Sitka High School walked out of about 10 minutes of class in order to assemble and protest the Alaska Senate’s proposed cut to education. (KCAW photo/Robert Woolsey)

Most of the roughly 400 members of Sitka High’s student body — many carrying signs — filed through the front doors of the school a little after 11:30 and sat down in the parking lot. 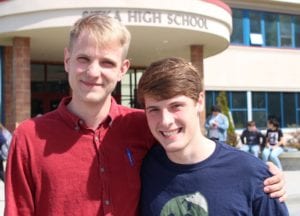 Juniors Elias Erickson (l.) and Anders Marius said they organized the demonstration on less than 24-hours’ notice. “We wanted to put faces to these cuts,” they said. (KCAW photo/Robert Woolsey)

Marius – No! We don’t want to lose the funding from our education budget, and we do care about our schools, and we care about our teachers.
Erickson – Absolutely. The senate went to Juneau this year to fix our state’s fiscal crisis. They went there to solve the problem. And this is not the solution to the problem. This will only create more problems and hurt Alaskans’ educations. Can we all agree on that?
Students – cheering…

Governor Walker, and the bi-partisan majority in the Alaska House of Representatives have offered to hold education funding flat next year. The Senate Finance Committee, however, has held onto a plan which would cut around 5-percent of the base student allocation — for an estimated savings of $69 million across Alaska’s 53 school districts.

But Marius and Erickson say the cut represents no savings at all — only harm. Both are juniors, with another year in the public school system.

Erickson – You know we are the face of these cuts. These cuts to education that they propose, we are the ones who get hurt by that. We wanted to come out and show them that.
Marius – And we think that the 5.7 percent cut is not worth it, because it’s funding Alaska’s future. We are the future generations, and this is how Alaska builds its future, through its education system. So we want the senate to fund the future of Alaska. 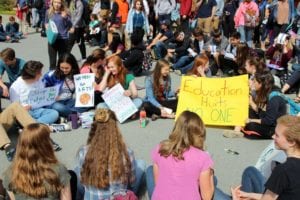 Students chanted “We support our teachers!” Sitka School Board member Jennifer McNichol, who attended the protest, said the cuts would cost the Sitka district over $700,000. “It translates into teaching positions,” she said. (KCAW photo/Robert Woolsey)

Not everyone at the demonstration was a student.

McNichol – I’m Jennifer McNichol. I’m on the Sitka School Board and here representing myself.
KCAW – Do you have a number? What it means for the district?
McNichol – I believe the number is about $700,000. Give or take. (I may be wrong there.)
KCAW – What does that translate to?
McNichol – It translates into teacher positions at this point, because we’ve cut our budget so close to the bone. There’s nothing left, unfortunately, but staffing cuts because it’s our largest expense.

The legislature was in session during the student walkout, and KCAW was unable to reach Sen. Bert Stedman for comment. The five-percent education cut is built into the state’s operating budget, known as HB 57. As of Wednesday, a conference committee of Senate and House members was appointed to iron out the differences between the two bodies, but had not yet met.