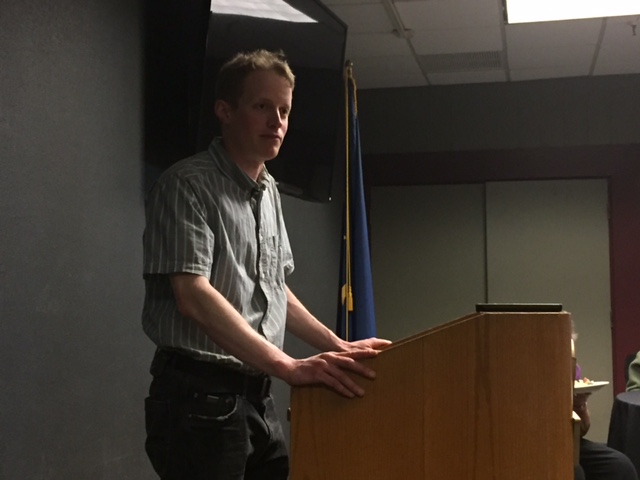 Rock quarries. Affordable housing. Sitka’s student population. These were some the fastballs pitched to Mayor Matthew Hunter at the weekly chamber of commerce luncheon on Wednesday (05-10-17), as the group spoke candidly about the city’s problems and possibilities.

Most Chamber of Commerce speakers focus on a single topic. But what if you’re a lifelong Sitkan, taking the pulse from every corner of civic life? If you’re Mayor Matthew Hunter, you open the floor for questions

“I’m just here to answer questions and have a general discussion with anyone who wishes to give ideas for how to make Sitka better in particular,” Hunter said in his opening remarks.

As the crowd of 50 munched on fish tacos, Hunter talked at length about external financial pressures on the city – like the erosion of state dollars and rising cost of health insurance. To maintain the status quo in Sitka, Hunter says, citizens will have dig deeper into their own wallets.

While visiting his girlfriend in Texas, he was amazed that 20% of the hotel bill was from taxes alone. This got him thinking outside the box. “We could use a portion of our bed tax funds to cover Centennial Hall operations or maybe groundskeeping along the Sea Walk or things like that, that could reduce our load on our General Fund that would allow us to swallow more of these health care increases and government cuts,” he said.

Though short in operating dollars, the city has millions in savings. But a lot of that money is earmarked for infrastructure – like re-paving roads and replacing harbors.

Speaking from the audience, Corey Baggen wondered if such a depth of savings was necessary. “When I was a child, we had dirt roads. I didn’t die. I grew up here. Everything was fine. We had people here, a lot of people working. I’m afraid if we don’t bring industry into this community, there’s no point,” Baggen said.

Roger Hames asked if the city was looking into privatizing or contracting out some of its services. Hunter said they had – the scrapyard was recently privatized – and was open to suggestions. He added that he’s as frustrated as anyone with the rise in living expenses and how some young families struggle to make ends meet. “It’s very tough to see other people move elsewhere and to have one of those reasons be financial.”

One benchmark of this is dwindling population in the Sitka School District. Enrollment peaked the same year the pulp mill closed. In 1993, the student population was a little under 1900 students. Now, enrollment hovers just below 1300 students.

It’s a problem the community knows well, but there are solutions being explored – particularly around housing and land development.

Travis Vaughn, owner of RE/MAX Baranof Realty, announced they want to bring a float home to Sitka this summer. The realtor also has the old U.S. Forest Service Building under contract to re-open as an apartment complex. This news seemed to hearten many in the audience, including the mayor.

Vaughn: We’ve had it under contract for 8 months. We’re going through feasibility studies. We’re getting really close to the project either working or not working.

The cost of re-model is equal to the cost of the building, so Vaughn says he’ll need to convince investors first.

There’s some action in the public sector too. The city’s Planning Department is scoping out No Name Mountain, where citizens have expressed interest in quarrying the high grade rock for sale and local use. So the ball is rolling on various projects, but Hunter encouraged anyone with ideas to come forward.

That was Hunter’s main message: the Sitka’s future will be shaped by the investment and input of citizens. At one point, he said, “This is my two cents and I’m just one person.”