In the hunt for herring eggs, Sitka Tribe calls for a smaller fishery 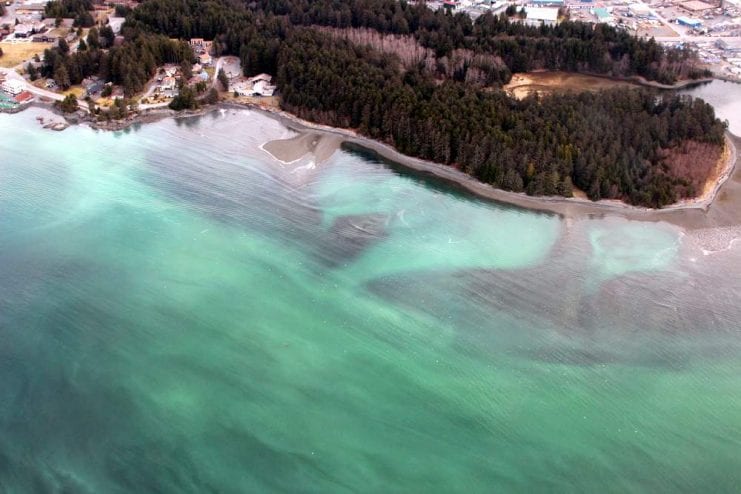 Cut open any fish from Southeast Alaska and you’re likely to find herring in its belly. Herring are a forage fish: silver, fatty and loaded with roe. Those eggs are harvested every spring by fisherman and subsistence users, who ship eggs all over the state. But as the Board of Fish prepares to discuss finish proposals in January 2018, a decades old debate is gaining traction over the stability of Sitka’s herring population.

(Sound of herring being dished on a plate)

At a potluck in April, organized by Sitka Tribe of Alaska, the star of the show is herring eggs. Some herring fans dunk their eggs in seal oil, while others mix them with mayonnaise. 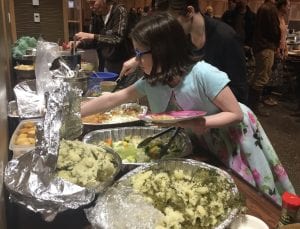 Zoe Trafton piles her plate with herring eggs at Sitka Tribe of Alaska’s annual potluck, celebrating the cultural and ecological importance of the forage fish. STA is calling for the Board of Fish to reduce cap the guideline harvest level for Sitka’s herring at 10%.

For council member Wilber Brown, the secret is a splash of soy sauce. “That first herring eggs of the year, when you bite into it, it just feels amazing!” Brown said, adding “It’s just soul food for us.”

Alaska Native people have been harvesting herring eggs for thousands of years, setting hemlock in the water and pulling the branches up days later, bundled with roe. But this year, a lot of people’s hemlock branches came up bare. In the last fifteen years, harvesters met their annual subsistence needs only three times.

Brown isn’t alone in thinking the worst: that Sitka’s herring population is on the verge of collapse.

“I wasn’t able to send any up to my aunties, up to my family,” Brown said. “It’s scary to think it will be gone.”

Gone, or significantly diminished. That’s happened in Hobart Bay, Seymour Canal, or other places in Southeast that were once major spawn sites. In Sitka, the herring population has only grown – at least that’s what the state’s data shows.

But locals can’t stop talking about how the spawn has changed: how in the 80s and 90s, every nook and cranny of Sitka Sound would turn milky white, the town wrapped in a band of fish fertility.

That’s how Jeff Feldpausch remembers it.

“The entire road system would light up and there would be spawn out there for days. It almost looked tropical,” he said.

These days, some areas once considered a herring egg cookie jar see little to no spawn. That worries Feldpausch, the tribe’s Resource Protection Director.

“It’s been basically one layer of eggs over the needles,” he said. “It’s nothing worth pulling in and bringing to the dock. We think it’s irresponsible to be harvesting at these higher rates — that we need to be more conservative since there’s so much happening in our oceans. We don’t know what those impacts are going to be.” 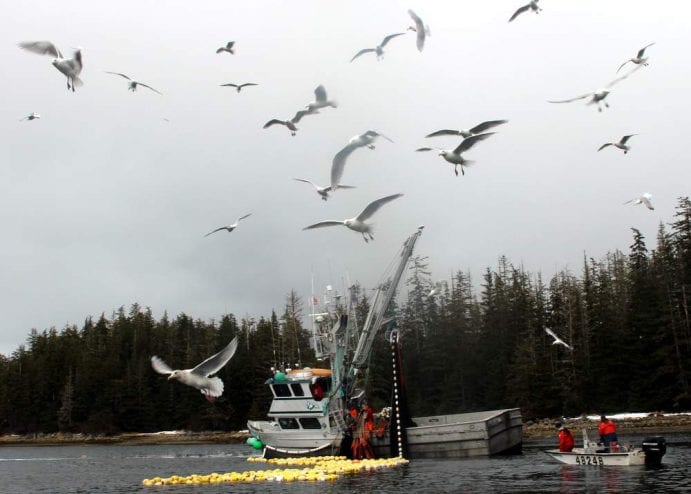 Depending on the size of the herring population that returns to Sitka every spring, the State Board of Fish allows the fleet to catch up to 20 percent. Feldpausch thinks that maximum guideline harvest level is way too high.

Sitka Tribe of Alaska has submitted a proposal to the Board of Fish (STA Proposal 99) to cap the harvest level at 10 percent and another two that would seal off zones exclusively for subsistence (STA Proposal 105, STA Proposal 106). He doesn’t want the state to close the commercial fishery, just manage it more conservatively.

That job is carried out by the Alaska Department of Fish & Game (ADF&G) and as far as they’re concerned, the herring are more abundant than ever.

Pilot: Emergency exits on either side. Handles up and back to get out of the airplane.  Emergency life vests are right here.

On Easter morning, fisheries biologist Eric Coonradt with the department is hunting for herring eggs in the front seat of a small plane. He’s clutching a pencil and scanning the water. 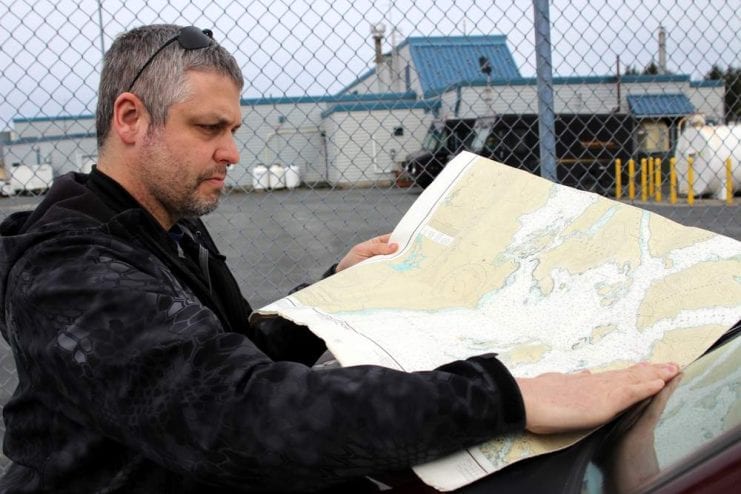 Eric Coonradt, Fisheries Biologist with the Alaska Department of Fish & Game, tracks spawn mileage on a map. While Sitka’s herring population has grown, the subsistence community has struggled to meet their harvest needs. (Emily Kwong/KCAW photo)

As we careen through the air, he marks on a map all the places where spawn is visible. This aerial spawn data will be used to forecast the size of the population — which has grown in size. Twenty years ago, the biomass was around 50,000 tons. This year, it was over 70,000. For Coonradt, that general upward trend is a sign that the ADF&G management plan is sound.

“This is probably one of the most looked at herring populations,” he said. “At least in Alaska.”

“The whole mission of the department is sustainable management and I really do think that’s at the heart of what we’re trying to do,” she said.

But I still want to know: if the biomass has grown, why are subsistence harvesters not able to meet their needs? Dressel says that’s an unanswered question for the biologists of ADF&G.

“I’m not aware that anyone has a great handle on why that is yet,” she said.

Since there’s no scientific data proving a connection between changes in herring spawn and the commercial fishery, herring management can only change at the will of the Board of Fish. They meet in Sitka in January.

At the potluck, Jean Arnold piled her plate high with roe on kelp. She hopes the biologists listen to those who struggled to harvest this year after the departure of the fleet.

Because no creature who hunts for herring eggs, whether it’s with nets, branches or baleen, wants to see a fish so critical to survival disappear.