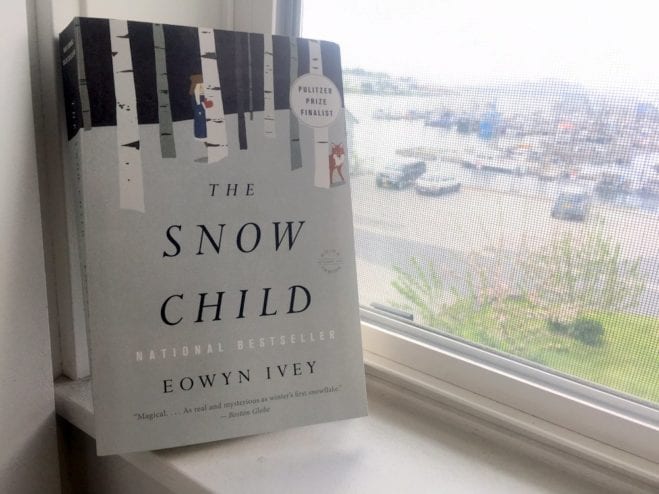 Published in hardcover in 2012, “The Snow Child” brought Ivey immediate acclaim, and a Pulitzer nomination. What could be better? Juneau’s Perseverance Theater has adapted the book into a musical which will premiere in March, 2018. (KCAW photo)

A Pulitzer Prize finalist will be in Sitka to read from her work on Tuesday (5-23-17).

When people think about Alaskan literature, chances are they’re picturing something quite different from the magical realism of Eowyn Ivey, and her novel The Snow Child. 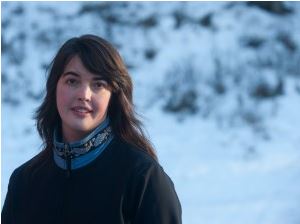 Ivey’s story — which was published in 2012 — is set in the rugged landscape popularized by Jack London, and populated by Robert Service, but is based on a very old Russian folktale about a childless couple who make a child from snow. The snow child then becomes real.

Ivey made a connection between the setting of the Russian snow child, and her home in Alaska’s Mat-Su Valley.

“Growing up I didn’t come across very many stories that could have been happening in Alaska — in my own landscape. So I think that is what really excited me about that fairy tale: This could be right here. It sort of opened up this whole new possibility for me as a fiction writer, having this magic in my stories.”

The landscape and the seasons — and the hardships of agriculture in Alaska in the early 20th Century — all play prominent roles in Ivey’s The Snow Child. The characters — especially Jack and Mabel, the older couple — are sharp and compelling. They create the snow child in love — not sorrow — and they don’t understand the mystery of her existence any more than conventional parents.

The snow child herself, though — named Faina — never really comes into focus. By the end of the story, we don’t know if we’ve been tricked, or absorbed by the intense desire of Jack and Mabel to keep her in their lives. We’d love to believe that the snow child is real, but we’re never quite sure, and Ivey isn’t telling.

“Some people are really frustrated by not having a definite answer, and I think it just depends on what kind of reader you are. For myself, I like having a little bit of openness at the end of a story, a little room to sort of imagine, and contemplate what it all means. Throughout the story I wanted to walk that line between fantasy and reality.”

Before becoming a novelist Ivey worked at Fireside Books in Palmer, Alaska. She paid attention to the winners of the various literature prizes, and consequently saw that The Snow Child was listed as a Pulitzer finalist before she received official notification.

Ivey called her mother, who thought she was joking. This was the same woman, after all, who named her “Eowyn” after a warrior princess in Tolkien’s Lord of the Rings.

“To be honest, growing up no one really recognized it. People would say, Is that Celtic? I’d say yes. Is it Welsh? I’d say yes. I’d just agree to anything. And then once the movies came out I started having young people come up to me and say, Wait! Aren’t you a character in Lord of the Rings? So it’s become a little bit more well known I think.”

Ivey’s second novel is called To the Bright Edge of the World, and is also set in Alaska, but about 40 years earlier than The Snow Child — around 1885.

Note: Eowyn Ivey will read from both her novel at the Sitka Public Library beginning at 6 p.m. Tuesday, May 23.