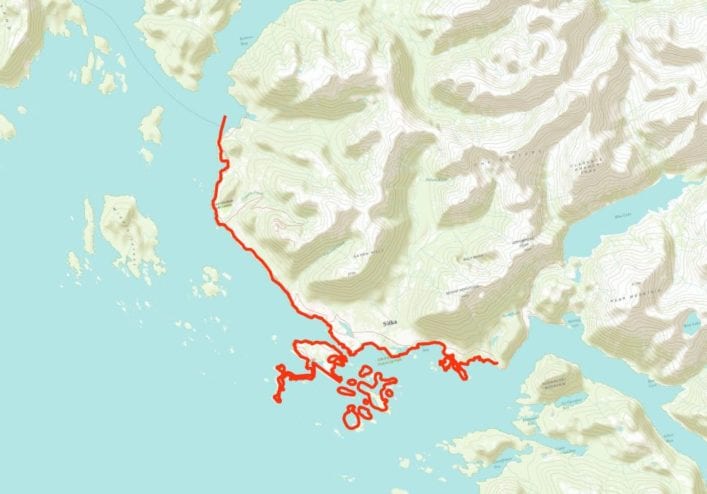 The red line denotes the scope of Sitka’s Community Risk MAP Study, which began in 2013 in partnership with FEMA and the state. The revised maps incorporate new LiDAR data. (Image Alaska DCRA)

Sitka has been involved with the National Flood Insurance Program since 1981. That qualifies homeowners for flood insurance, at the discretion of their lender, so long as the city maps out which areas are prone to flooding.  With the appeal period for Sitka’s new maps now closed, both the city and a handful of citizens are contesting newly drawn flood lines.

Over the past five years, FEMA and the state have been updating the Flood Insurance Maps, or FIRMs, along Indian River, Swan Lake, and 32 miles of city-owned coastline. The draft maps – published in January – incorporate LiDAR data collected in 2014. Some buildings that were once in the flood zone are no longer, while others are located in places now considered hazardous.

Property owners and lessees were given 90-days to dispute the boundaries of the newly-drawn flood zone. View the preliminary FIRM maps here.

On May 23, building inspector Chris Duguay told the Sitka Assembly why taking part in the National Flood Insurance Program is still a good idea for Sitka. Homeowners can access loans for development from the U.S. Department of Housing and Urban Development, the U.S. Environmental Protection Association, and the U.S. Small Business Administration, as well as federal disaster assistance to repair flood damage.

But the maps need some tweaking. Duguay said the city is trying to lower flood lines along Katlian Street and near Swan Lake. They’ve supplied FEMA with information about an outflow culvert there. “It looks like we can possibly get some headway there, in terms of adjusting where a number of other properties have been impacted in that zone — particularly east of Swan Lake,” Duguay said.

The city wasn’t as successful, he added, in convincing FEMA to change flood lines along Alice Loop. The new maps raise the base flood elevation – which represents where there’s a 1% annual risk of flooding –  by a foot and a half.

Half a dozen Sitkans have also appealed, including Ceri Malein and Matt Donohoe. Their house on Galinkin Island is built above the 15-foot flood zone, but then they got it refinanced in 2013, FEMA said otherwise.

“They went with the topography maps rather than the actual visual maps – the photo maps – so they insisted that our house is in the ocean, when it was actually on a rock,” Malein said. “So I had to a hire a surveyor to get a Certificate of Elevation (CoE) and that proved we were on a rock and out of the flood zone.”

That certificate qualified them for a Letter of Map Amendment, or a LOMA. They thought they were in the clear. But that all changed with this latest version of the map, which places them back in the flood zone despite the Certificate of Elevation.

Donohoe is outraged – not just about appealing for as second time, but about the ramifications for Sitka’s tax base. “When you could get put in a flood zone, your property is devalued. Who knows how much?”

They’re not the only ones frustrated by the city’s continued participation in the program.

The Hames Corporation discovered that a corner of the Searmart was in the flood zone a few years ago. Their private insurance did not meet federal requirements and they went through the appeal process too.

In an e-mail to KCAW, CFO/COO Max Rule described FEMA’s determination of flood zones as “highly detrimental to future development.” He added, “Flood insurance can be prohibitively expensive in many cases that prevents reasonable growth and development in these coastal areas.  It should be a concern of  everyone.”

As for Malein, she doubts a flood will happen the way FEMA predicts. “Why do people here in Sitka have to pay FEMA flood insurance when everyone knows we’re not going to flood? And if we did get the tsunami – the big one, the scary one – it’s going to [hit] a lot more than the properties that are just in the flood zone,” she said.

The deadline to appeal officially ends May 27th. After all appeals are submitted, FEMA will process the comments and hold a risk map workshop in the Spring of 2018. At that point, the Assembly will decide whether or not to adopt the flood maps and continue taking part in the National Flood Insurance Program.