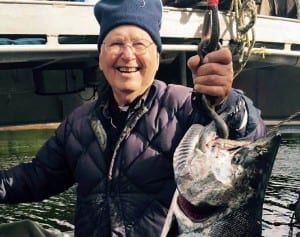 Thursday’s (5-25-17) announcement from the Alaska Department of Fish & Game closing all spring troll fisheries will not affect the upcoming Sitka Salmon Derby.

The derby will proceed with a two-king per day resident bag limit, one fish less than last year.

Troy Tydingco is the area management biologist for sportfish. He says the department was aware of the low preseason forecasts for chinook, and responded early.

“We took some conservative management (measures) really early on, through some of the closures on the inland rivers and the fisheries on the inside waters.”

That meant shutting down places like the Situk to all fishing for chinook, including sport and subsistence, and closing areas near the mouth of the Stikine to sportfishing, and reducing the bag limit region-wide.

Thursday’s announcement that commercial trolling for king salmon would end this spring on May 29 was supported by information that returns to the Taku and Stikine rivers were at historic lows. Typically, at least half of the kings that enter those rivers are already about there by now. The kings landed in the Sitka Salmon Derby are produced in hatcheries, in the big rivers of Washington and Oregon, and in Canada.

“We’re not catching a high proportion of those inside wild stocks.”

So shutting down, or otherwise cutting back on the Sitka derby would not improve fish conservation on the Stikine or the Taku rivers.

Derby competitors land around 100 fish a day, depending on the bag limit. Last year sport anglers had a three-fish per day limit, which pushed the derby total to 795 kings. All were sold on the commercial market to support the Sitka Sportsmen’s Association and pay prizes. With the two-fish bag limit, this year’s total catch could be down somewhat.

Last year’s winner was Bob Bernhardt, with a 42.5-pound king.

The Sitka Salmon Derby takes place this Saturday through Monday, May 27-29, and then the following Saturday and Sunday, June 3-4.