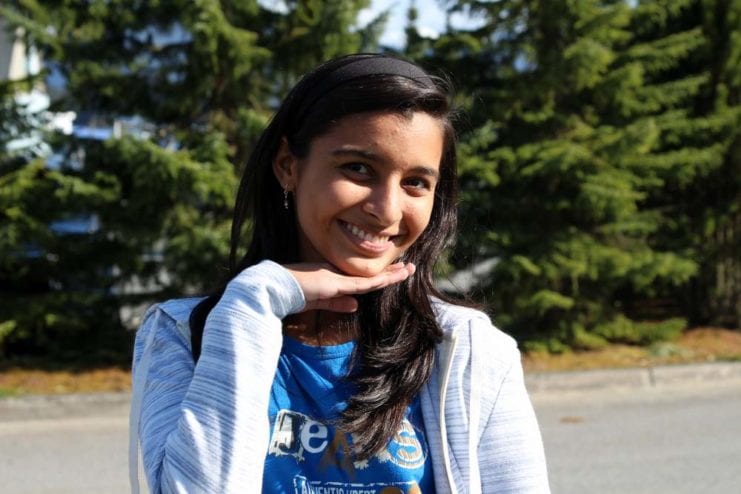 The following commentary was written by an exchange student, as part of a personal essay project between Raven Radio and the Sitka chapter of AFS. Namrita is one of four students from a Muslim-majority country studying and living in Sitka this year.

Hello, my name is Namrita Kumari and I am from Hyderabad, in a country called Pakistan. Today I am here to clear up some misconceptions about Pakistan.

Let’s start with an international media. If there’s a terrorist attack in Europe or in USA that becomes news highlight. But media doesn’t report on the real situation in South Asia or the Middle East. We Pakistanis suffer most of the time for being called “terrorists” and the funny thing is that we are also the ones who witness these blasts and attacks too.

There have been many blasts in Pakistan by terrorists. Many families have been scattered by these terrible incidents and lost their loved ones. It feels so bad when you hear people saying they have lost their brother, aunt, or someone else.

I remember one of the blasts took away children from their parents. It was in school and killed more than 140 students between 8 and 18 years of age. Children are tomorrow’s nation. Those who did this probably don’t have any feeling in them. The thing I am most afraid of in Pakistan is not that I live in an Islamic country or that I have Muslim friends, but those bomb blasts and attacks that can happen anytime. That scares me. No one knows when their next target is, and where.

When parents send their children to school in Pakistan, they pray for them to come home safely and alive. We don’t have freedom to live. We are afraid when any of our siblings goes out and comes home late. We are afraid when our father doesn’t pick up the phone. We are afraid to go to public places, like parks and shopping malls. Is this what you call a LIFE? If that is it, then YES we live this life. But, instead of supporting the suffering ones, the world blames Pakistanis and calls them terrorists?

Pakistan is a country situated in South Asia with a population of 200 million. It’s an Islamic country. That doesn’t make it a terrorist country. That’s common sense. No religion in the whole world teaches violence or hurting others.

Quran teaches brotherhood and peace among each other,  not violence. Every sacred book says to do right things. For me, those who don’t practice what’s written in their books are not part of that religion. ISIS is not Islam. Terrorism has no religion.

I’m not a Muslim. I am Hindu, but I have Muslim friends and I am proud of that. One of friends is Aamna. We are in same class, we eat lunch together, and play together. Her parents have never said, “Don’t be friends with the girl from another religion.” My parents have never said, “She is a Muslim, so don’t be friend with her.” Really, it doesn’t feels good when people judge you. What if there was a terrorist who killed many people and he reads the bible? Should I say that because he is a Christians, that all Christians would be terrorists too? Please don’t judge people.

If there’s a person who’s doing something wrong, I am not gonna ask him or her, “What’s your religion? Are you Muslim, Hindu, or Christian?” And I’m not going to think, “Oh, he or she belongs to this religion, so this means all people of that community are the same.” We all know that even brothers and sisters are not same. How can different people of any religion be the same?

Religions were made for identification, not for discrimination or violence. We all are humans and we all want peace. Pakistan Zindabad. Thank you for listening.