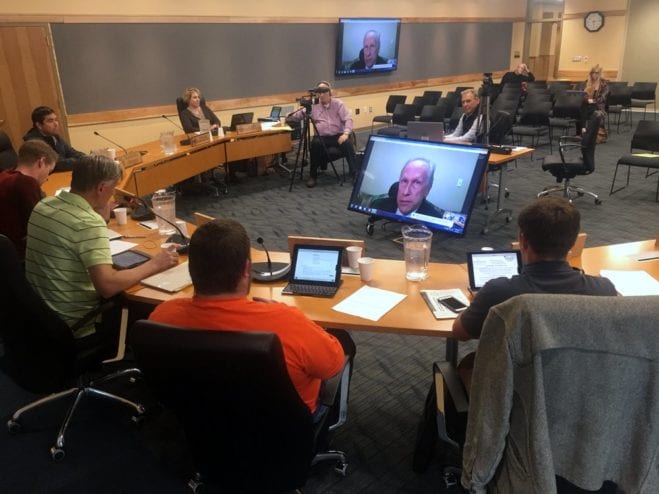 Interim administrator candidate Phillip Messina interviewed via Skype from the offices of Prothman, in Issaquah, Washington. In addition to 28 years working in city government, Messina has also worked for Prothman as a recruiter. Mayor Matt Hunter called it “the perfect recipe” for guiding Sitka toward a permanent hire. (KCAW photo/Robert Woolsey)

The Sitka assembly has finally found someone they’d like to hire to run the municipal government. Unfortunately, he’s a temp.

The assembly met in special session Thursday night to interview Philip Messina, a candidate for interim city administrator, and decided to make him an offer on the spot.

Some might be tempted to say that it was the neat blue suit, the well-groomed thinning silver hair, or his uncanny resemblance to current Sitka administrator Mark Gorman.

More likely, though, Philip Messina took control of the interview from an assembly with a bit of hiring fatigue, and made it almost impossible for them not to offer him the job.

See what you think.

This would be an opportunity keep a steady hand more or less on the tiller and get ready for transition to your next manager. I’ve done a little bit of reading about your agenda, a little bit about the hospital and the consolidation, went through your budget and see where you do have some issues over future revenue. You have a really interesting and aggressive capital plan — it could be a challenge to finance all those projects, but those are the kinds of things that I like to see happen. And again I know you’ve had some issues over the last couple of weeks and the last month that have probably rocked the community a little bit, which is tragic. And again the purpose of an interim is to come in and make sure that the projects that you’ve approved and financed are going to get done. So that would be another part of it: making sure that those projects that you want to see done, that you’ve just approved, that we get those rolling. And again, to get ready for the next manager and get through that process.

In case you weren’t keeping track, in 90 seconds Messina explained that he wouldn’t make any big changes during his interim work, he’s up to speed on the major political issues in the community, he’s concerned about Sitka’s possibly over-ambitious capital plan, he’s sensitive that we’ve recently experienced tragedy, but he believes that it’s important to keep moving and deliver government projects and services.

The assembly has rejected over 50 candidates for a variety of reasons. They’ve wanted someone who’s overseen large budgets and complicated governments — Messina said he’s run cities with everything Sitka has, except a harbor department and a local electric utility. The assembly has wanted someone who won’t bolt — Messina managed Central Point Oregon for 10 years, and he believes in grooming future leadership from within an organization.

They’re also looking for someone with small-town sensibilities. Messina lives about 20 miles outside of Seattle in a town of under 8,000 people called Duvall.

And they wanted someone okay with Sitka’s weather.

“I grew up in Seattle, I’m used to rain. So it wouldn’t be a huge problem.”

Messina’s name was forwarded as an interim candidate by The Prothman Company, which the assembly has hired to recruit a permanent administrator. They also had letters of interest from two veterans of city government: Former administrator Gary Paxton, and former police chief Sheldon Schmitt.

Both assembly members Steven Eisenbeisz and Aaron Swanson expressed a preference for Paxton, though Eisenbeisz said he’d support the hire of Messina if that’s the way the others went.

And Messina is where member Kevin Knox wanted to go.

“I was pretty impressed with the amount of information he had about what he would be stepping into. It was more than some of the other candidates we’ve talked with, beyond our locals. He didn’t just look at the headlines, he’s dug in a little bit for something that he’s only going to do for three months.”

Mayor Matt Hunter also liked Paxton, but ranked him second behind Messina. Hunter felt that Sitka could be getting a manager and a management consultant in one hire.

“He seems to have the same philosophy that I want our candidate to have here. Keep a steady hand on the tiller, don’t change things drastically in a short amount of time. And then as others have said this expert appraisal of city operations can be extremely valuable. He immediately pointed to our infrastructure plan which was the biggest thing we have to deal with — our hundreds of millions of dollars of work in the next 50 years and how will we get there — and maybe he has ideas of things we can take out of that plan or fund differently, or completely different approaches. I’m excited about that.”

Member Bob Potrzuski made the motion to nominate Phillip Messina as interim administrator, and to have the Human Resources Department negotiate terms.

If he accepts, Messina told the assembly that he was available to start work right away.

Current city administrator Mark Gorman is expected to leave the post on June 15.