One-tenth of a pound makes a winner in Sitka derby 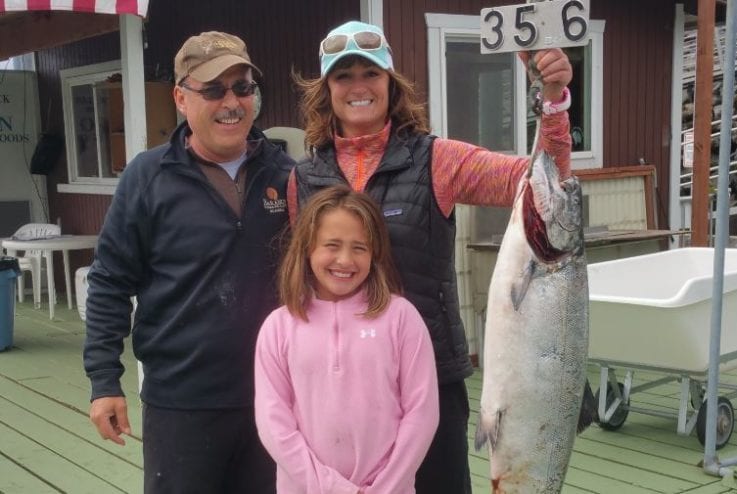 Derby leader Paige Bernhardt with her husband Gary and daughter Riley. Bernhardt holds a one-tenth of a pound lead over Scotty Golden. Riley is on the leader board with 3rd place in total poundage. (Marsha McCrehin photo)

In what may be the tightest finish in the event’s 61-year history, Paige Bernhardt has won the Sitka Salmon Derby by one-tenth of a pound.

Bernhardt landed her 35.6-pound king on Sunday over the Memorial Day weekend, fishing in Olga Strait. The derby’s number two fish, Scotty Golden’s 35.5-pounder, also came in during the first three days of the contest. Sarah Lamb also held onto third place with a 32-pound king.

The only change in the leaderboard over the second weekend of the contest came in total poundage. Bernhardt’s nine-year old daughter Riley moved up from third place after the first weekend to capture the prize with 163.6 pounds of king salmon landed over 5 days.

Paige Bernhardt will take home $7,500 in cash for her winning king. Her daughter Riley will get a check for $1,000.

Paige says she hasn’t fished the derby since 1995. The diehards in her family are her husband, Gary, and Gary’s dad Bob, who was last year’s winner. Paige Lambert’s uncle has also won the derby, as has her sister-in-law.

She’s says she’s really more excited about seeing her daughter and husband fish together, than going out herself next year to defend her title. There’s no question, though, that nine-year old Riley is into it.

“Yes, she has been bitten by the Bernhardt fishing bug.”

Bernhardt thinks she might invest her winnings in a new outboard for her family’s boat.

Riley’s check is still to be decided.

“We’ll have to discuss that. Maybe we’ll do half-and-half. Half she can have, the other half to savings.”

Marsha Lysons tracks the statistics for the Sitka Salmon Derby. She says

King salmon landed in the derby are sold on the commercial market to support the Sitka Sportsman’s Association and cash prizes.

All results are unofficial until awards night, which will be 7 p.m. June 15 at the Gil Truitt Center on the campus of Mt. Edgecumbe High School.

Yet another Bernhardt is out in front after three days of fishing in the Sitka Salmon Derby.

Paige Bernhard leads all competitors with a 35.6 pound king. That puts her one-tenth of a pound ahead of Scotty Golden’s 35.5 pound fish, and three pounds over Sarah Lamb’s 32-pounder.

Paige Bernhardt is the mother of Riley Bernhardt, who currently is third place in total poundage, having landed six kings weighing a combined 108.7 pounds. Riley Bernhardt is trailing her uncle, Mike White, by just under a pound, and trailing the poundage leader, Scott Golden, by 24 pounds.

Derby chairman John McCrehin says that fishing was a bit slower than last year. As of noon Saturday, the opening day of the derby, no one had turned in a fish to the “Salmon Central” barge in Crescent Harbor.

McCrehin also says the fish are running a bit smaller, but that might not be a bad thing. “It definitely helps not to have a big fish brought in on the first weekend,” he says.

This is also the closest derby in his memory. When Paige Bernhardt brought in the leading king, McCrehin says it was a close call. “I had to let the scale settle out completely,” he says. He believes Bernhardt’s one-tenth of a pound lead may be unprecedented.

Grand prize in the 2017 Sitka Salmon Derby is $7,500 cash for the biggest fish. The total poundage winner will claim $1,000. And as in past years there are hidden weight prizes and door prizes totaling over $5,000.

The final two days of the derby are Saturday June 3 and Sunday June 4.