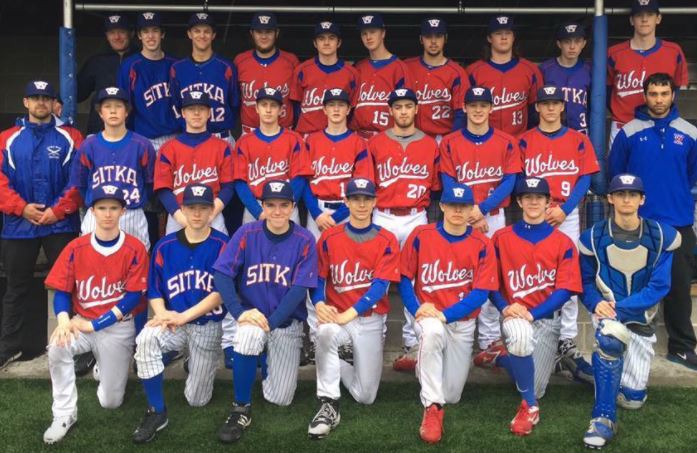 After two seasons of rebuilding following their at-home championship in 2014, the Sitka Wolves Baseball team took home the state title for the fifth time in the last dozen years.

The Sitka High Wolves are the state baseball champions — again.

The Wolves edged out the Anchorage South High Wolverines 2-1 on Saturday (6-3-17) to capture their second state title in four years.

It was sweet revenge for Sitka, who lost to South in the second round last year, and had to settle for third.

Not so this year. Camden Suarez pitched all nine innings for Sitka, giving up 7 hits and just the one earned run, which came in the first inning.

Head coach Matt Way says that Suarez throws a variety of pitches, as compared to his other two starters, Vaughan Blankenship and Eric Coonradt, who are mostly fastballers. He thought Suarez would give Sitka the edge over South’s big fastball hitters.

“We picked Camden to take that game, if we got there. And we ended up getting to the championship, Camden used those offspeed pitches about sixty-percent of the time. He did a really good job keeping their hitters off-balance.”

Suarez shut out the Wolverines for the next eight innings, throwing a total of 101 pitches, which Way calls “unbelievable.”

On offense, Sitka’s Bryce Kelly went 3 for 4 at the plate. Dayton Cropper, Morgan Simic, Emmitt Anderson, and Gavin Flores also picked up hits for the Wolves. But it was two key walks — plus heads up gameplay that turned into critical runs for Sitka.

Stockel was the first batter in the top of the 4th inning, and walked on six pitches. He made third on a combination of a hit, bunt, and a fielder’s choice, that put Caleb Suarez on first.

Then, using a play taught to them by Ky’s dad, former minor league player Dan Stockel, the Wolves stole home.

“We had Caleb do a delayed steal, anticipating that the catcher would just throw down to second for an easy out. On the throw we had Ky Stockel, who was ready run at third as soon as he threw it. Ky took off and was able to score easily.”

In the 9th, Oliver Moore-Baker walked, advanced to second on a walk by Caleb Suarez, moved to third on a single by Bryce Kelly, and was sent home on a sacrifice fly by Stockel.

This is a different style of baseball than the Wolves played in 2014, when they won their last championship at home in Sitka, with power hitters across the lineup.

“With smaller, faster runners we can base hit, we can slap hit, we can bunt, steal, hit-and-run — those types of plays which make for an exciting baseball game are in play when you have faster guys.”

And the Wolves will also lose Oliver Moore-Baker, who only came into his own as a varsity player his senior year at right field — but what a year he had.

“Olli had a lot of big innings for us, he also reached base. He was 8 for 8 in regionals. He was a wrecking ball on the field.”

Way says he’s got younger talent coming up, and the competition will be tight for some positions. “We’ve got guys looking to play more baseball and get themselves ready to win a spot on a state championship team.”

Sitka is the winningest team in Alaska High School baseball in recent years, with five state titles in the last 13 years.

In fact, Wolves Baseball is second only to the Lady Wolves Softball team, who has won six times over the same period.