A solo ‘cruise’ around North America stops in Sitka 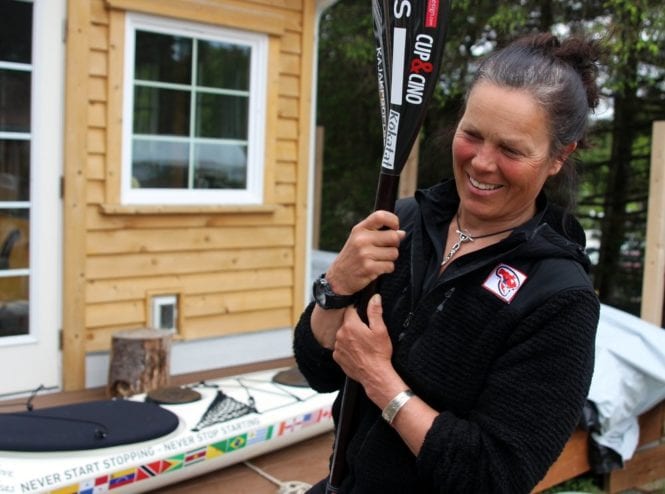 Freya Hoffmeister takes a couple of days to recharge at the home of her Sitka host, Stan Barge. “It’s not just fun to go paddling and lie on the beach in the sun. It’s quite disciplined work,” she says. (KCAW photo/Robert Woolsey)

An endurance kayaker who has circumnavigated the continents of Australia and South America is now on her way around North America.

Freya Hoffmeister stopped in Sitka to resupply, roughly 70 days after leaving Seattle this spring. She spoke with KCAW’s Robert Woolsey about the sacrifices and rewards of what may be the world’s loneliest sport.

Anyone in Yakutat willing to host Freya Hoffmeister for a couple of nights can connect with her via email. You can find her address at freyahoffmeister.com.

Two months into a kayak trip that could take up to 10 years, Freya Hoffmeister is looking for a hairdresser.

She’s not having much luck. It’s a Monday, and the only shops open downtown cater to cruise traffic.

Hoffmeister does her best to blend in.

“I will tell everyone who’s asking me where I’m from, I’m just from my cruise ship.” 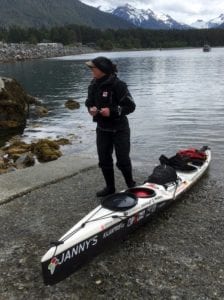 Hoffmeister comes ashore in Sitka. Not just any kayak will do. She has five of these Chinese-built custom hulls — three in the US, and two back in Germany — which she’ll use on her circumnavigation. (KCAW photo/Chris Todd)

Hoffmeister’s boat is a sleek, black-and-white, custom-built fiberglass kayak. It’s one of five in her fleet. She’s shipped three of them here to the US, and she has two in reserve back in her home of Husum, Germany, just north of Hamburg. She plans to paddle the one she’s in now as far as Homer or Kodiak this summer, then return to Seattle next spring and begin paddling south. After three months of that, she’ll fly up to Kodiak or Homer and resume her trip northward in summer 2018. Repeat yearly, until she arrives in New York.

That’s how you paddle around a continent.

“You can eat an elephant, you just have to cut it into reasonable pieces.”

Hoffmeister wants a hairdresser to touch up a few streaks of gray. She’s 53 now, a former gymnast, bodybuilder, and skydiver. Kayaking has been her obsession for 21 years, since the birth of her son. It started in the sheltered waters of the Baltic, paddling with her boy in the rear hatch until he turned six. Then came a three-week trip along the coast of Newfoundland.

Then, for Freya, there came Iceland, and there was no looking back.

Circling South America took Hoffmeister four years, 2011 to 2015. The following year, she paddled around Ireland. Because she can. 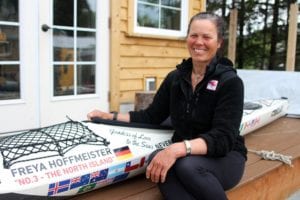 Mixing with the cruise ship crowd in Sitka provides a kind of relief for Hoffmeister. Sometimes, it’s easiest not to talk about what she’s doing. “It’s just the whole dimension of the thing,” she says. “I’m not always telling everybody when they’re asking, What are you up to? Where are you paddling? I’ll say ‘Just around the island.'” North America, her third continental circumnavigation, she calls “The North Island.” (KCAW photo/Robert Woolsey)

“I like to be exclusive. I like to be doing something that not everyone can do. Sure, everyone can go paddling, but not in this dimension, and not in these unknown areas. Most areas of the world have been paddled. There’s barely a white spot on the map — on the coastlines — which have not been paddled. Even the Northwest Passage has been paddled. But everything together is simply not possible for most people.”

Hoffmeister’s kayak is plastered with the logos of her sponsors, but she also puts up much of the money for these trips herself. She owns a pair of Janny’s ice cream cafes in Husum, one of which converts into a Christmas store every October. She has a staff of 40 employees. She also has help managing her kayaking website and corporate sponsorship, and her speaking tours.

Hoffmeister pretty much has it all, except steady companionship. What started out as a kayaking “blind date” in Seattle with another paddler ended in Sitka, when Hoffmeister and the guy decided to go their separate ways.

She uses satellite telephone equipment to update her Facebook page every day, even with the candid details of a date gone bad.

“Sometimes two people make two problems, but it’s definitely nice to share, not only with a paddling partner — I’m sharing it usually online updating my website and blog, but this is a one-way communication. Now, it’s time to look into two-way communications.”

Hoffmeister says that she has had many excellent paddling partners, and working on her social skills over a long trip helps keep her brain from “rusting.”

It’s just that most people don’t understand the true effort — physical and logistical — required to mount trips of this scale.

KCAW – Since you’ve described this as your job, is it ridiculous to ask you: Are you having fun?
Hoffmeister – Oh sure I’m having fun, or I wouldn’t be here. There are also days which are quite boring. Just to paddle along yawning, with your eyes closed, and you’re happy when the day is over and you’ve arrived at the spot where you want to go. Then you take a day off and it’s good again.

Hoffmeister likes to reprovision with as much fresh food as she can, especially an apple a day…

“…which keeps the doctor away.”

And she packs for 3 to 4 weeks at a time, which will put her next in Yakutat, she hopes, where she’s still looking for a bed and a warm shower, and a hairdresser.