In Sitka: A mobile plant built to chill out the Bristol Bay fishery 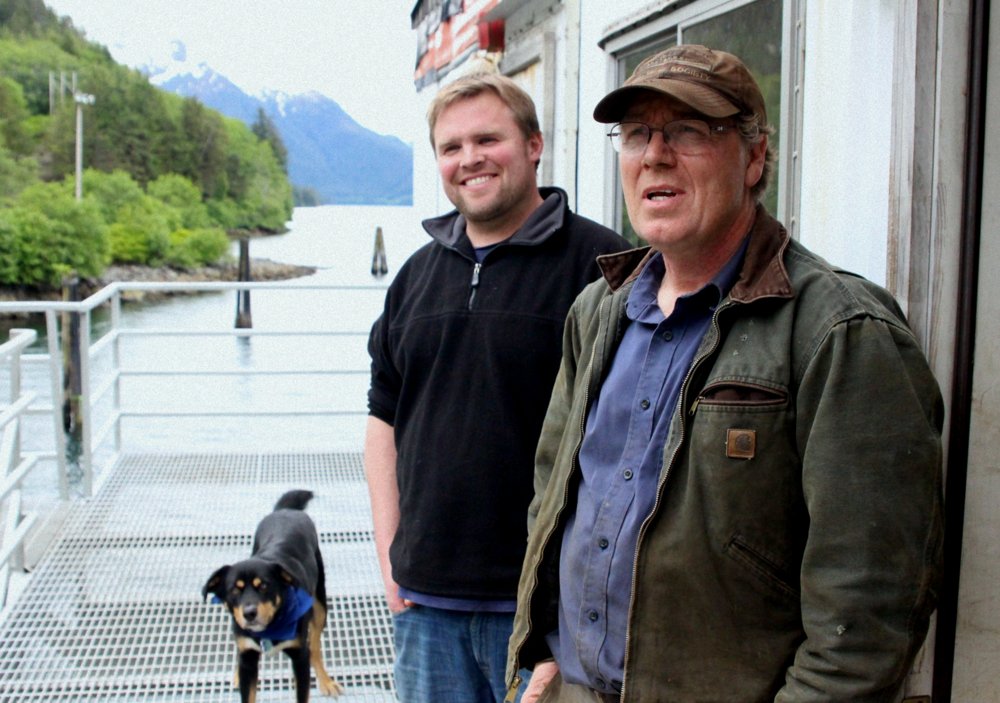 Pat Glaab (r.), Ben Blakey, and Roger aboard their processor at Sitka’s Gary Paxton Industrial Park. Their staking around $2 million on the idea that fish buyers will pay a premium for Bristol Bay sockeye that’s been chilled down immediately after harvest. (KCAW photo/Robert Woolsey)

Alaska’s Bristol Bay sockeye fishery is intense, lucrative — and also remote. Much of the fish landed there is frozen whole and shipped long distances for secondary processing.

Although the product is famous, there are some who think the quality could be improved. In Sitka, a pair of entrepreneurs is betting $2 million that they can deliver a better Bristol Bay sockeye. Meet Northline Seafoods.

Fast and the Furious: “All right team, listen up. The game has changed now…”

Forget The Fast and the Furious. Vin Diesel is strolling through the park compared to the Bristol Bay sockeye fishery, which explodes into action in early summer.

All right. That’s a bit of an exaggeration. But the relentless pace of sockeye fishing can’t be overstated: two openings a day, four hours between openings, with harvests topping 13 million pounds a day during the peak of the season in June.

12 processors buy fish in Bristol Bay. And next year there will be a thirteenth: Northline.

“They’ll go under the deck. There’ll be three more of these ice machines here…” 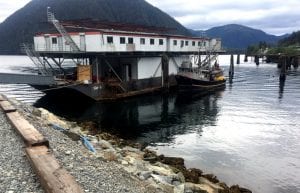 Formerly a heli-logging operation from Dall Island, the Northline barge gets a retrofit in Sitka. The topmost structure — once a helipad — will be used for net storage. (KCAW photo/Robert Woolsey)

This is Pat Glaab, who with his partner, Ben Blakey, has bought a 150-foot former helicopter logging barge and is converting it into a floating fish processor.

When it’s done this facility will be able to freeze up to 300,000 pounds of whole sockeye a day — while tied to the banks of the Ugashik River, about 85 miles south of Naknek, where the nearest processors are located.

But right now these guys are over 800 miles away from Bristol Bay, in a makeshift office aboard the barge moored at Sitka’s industrial park.

Not many people get out this way, according to Blakey’s dog Roger. Any other year, both Blakey and Glaab would be fishing in Bristol Bay now, instead of building a seafood plant. Blakey has leased out his boat for the summer.

Blakey — I spent pretty much every summer in Bristol Bay since I was a kid — that’s actually where I met Pat.
Glaab — We were fishing partners, when we both started fishing in the bay many years ago. He being in college at the time. Me being just after Leader Creek, building a plant there, getting a little bit into the fishing end of things. So we partnered for a few years, and we’ve kept close since. 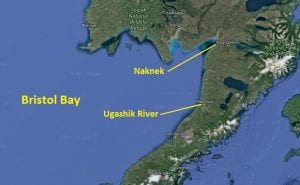 The distances in Bristol Bay can make a difference in fish quality. Last year, Glaab says, a lot of seining took place in the southern part of the bay, a 2-day run from Naknek.

Their idea is simple: ice, where it’s needed. The length of time a Bristol Bay sockeye spends in the hold of a gillnetter or seiner until it’s delivered to a tender or processor is highly variable. The distances between the river systems in the bay are huge. Some fishing boats are equipped to refrigerate seawater to cool down their catch; most are not.

Blakey and Glaab want to close that gap.

“There’s a real need in the bay for chilled fish. There’s nobody in the world who wouldn’t say that there isn’t a portion of that fleet that hasn’t the ability to take care of this fish properly. We feel this thing will fill that need.”

Fill that need, and perhaps more. Pat Glaab is a self-taught engineer, and one of Alaska’s most prolific seafood plant builders. He met Blakey after he built the Leader Creek plant. He also built the Silver Bay Seafoods plant in Naknek — and its plant across the harbor here in Sitka. This barge is actually his 11th processor.

And Blakey thinks the completely self-contained, floating plant may be one of Glaab’s best ideas. Technically a tender, this barge will operate with around 20 people, as opposed to the 200 or so needed to run a processor on shore.

“There are a lot of communities in Alaska that can’t support a full-time cannery or a processor with that many people, because they don’t have enough volume. If an outfit like this can get by with less overhead, lower labor costs, they might be able to park it in front of an isolated area and process the fish at a more effective cost.” 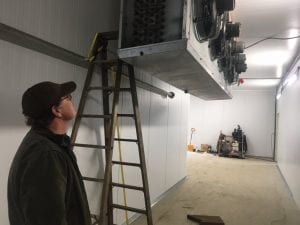 Much of the main deck is being converted to freezer space, per Glaab’s design. Another barge, with refrigerated containers, will be moored alongside the processing barge in Ugashik to store the catch for later shipping. (KCAW photo/Robert Woolsey)

The barge has four levels. Topmost is the former helipad, which will be used for net storage. Below that are the offices and crew quarters. On deck, Glaab’s crew is installing evaporators for the huge freezers, and there is a large area with cranes for offloading fish. Below decks is a massive compressor — one of three planned — and holding tanks for fish and frozen slush.

Glaab will test the barge’s processing capability right here later this summer on pink salmon — around 90,000 pounds a day. In the fall, he’ll haul out the barge on a ramp that the industrial park has authorized him to build on his leased land, and prep the hull for its voyage to Bristol Bay next spring.

The labor on the barge will be devoted to sorting the fish by quality — and that’s where Glaab hopes to find a premium price.

“We’re going to dump ‘em out, take a good look at them. Even pull three fish out. And check them, to see if they test out. And if they don’t test out, we’ll cull them aside. And it’s not a punishment to the fisherman: It’s feedback for our fishermen, and not punishing the market, who will get those randomly if I just dump them in, as they’re doing now.” 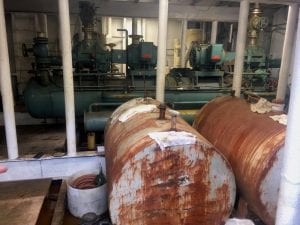 Below decks Glaab has installed one of three planned compressors. He hopes to test his idea by processing around 90,000 pounds a day of pink salmon later this summer. (KCAW photo/Robert Woolsey)

This is what Glaab thinks will be the game-changer for Bristol Bay: accurate grading, more high-quality fish, a longer-lasting product, and community-oriented employment in some of the more remote corners of the region.

It’s a forward-thinking vision for this old logging barge, which is slowly becoming a high-tech processing platform. Glaab builds with the future in mind. He introduces me to his son-in-law, and I look around and notice that except for Glaab, there’s no one over thirty at work on this project.

“I often ended up with 15 or 20 people in their twenties who were just coming into the work world in their lives, looking for a career instead of a way to keep their hands busy. And looking for a place that more than just showing up to a job, make some money, and go away and have no commitment. And I’ve very much enjoyed that interaction: to live with people whose lives are expanding.” 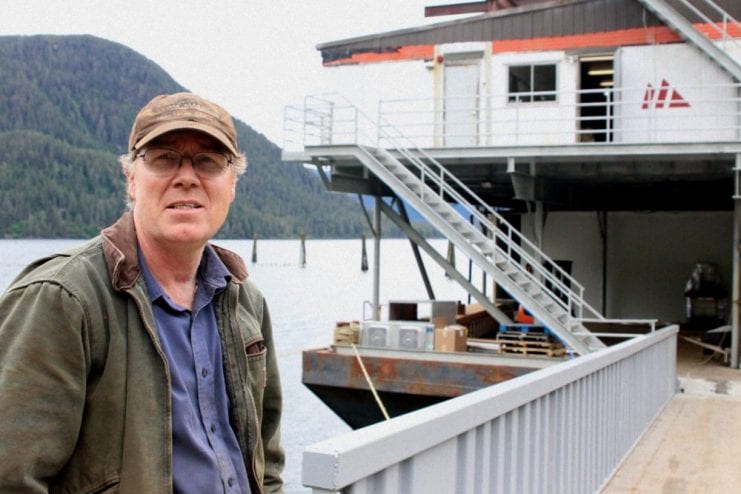 With eleven seafood plants to his credit, Glaab is far from being a fringe player in the Alaska seafood industry. But a social consciousness underlies his work: The people — mostly young — he recruits have an exceptional opportunity to thrive in a business that has become expensive to enter. “Having young people be able to move into a place — not where they get these things for free, but they’ve earned them — that, to my mind is a comfortable place to live.” (KCAW photo/Robert Woolsey)

And expanding is what Glaab hopes for. If this pilot project is successful, he and Blakey plan to build at least three more processing barges — brand new from scratch — in Sitka’s industrial park. Each will cost around $5 million, and the pace of work? Fast and furious.

The Fast and the Furious — “No one’s ready for this…” 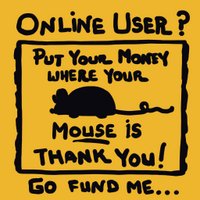