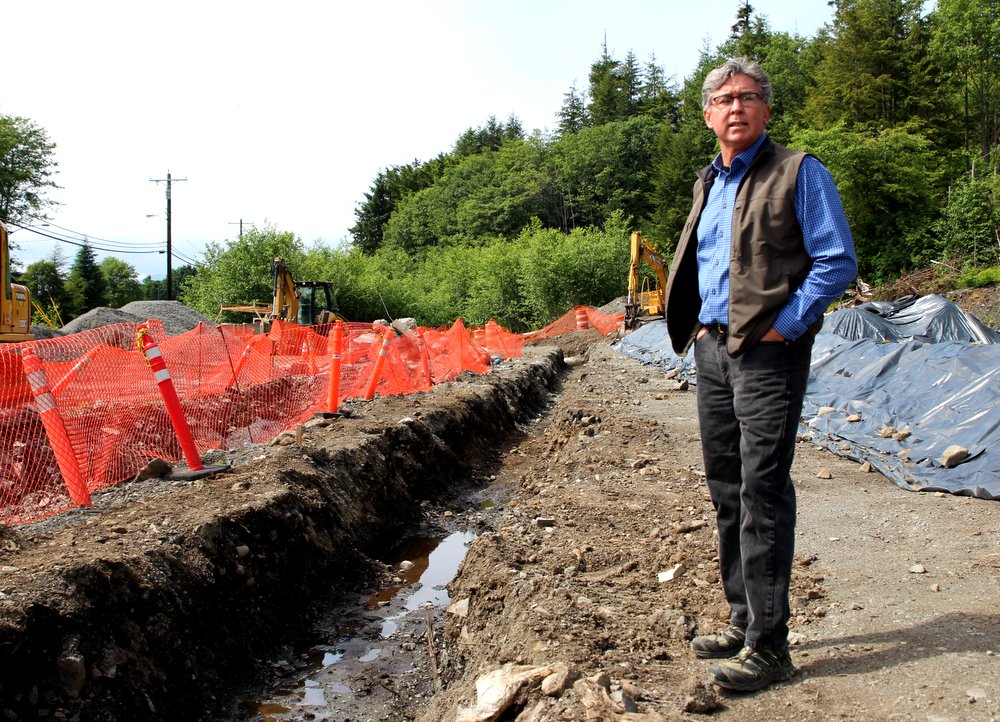 Land trust chair Randy Hughey inspects the oily sheen in a trench at the site of the Halibut Point Cottages. He hopes to find a way to mitigate the contamination without passing on the costs to future buyers “who weren’t even born when this happened.” One additional precaution: Contractors will install ventilation fans in the crawl spaces below each cottage. (KCAW photo/Robert Woolsey)

Development has begun in Sitka of the community’s first affordable cottage neighborhood, and the project is on-time and on-budget — almost.

Randy Hughey chairs the board of the Sitka Community Land Trust, which is developing the neighborhood. He told the Sitka Chamber of Commerce at its meeting this week (6-29-17) that the project has hit a bureaucratic snarl that may take some time, money, and cooperation from local government to untangle.

Listen to Randy Hughey’s full address to the Sitka Chamber of Commerce. Learn more about applying for a Sitka Community Land Trust home.

The site of the Halibut Point Cottages — as they’ll be known — is referred to as the “Old City Shops” by most long-time Sitkans. But it wasn’t only the city which had a facility there. The state Department of Transportation’s maintenance building was on the location, until it was knocked down by a landslide in 2005.

The original structures on the site, according to Hughey, were built by the federal government during the military buildup during World War II.

Nevertheless, the city and state took up responsibility for the cleanup after the landslide. Hughey read from a report by the Department of Environmental Conservation. 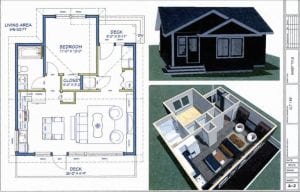 In the musical Oklahoma! Ado Annie asks her finance about a prospective home: “Big enough fur two but not fur three?” The Halibut Point Cottages are designed to allow buyers a toehold in the market. As a family grows, it will have to look to the open market to scale up. “These homes are cozy,” said Hughey. The floor plans are by local architect Ben Kraft of  Northwind.

“In 2006-7 is when they completed the remediation and the DEC filed a report saying ‘No further remediation action is required and the property is cleared for redevelopment.’ Two weeks ago, in putting in a sewer line, we discovered contaminated soil. A week ago, in putting in the water line, we discovered more contaminated soil.”

Hughey told the chamber that the contaminated soil — around 100 cubic yards — is likely the “very same stuff they remediated in ‘06-07,” and most likely contained petroleum of some kind.
Despite the optimistic report, Hughey says residual contamination was a known risk when the Sitka Community Land Trust received the site from the city. In fact, Hughey says, the site came with the understanding that the city was waiving any further responsibility for contamination. Oops — there’s one snag right there.

To pack up this soil and ship it off to a hazardous waste facility in the lower 48 would cost about $60,000. Wrapping it in an impermeable fabric — a so-called “burrito” — and burying it under a parking lot would be much less — but still a large, unbudgeted expense. Hughey emphasized that this wasn’t a legal issue. The SCLT has invested a half-million dollars of Rasmuson grant funding in developing the site — and many a lawsuit has been filed over less. Hughey is focused on an entirely different goal: Not passing on the costs of this problem to future owners.

“So we could add it onto the cost of those houses, but if we do that we’re asking seven young families to bear the economic brunt of pollution that was happening before they were born, and for decades, and that we — community wide — are responsible for, because it was our city which in past years did that, right?”

Hughey says the SCLT has been keeping the city in the loop on the matter, and that all parties are looking for a fair solution — which might involve peeling off a small parcel to sell to the adjacent vet clinic, and possibly selling other parts of the site — on the hillside, for instance — which could not be developed as economically as the rest of the mostly-flat cottage area.
In the meantime, the Halibut Point Cottages will lose at least two weeks of prime summer building weather while Hughey waits for soil tests to confirm that the contamination contains nothing unexpected. 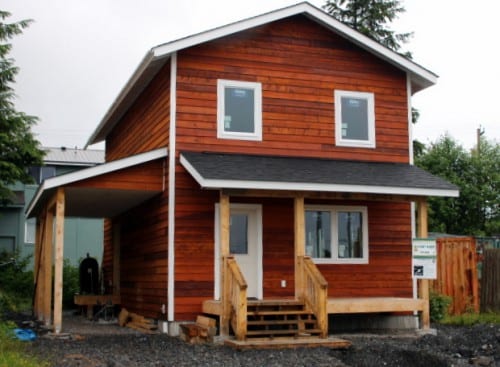 Failure or expensive lesson? Cost overruns pushed the price of this home on Lillian Drive — the SCLT’s first project –above $300,000. Ultimately, the Trust gave up the house, and a sale is now pending with a deed restriction limiting the price to $30,000 below market value in perpetuity. Hughey doesn’t rule out buying it back someday and returning it to the Trust’s inventory. Until then, “I never hope to see another change order for the rest of my life!,” Hughey said. (KCAW photo, Robert Woolsey)

But it wasn’t all bad news. Hughey said that the SCLT has architectural designs for the first seven of thirteen planned cottages, and relatively firm numbers from contractors for their costs. Buyers can expect to pay between $150,000 and $210,000 for a one-, two-, or three-bedroom cottage. The smallest will be about 650 square feet; the largest about 1,000 square feet.

The mortgage costs will run from $1,200 a month and up. This isn’t cheap — but it is affordable, Hughey says.

“Our pricing targets are what are people going to be paying for rent? If we can provide a one-, two-, or three- bedroom home at or below rental value, then we consider that a win.”

And because it’s a land trust, buyers own only the structure. The land remains in the trust. And when it’s time to sell, buyers will recover their down payments, all payments that they’ve put toward paying down the principal on their loans, and 25-percent of any increase in value of the cottage.

And there’s one final criteria: Neighborliness. Sitka hasn’t seen a cottage neighborhood before, where the lots are small — about 4,000 square feet — parking is off to the side, and residents walk to their homes.

“It’s way down on the list on the application,” Hughey said, “But you’ve got to demonstrate that you can live with people.”