Oprah’s short visit to Sitka and lasting impact on fans

Media mogul Oprah Winfrey set foot in Sitka today. She was ferried here on a Holland America cruise ship, with additional stops in Juneau and Ketchikan. On board were hundreds of loyal fans seeking adventure, inspiration, and if they were lucky – a chance to chat with the queen of daytime television.

Rumors that Oprah Winfrey was coming to Sitka have been floating around for weeks. News reports from Juneau confirmed her arrival, as did her Instagram account. In a video uploaded on Monday, she sings, “Getting ready to hike the Mt. Roberts Trail, here in Alaska!”

Oprah declared 2017 her “Year of Adventure” and launched a series of cruises – one to Alaska, where she had never been before. On her itinerary for Sitka was a visit to Fortress of the Bear, the Alaska Raptor Center, and watching the New Archangel Dancers at Harrigan Centennial Hall.

Many of her cruise ship passengers were hoping to catch a glimpse. Classie Hoyle is a former alderwoman from Annapolis, Maryland and she’s been watching Oprah’s career ascend for decades. Hoyle said, “She’s certainly a role model and I’m — what, 20 years older than she?”

The 7-day cruise departed Seattle on Saturday (7-15-17) and was organized by O, the Oprah Magazine. Activities take inspiration straight from from the magazine’s pages. There are yoga classes, an onboard book club, motivational talks, and gifts – every night. “Not a car,” Hoyle jokes, referring to a 2004 episode of the Oprah Winfrey Show where every audience member got a Pontiac G6.

The swag on the cruise is more modest: a visor, a pen, and a journal specifically for this trip. Oprah is big on reflection, and on her faith. She was raised a Baptist and after years of physical and sexual abuse, ran away from home when she was 13.

Even now, as one of the wealthiest people in the world, Hoyle said Oprah told a cruise ship audience that she still gets on her knees every night to pray. “Regardless of how much she goes out and parties, that is something she always does – which was shocking to me. You wouldn’t think a billionaire…but she says, every night she prays.”

Outside Harrigan, there’s still no sign of Oprah. Bus after bus of her fans arrive, sporting gear with a giant “O” logo. Part of the appeal of Oprah is that she’s built a massive empire around the personal growth. People are inspired by her because she inspires them directly.

“I’m getting from this trip, that I will take with me, is I felt Oprah for the first time in the last 25 years,” said Coco Hunt. “You can read her. You can see her. But being in her presence, her essence, really flowed in the room. Everyone was captivated. You could hear a pin drop.” 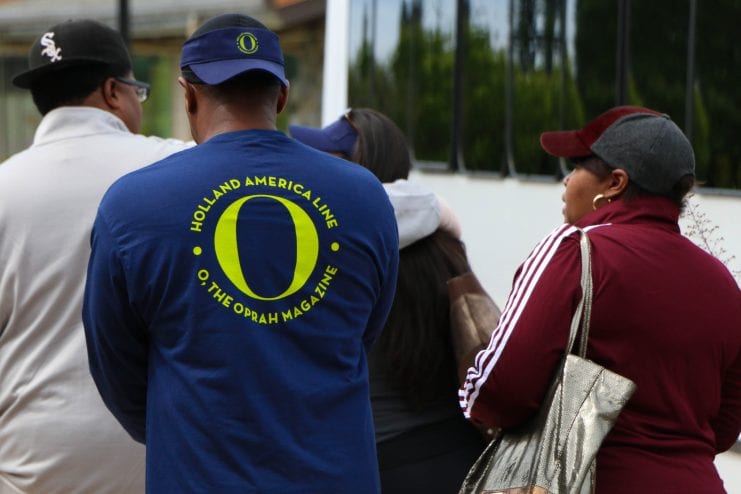 Holland America Line has partnered with O, The Oprah Magazine in offering four “Adventure of Your Life” cruises in 2018 that travel through Alaska and the Caribbean. (Cameron Clark/KCAW photo)

Hunt is from San Diego, California. Her grandfather used to ask her, “What are you hunting for?” to which she replied, “I’m hunting to see what else I can do to leave a footprint on this earth.”

Suddenly grabbing my hand, she tells me that I have a purpose too.

KCAW: What are you? Are you a teacher?

Hunt: No, I’m just a person! That’s holding your hand. You’re the one that’s special.

It isn’t Oprah, but getting motivation from a true disciple of hers is the next best thing.

I walk away beaming and find a gaggle of young fans – Haley Silva, Faith Holst, Kayden Plummer – who have received the disappointing news that Oprah left town. “Maybe she’s eating something?” Holst asks. “Maybe she got a corn dog!” says Plummer. Silva wanted her autograph.

Several tour guides confirm that Oprah cancelled all her plans and around 2:50 p.m. went straight to her private jet from the ship, overwhelmed by all the attention she’d been receiving aboard. Ultimately, Oprah came and went without a trace. But what she does share of herself tends to linger long after she leaves.