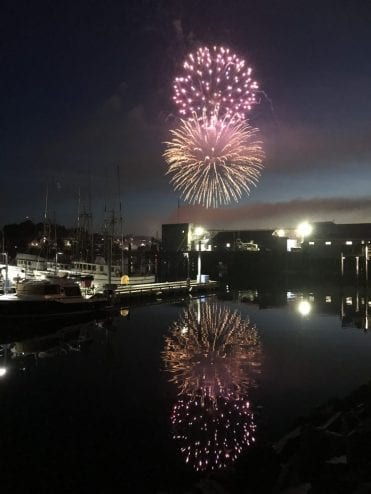 Fireworks near ANB Harbor on the Fourth of July. (KCAW photo/Rachel Cassandra)

There were fireworks at the Sitka Assembly table last night (07-25-17), as the group debated whether to make fireworks legal around New Year’s Eve and the Fourth of July.

Several Sitkans spoke against the measure, saying that making explosives legal would only invite further nighttime activity. Many wanted an outright ban, 365 days a year, like Lorraine Lil. “My two dogs and everybody else I talk to says its just horrible. Every night this week, I’ve been woken by fireworks. Once you give people the opportunity to have fireworks 2-3 days a year, then they’re going to think it’s a free-for-all like they already do.

Kathleen McCrossin also urged a ban, saying the Police Department doesn’t have the manpower to watch for fireworks 24/7. “The game looks like this. Set off the fireworks. Clean up the mess. Go inside. Wait a half and hour or more until the police that may have been called on that violation go away…set off more fireworks. So just when we get a little bit of calm, it starts again,” McCrossin told the Sitka Assembly.

There are two Sitka Police officers on duty at any given time and the department is short staffed. Police Chief Jeff Ankerfelt said he wants the force to take a solutions-based approach, speaking to offenders before they bring match to wick. “We’re not just talking about little bottle rockets. There’s some heavy artillery being fired off around this town.” He says the department will investigate when they tips from citizens. “It’s okay for us to knock on a door and say, ‘I understand you were firing off fireworks.’ They can deny that. And we’ll say, ‘I appreciate that but you’ve got a big burn mark on your driveway and if I get a call back again, I’m going to investigate further.'”

After hearing their testimony, the Assembly decided to uphold the city’s stance that fireworks are illegal for use and sale. They voted on an ordinance to strengthen enforcement of the law (Ord 2017-27), with a penalty system that started with $50 for the first offense and after the third, a mandatory court appearance.

In the end, the majority voted it down, 4-2. Assembly members Steven Eisenbeisz and Bob Potrzuski were absent.  In voting with the no majority, Assembly member Tristan Guevin then asked for the measure to be considered at their next meeting on July 8th.

The Assembly is also looking to reschedule a town hall on the future of healthcare in Sitka, expanding what was meant to be one evening of public testimony to two.

Mayor Matthew Hunter said the town hall meetings will likely be August 30th and August 31st. They would be two-hours long and led by a facilitator.  Depending on how many people show up, there may be small groups working to come up with some kind of consensus and go through that consensus building process,” Hunter said.

The Assembly also learned that the pedestrian foot bridge over Indian River was nearly complete. Sitka National Historical Park is hosting a ribbon cutting ceremony at 10 a.m. on Friday (07-28-17), in keeping with the park’s plans to open the bridge before the late summer pink salmon run.

For two years, Alaska Permanent Capital Management has managed the city’s Permanent Fund and more recently, the reserve operating fund. The Investment Committee recommended expanding their role to include investment decisions. The Assembly approved additional guidelines for that in Sitka General Code on first reading.

Ffinally, City Clerk Sara Peterson reminded everyone that the filing period to run for the Sitka Assembly and the Sitka School Board on Friday, August 4th at 5 p.m. There are two open seats up for re-election on the school board and three on the Sitka Assembly, belonging to Steven Eisenbeisz, Tristan Guevin, and Aaron Swanson. Swanson was appointed after Matthew Hunter was elected mayor.