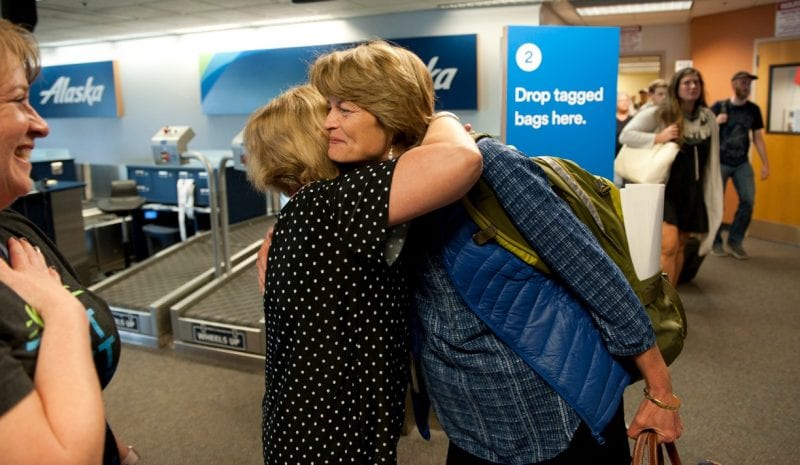 Less than 24 hours after casting a critical vote on healthcare, Senator Lisa Murkowski was back in her home state of Alaska. She had choice words about voting her conscience, despite pressure from the GOP and President Donald Trump himself.

She had planned a fishing trip in Sitka a month ago. But before chasing salmon, she met with city staff, tribal officials, and leaders from the local business and non-profit sector of Sitka. Murkowski also toured SEARHC’s Mt. Edgecumbe Hospital, where she’s sponsoring a bill to convey 19 acres of federal land to expand the facility.

Constituents there reminded her how a hastily packaged repeal bill would have affected them, confirming her decision to break party rank and buck pressure from colleagues.

“What I heard repeatedly was, ‘I’m worried. It seems like it’s moving so fast and no one really know how it is going to impact me. Can you slow it down?”

Before casting their votes, she said she visited with Arizona Senator John McCain on the floor. “He said, ‘Lisa, do what you know is right. Sometimes around here, it’s just hard to do the things that are right because politics just gets in the way.’ And it reminded me of the old [Alaska Senator] Ted Stevens phrase. He would say, ‘To hell with politics. Just do what’s right for Alaska.'”

In her first extensive interview since the health care vote, Senator Lisa Murkowski said that Secretary Ryan Zinke wouldn’t go into detail about the call. The Alaska Dispatch News reported that he called both her and Senator Dan Sullivan on Wednesday, following a Tweet from President Trump that she “let Republicans and our country down.”

Of that call, Murkowski said Zinke was acting as a messenger for President Donald Trump — who later pressured her with a personal phone call.

“That was a hard phone call,” Murkowski said. “I don’t disagree with the President of the work that we need to do with the ACA [Affordable Care Act.] We have to reform the ACA because we agree that the status quo isn’t acceptable. Where the President and I disagree is with the process, and whether or not the Senate was ready to go to the floor. I didn’t believe that we had a product that had sufficient votes.”

Late Thursday evening, Murkowski – along with McCain and Senator Susan Collins of Maine – voted against the Republican majority and bringing their effort to repeal-and-reform to a screeching halt.