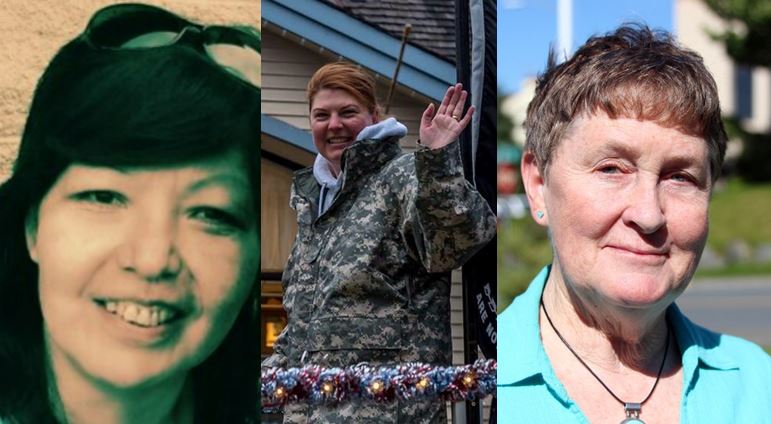 L to R: Sonya Smith, Jaime Ackley, and Sheila Finkenbinder are all running for the Sitka Assembly this fall. Elections on Tuesday, October 3rd.

As names on the ballot, Sheila Finkenbinder, Sonya Smith, and Jaime Ackley have a wide array of life experiences – in business, health care, and veterans affairs – and share in common a desire to serve. Also running is incumbent Steven Eisenbeisz, surgeon Richard Wein, and retired Veteran Ben Miyasato.

Finkenbinder thinks it’s time for the town’s demographics to be reflected in its politics. “Female voices on the Assembly are needed at this time. We haven’t had any females at this time,” she said.

Not since Mim McConnell stepped away as Mayor in 2016. Finkenbinder is no stranger to politics. She’s a former aide to Representative Peggy Wilson and ran against state House Representative Jonathan Kreiss-Tomkins last year. She’s the former director of Sitka’s Chamber of Commerce and is proud of aiding small business development through her organization, Sitka Works.

If elected, Finkenbinder wants focus on economic development. “We need revenue in town and you can never tax your way into prosperity. You have to increase the tax base,” she said.

Now retired, Finkenbinder feels compelled to serve the community and said, “I’d be happy to do this. I think it will be fun. I think a good attitude going into this job is going to be more effective than if I really had some issue and bias that I was unhappy about. I don’t. I just want to help the city be an effectively run city. I’ll try to do that with a positive attitude.”

Sonya Smith has lived in Sitka for nearly a decade. She works at Youth Advocates of Sitka, providing mental health support to young people.

Smith is growing concerned about Sitka’s high cost of living. There’s a family of five that recently moved from her neighborhood. “It was either pay the rent, or pay the electricity, which I think is a very unfair equation. And that’s no way to keep people here,” Smith said.

Smith has questions about Sitka’s school enrollment, shellfish safety at Starrigavan Beach since an April oil spill, and opposes any potential merger of the two hospitals. She addedthat her voice, as an Alaskan Native woman, is needed on the Assembly.

“There’s a lot of people that are holding me to this. I don’t think it should be all upper class or just the poor. I think there needs to be some stabilization there and not so polarized,” Smith said.

Jaime Ackley moved to Sitka two years ago, retired from the U.S. army as a disabled Veteran. After working briefly at SEARHC, she took over management of Sitka Car Rental and works for Sitka Tribe of Alaska.

Her interest in running from the Sitka Assembly stems from a desire to keep Sitka affordable, so people who want to live here aren’t pushed out. Ackley herself contemplated leaving Sitka six months ago, but changed her mind. “We moved here to retire. I want my son to graduate here. But I need to be able to afford to stay here,” she said.

Ackley called on the phone, on her way to coach football. She also wants the Assembly to put more energy into supporting the economy and keeping money in Sitka. “There’s so many people that love it here, but on a daily basis are struggling to stay here. Financially, to stay here, should not be what pushes people out,” Ackley said.

The election is Tuesday, October 3rd.