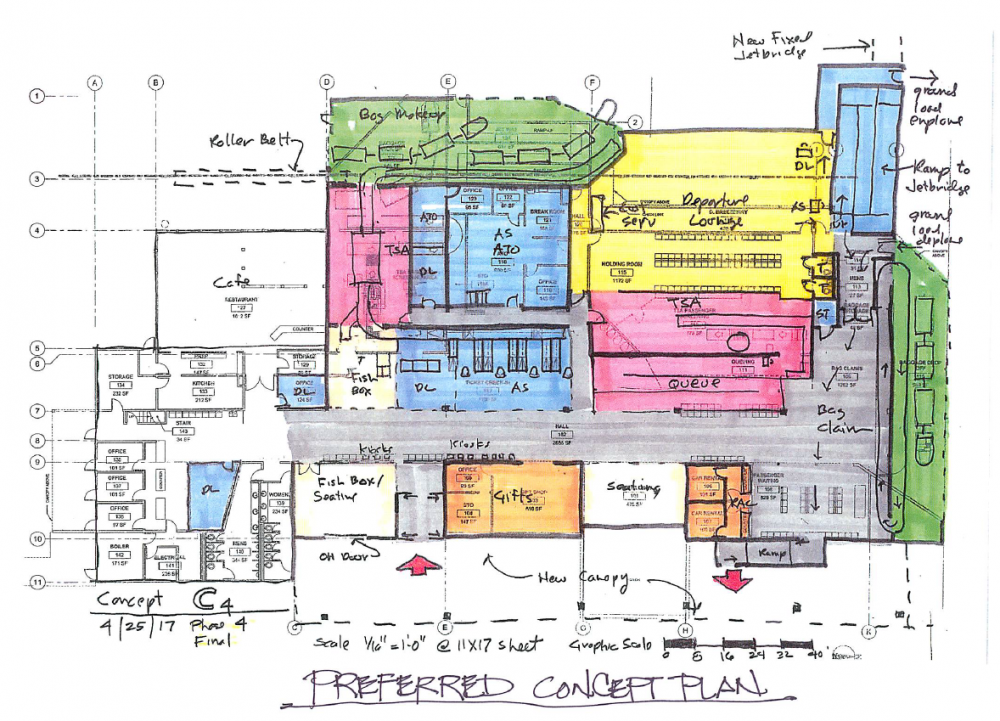 The city included a concept plan for Sitka’s airport terminal in the Assembly packet. The plan seeks to expand the baggage screening area for the TSA, as well as improve traffic flow throughout the terminal. (Concept Plan courtesy of City of Sitka)

The terminal at Sitka’s Rocky Gutierrez Airport may get an $11 million dollar makeover over the next three years.

The city, in consultation with AvAirPros, presented its plan to the Sitka Assembly at a work session last night (08-08-17). The remodel they’ve penciled out expands the baggage check-in area, screening areas, and departure lounge to separate arrivals and departures. The remodel also reverses the direction of the baggage claim belt and provides a staging area for fish boxes.

One of the city’s major goals is to reduce foot traffic in the concourse and speed up the travel process for passengers and airlines alike. Currently, TSA has put forward $3 million dollars for renovating the baggage screening area. But the money for the rest will largely come from passenger facility charges. PFCs amount to $4.50 for every enplaned passenger to Sikta.

On first reading, the Assembly approved dedicating $280,000 from previously collected PFCs towards the design-stage of the project. That took of the form of a budget adjustment ordinance (Ord 2017-29S)

To pay for the bulk of construction, the city wants to eventually issue a state revenue bond. They plan pay down debt service over a 20-year period using future PFC funds. Public Works Director Michael Harmon felt that issuing state bonds was the best solution if Sitka wants a renovated airport in the near future. “When you’re looking at a 20-year project and such little funds to work with, this is our one bite out of the apple possibly for a very long period of time.” Such a funding strategy requires Assembly authorization.

If the Assembly approves the airport renovation in January 2018, construction would take place during the winter seasons through 2020.