Alaska shuts down all sport, commercial king fishing in Southeast 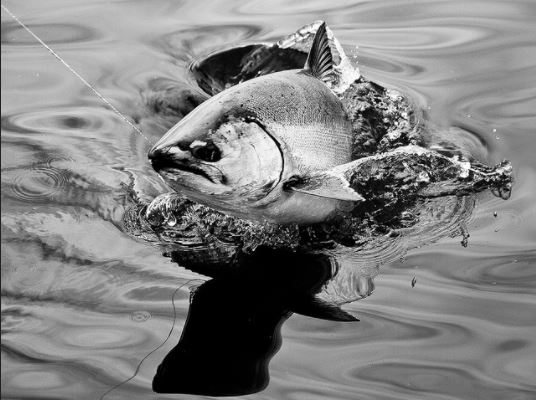 This season both the commercial and sport sectors have experienced localized closures to protect king salmon. But this is the first time all fisheries have been shut down regionwide at the same time. (Flickr photo/Marshal Hedin)

The Alaska Department of Fish & Game is shutting down all commercial and sport fishing for king salmon in Southeast Alaska.

The dual emergency order is unprecedented in recent memory. As of 12:01 a.m. this Thursday (8-10-17) all commercial fishing boats, guided charter boats, and resident recreational fishermen must release any king salmon unharmed.

The order will be reevaluated at the end of September, when the Department could either extend it, or lift it.

Commercial trollers wrapped up their first summer opener in only four days in July, landing 66,000 kings. That left 31,000 kings to be caught in a second opener, which usually happens sometime in August.

However, poor ocean survival and record-low returns to home river systems are causing managers great concern over the health of this year’s chinook run. They’re looking past this year, to the future of the fishery.

This is Deputy commissioner of ADF&G Charlie Swanton. He says many of the kings in the ocean at present are younger, and will spawn next year and later.

“Since a large number of kings that we get in the second opener are feeder kings, we felt compelled to do as much as we could to look toward the future in terms of those stocks. Ocean conditions don’t look all that promising in 2018, and we want to do whatever we can to turn around and try to not replicate 2017 moving into 2018 and beyond.”

The sport closure comes as the summer charter season remains in full swing. Although many areas of Southeast were closed to king retention earlier in the summer, a region-wide closure is rare. Again, poor production in Alaska rivers is to blame, and Swanton wants to make sure there’s a sport harvest next year.

“And it is all directed at doing whatever we possibly can to preserve those kings that we anticipate are going to be in short supply in 2018.”

Both the commercial and sport fisheries for king salmon are carefully regulated under an agreement with Canada called the Pacific Salmon Treaty. In addition to locally-produced fish, large numbers of kings caught by Alaskan fishermen in the summer openers originate outside of state waters. So the treaty, plus Alaska’s commitment to sustainable salmon fisheries policy, are the primary management directives driving the closure. “It is imperative that Alaska offer relief now for these stocks,” says deputy commissioner Swanton, “with a focus on protecting future production.”