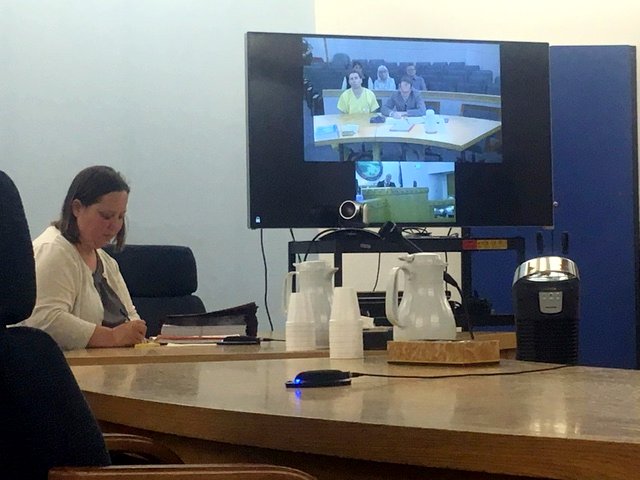 A Sitka man accused of murder will ask the court to move his trial to another town.

39-year old Reuben Yerkes, a former clerk in Sitka’s Legal Department, is accused of shooting and killing his 28-year old girlfriend, Ali Clayton, in an argument in her home in the early hours of Saturday, May 6.

Yerkes turned himself into Sitka police later the same morning.

In an omnibus hearing on Thursday (8-10-17) in Sitka Superior Court, public defender Jude Pate advised Judge David George that he planned to file a motion to change venue. Judge George gave him until September 29 to do so.

Pate also asked the judge to schedule a bail hearing. Since his arrest, Yerkes has been held first in Sitka’s jail, and then was subsequently moved to the Lemon Creek Correctional Center in Juneau. His bail was set at $500,000.

Pate asked the court to schedule up to an hour to review the monetary posting, and to make an argument for third-party custodianship.

Judge George also questioned Pate on other possible defense motions. In particular, whether he planned to file any motions over issues regarding Yerkes’ “competency, sanity, or diminished capacity.”

George ordered the state to provide the defense with the complete results of its investigation by September 15. The defense has asked for access to the autopsy report, all physical evidence from the crime scene, a ballistics study, and the contents of computers, iPads, and phones owned by both the victim and the defendant.

Amanda Browning, representing the state, agreed. She also supported the idea of allowing at least 12 days for the trial, which is scheduled for January, 2018.
Yerkes appeared in court via teleconference from Juneau. As with all prior hearings in the case, the Sitka courtroom was crowded with friends and supporters of Clayton and her parents.