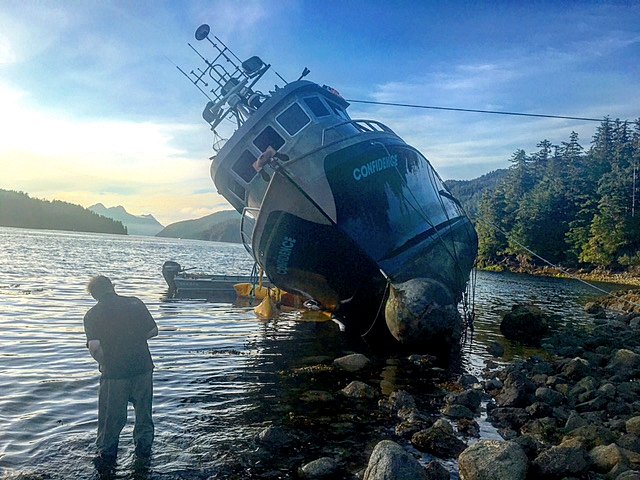 The seiner Confidence is high and dry on Highwater Island in Neva Strait Sunday, August 6. The 70,000-pound cargo of pink salmon spoiled, and were disposed of in federal waters offshore. (KCAW photo/Maxwell K. Johnson)

A seiner lost an estimated 70,000 pounds of pink salmon when his boat ran aground near Sitka last week (Sunday, August 6).

Although none of the fish were contaminated by fuel, the load had spoiled by the time the vessel was refloated.

The Confidence was returning to Sitka via Neva Strait at about 1:30 in the morning of Sunday, August 6, when it ran aground near Zeal Point, 15 miles north of Sitka.

The Confidence listed as the tide went out from under it. Subsequent tides flooded the engine room, filling the boat with a mixture of seawater and oil.

Bob Mattson is the state on-scene oil spill coordinator for Southeast Alaska. He says the 500 gallons of fuel on board presented a difficult challenge for salvage.

“The main wrinkle in this grounding was the fish. Anytime you’ve got a cargo of fish, and the possibility of fish mixing with fuel released from the tanks in the fuel system — that’s what you want to avoid.”

The Confidence was refloated on a 10-foot tide Monday night, but it was still taking on water.

In order to stabilize the vessel, the tender Aleutian Lady was sent from Silver Bay Seafoods to pump out the fish at about 9 a.m. Wednesday morning.

Although the Coast Guard determined that no fuel had contaminated the fish, the refrigerated seawater system used to chill the hold had stopped working when the Confidence lost power. The entire cargo was beyond saving

Officials had to coordinate with the Environmental Protection Agency to find a location to dump the fish.

“All the parties worked with the US EPA to secure a permit for ocean dumping, which means they can go offshore to an area designated by the EPA, and they proceed on a trackline, at a certain speed, and systematically offload the fish out in the Gulf.”

The Confidence was towed back to Sitka and hauled out at Halibut Point Marine for repairs.

The 48-foot fiberglass seiner is a well-known boat around Sitka. It’s been active in both the herring and pink salmon fisheries under three owners in the area for over 25 years. The Confidence is currently registered to Patrick Clifton, of Sitka.