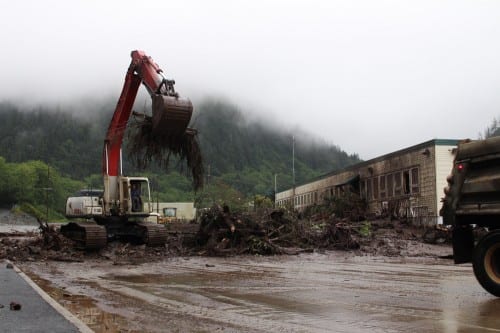 A look back: An August 18, 2015, landslide crossed Blue Lake Road, and struck the former pulp mill administration building. Although today’s slide is much smaller, officials are closing the road as a precaution. (KCAW file photo)

The Forest Service has closed the Blue Lake Road in Sitka to pedestrians and vehicles while hydrologists try to determine if a small landslide in the area remains hazardous.

A city electric crew encountered the slide this morning (8-18-17) during a routine visit to the Blue Lake hydroelectric project.

Electric department engineer Erin Clay says that crews were able to remove the landslide debris and reopen the road, but additional material sluffed down the slope later in the day, prompting her to ask the Forest Service for the closure.

Although the damage so far has been minimal, Clay says that the slide occurred in a very steep section of the road, which has been totally lost in the past.

Additionally, Clay is concerned by the forecast. Sitka has received intermittent heavy rainfall over the week, with more rain expected over the weekend.

This is the only landslide reported in Sitka as a result of the week’s heavy rains. Two years ago to the day, on August 18, 2015, dozens of landslides came down in the Sitka vicinity during a massive rain event, including one lethal slide on Kramer Avenue which took the lives of the brothers, Elmer and Ulises Diaz, and Sitka’s building official, William Stortz.