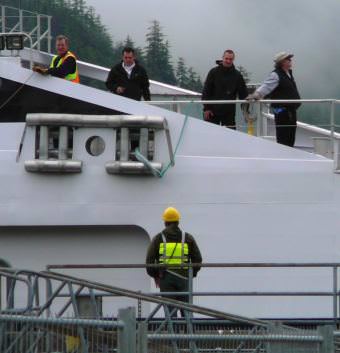 A civil suit filed in U.S. District Court alleges the ferry system miscalculates time off mandated by the Family and Medical Leave Act.

The act requires large employers to provide 12 weeks of unpaid leave when a child is born, fostered or adopted. Terms also cover care for seriously ill family members – or the employees themselves.

The conflict surrounds what are called “rotational employees.” Those are ferry staffers who work for one to three weeks straight, then take the same amount of time off.

The federal complaint, filed Aug. 16, said the ferry system counts such time off as part of the 12 weeks leave required by federal law. It said that’s illegal.

U.S. Department of Labor attorneys in Anchorage and Seattle did not return calls for comment by this report’s deadline.

Cori Mills, with Alaska’s Department of Law, said the ferry system did nothing wrong.

“The state continues to assert its long-standing interpretation of the Family (and) Medical Leave Act, and will continue to support that in the court action,” she said.

She said the state is aware of the complaint, but has not been served with an official copy.

The complaint asks the court to order the state to follow the Labor Department’s interpretation of the rules.

It asks that any fired employee be reinstated and compensated for lost wages and benefits. It also calls for any worker who lost pay or leave time to have it restored.

The suit does not say how many employees have been affected or what jobs they held.