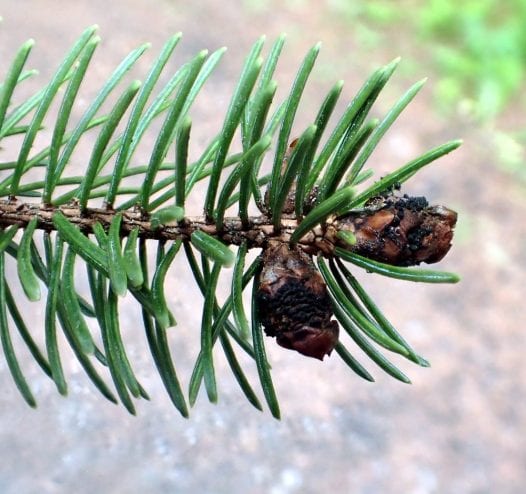 Ask any mushroom hunter: It can be tricky to correctly identify a fungus.

A fungus found by Forest Service researchers in Southeast Alaska this summer — which at first was thought to be a potentially harmful invasive called spruce bud blight — turns out to be an entirely different native species after all.

But forest pathologists are not letting down their guard: Spruce bud blight is still out there, in the forests of Southcentral and Interior Alaska. 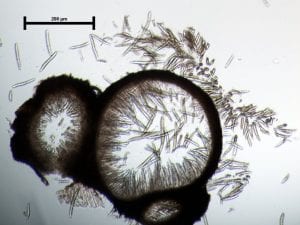 Microscopic examination of spores collected in Sitka’s Starrigavan Valley led researchers to discover the misidentification of the two fungi. This image is at 400 power in a compound microscope.  (US Forest Service)

It’s a case of mistaken identity — the kind of mistake you can only clear up with a 400-power compound microscope, and the presence of mind to call the reporters who helped spread the word about spruce bud blight in the first place.

“All of the specimens of spruce bud blight that had been collected in Southeast Alaska are actually caused by a different fungus. And that fungus is Dichomera gemmicola.”

This is Robin Mulvey, with the Alaska Forest Health Protection office in Juneau. Although Mulvey and her team were looking for spruce bud blight, Dichomera gemmicola is a nice discovery in its own right. And it’s prompted a new set of questions.

“You know we haven’t found it here before, and that may mean it’s more prevalent now, or more noticeable now. Something may have changed to make it more noticeable. Or it may just be that we found it because we were looking.”

Mulvey calls Dichomera gemmicola a “benign detection,” which she is happy about. It’s been found in the white and Englemann spruce of British Columbia since the 1960s. She says it’s likely that the fungus and spruce trees coevolved in this region, giving the trees a natural resistance and keeping the two species in balance. 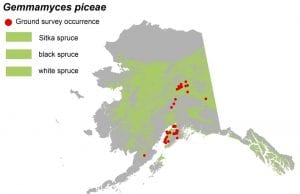 Although it hasn’t been found in Southeast, Gemmamyces is definitely in Alaska. Thanks to the genetic research of pathologist Lori Winton, the fungus has been positively identified in sites from the Kenai Peninsula to Fairbanks. The question remains, however: Is Gemmamyces native to Alaska, or a potentially forest-killing invasive? (US Forest Service)

Spruce bud blight — not so much. This fungus blackens and deforms the emerging buds of spruce trees. Gemmamyces piceae, as it’s called, has taken out entire plantations of blue spruce in Eastern Europe. And it’s in Alaska, on the Kenai Peninsula, around Anchorage, and in forests near Fairbanks. That’s why Mulvey was looking for it in Southeast this summer, and found Dichomera instead. Spruce bud blight could still turn up somewhere in Southeast.

For a forest pathologist, the incorrect identification of Gemmamyces was no setback. It’s game on.

“We’re constantly unraveling these stories — these mysteries — and trying to figure things out. I think the publicity around spruce bud blight, because we weren’t sure if it was a native or non-native causal fungus, has created some excitement about the scientific process. And I think that’s valuable.”

Valuable and, Mulvey says, a kind of test run for her team at the office of Forest Health Protection. “We found something new,” she says, “where do we go from here?”