The Fates have left the building 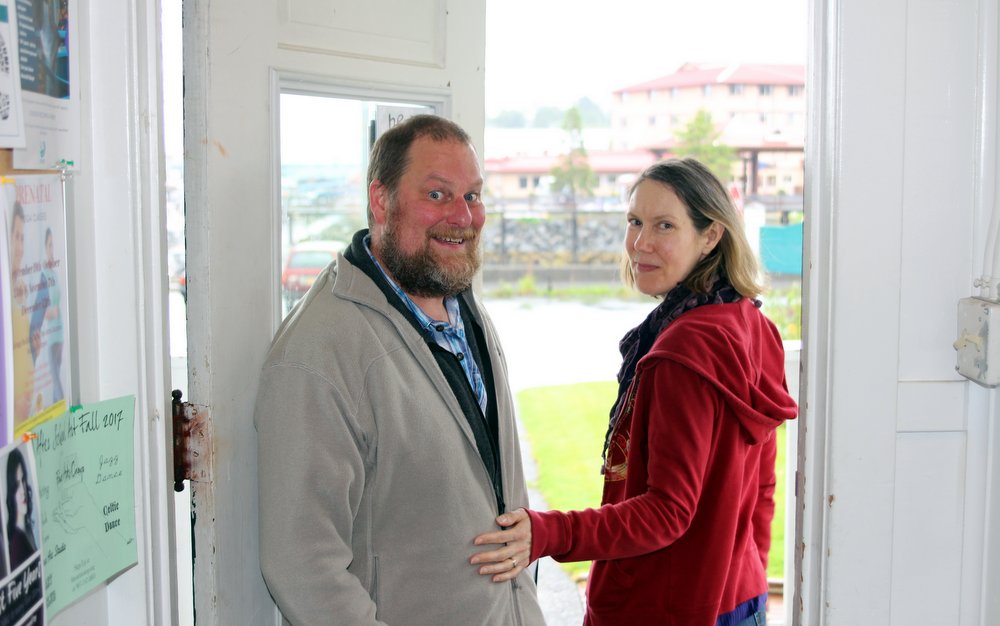 Ken and Rachel Fate depart the historic Cable House on their last day of work. The couple have been sharing the position of general manager since 2015, with Ken serving as General Manager since 2004. (Emily Kwong/KCAW photo)

KCAW’s Co-General Managers Ken and Rachel Fate held their last day on the job Thursday (08-31-17), departing the Cable House with their dog Olivia in tow.

The Fates have had a multi-decade relationship with the station, that began with Ken’s hire as Chief Announcer in 1990 and rise to General Manager in 2004. Rachel joined him as Co-General Manager in 2015 and was instrumental in launching our new online retail shop.

After discovering public radio as a college DJ at the University of Idaho, Ken became a radio apprentice to former KCAW General Manager Rich McClear. Over the years, Ken has trained hundreds of volunteers, championed fundraising to renovate the 100-year old Cable House, and transitioned the station into the digital age. Those in Sitka may also know the Fates as the illustrious, costumed hosts of fourteen Stardust Balls. The couple will stay in Sitka, with Ken working at the Legislative Information Office and Rachel devoting time to art projects.

For a relationship this storied, it’s perhaps no surprise their love was born on the radio too.

In the book of Raven Radio mythology, the proposal of Ken and Rachel Fate is the stuff of legend: it was a total surprise, live on-air, and recorded. One wintry day, a few days before Valentine’s Day 2015, Ken found the cassette tape with that 1996 recording.

“We were doing radio theater by way of playing the parts of Ducky Boy and the Poodler on “At the Hop,” he explained.

They were in 1950s character, performing short vignettes at the malt shop or on “make-out bluff.” But in this scene, Ducky Boy was going to make the relationship official by giving the Poodler his fraternity pin.

“She knew what much, but she didn’t know that I was going to break character and ask her to marry me,” Fate recalled.

Ken: I want to go steady, Poodler. Will you?

Sometime during the show, Ken changed his mind.

“I decided that I wasn’t going to [propose]. I was prepared to do it and then I chickened out. But then, she played a song. [Rachel] cued up a  Paul Anka song, “You Are My Destiny,” that I didn’t know she was going to play nor did she. She kind of just picked it as we were running around try to cue things up. And the song changed my mind. I couldn’t chicken out,” he said.

Ken: That was more beautiful than you would ever know. You are my destiny.

Ken: And my last name is Fate.

Rachel: What does Duck Boy mean?

Rachel: I love you too Ken Fate.

Ken: And the world is completely a better place because you exist in it.

Ken: And I want to be around you for a long time to come.

Rachel: Well, we do have lots of fun.

Ken: We do have lots of fun. (Rachel laughs) I would very much like to be your husband and I would like you to be my wife. And I’m wondering as I kneel here if you would marry me Rachel Pate.

Well, we’re going to go smooch on the porch so if you want to call you can but we’re not going to answer the phone.

With that, they put a needle on a record and left the building.

Former KCAW co-general managers Ken and Rachel Fate are planning an on-air party this fall, featuring archival radio from shows of the past.

Read the Sitka Sentinel’s article on the Fates’s retirement here.