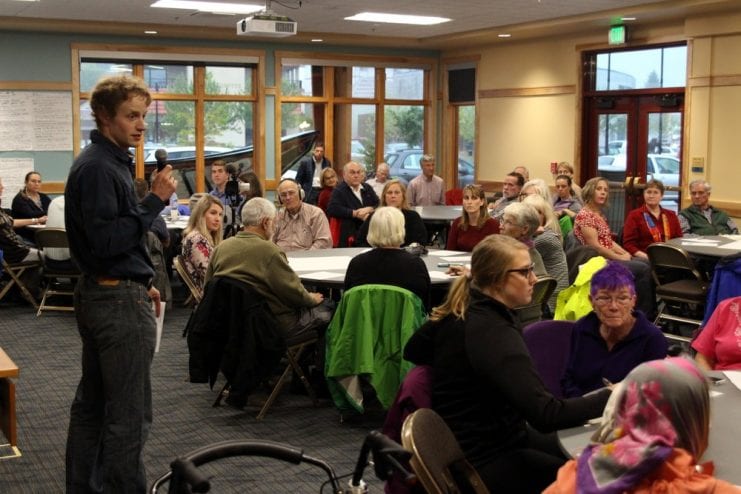 “It’s eye-opening to hear all these ideas,” said Sitka Mayor Matt Hunter as he opened the second of two town hall meetings on health care. “And see how much we agree on.” (KCAW photo/Robert Woolsey)

About 70 Sitkans gathered Thursday evening for the second of two town hall meetings on health care. Although the format was the same as Wednesday’s (8-30-17) meeting, city staff hoped a slightly different mix of people would generate more direction for Sitka’s assembly.

Facilitator Jan Caulfield — as she did the previous evening — asked the group to name 5 specific criteria to guide the assembly as it decides what shape health care in Sitka will have in the future. Then she asked them to name specific health care options.

Here are some highlights from a table led by Sitka police chief Jeff Ankerfelt.

One of the first recommendations was making sure that we have a fully-staffed and competent hospital board. Where all the requisite skills you need to run a facility are represented: accounting, business acumen, medical leadership, things like that. There’s also a kind of cool Go-Big-Or-Go-Home philosophy, and it was essentially identify new markets by doing a care needs assessment. There are a lot of needs out there that are not currently being met. So, maybe some marquee services that could be a regional draw. For example, a birthing center. Mr. Bob Sam last night (at the previous town hall meeting on this topic) made a nice comment about Why do we have babies where we have sick people? They should be taken care of in another location. I thought that was pretty cool. A psychiatric center. We’re sorely lacking in that. And the thought was that would really draw people in because it’s such an unmet market. Assisted living and elder daycare. We have an aging demographic and that’s important to have. Another thing, even though it’s been argued that it’s not economically feasible, but it’s very important in terms of quality of life here in Sitka is a 24/7 surgical team. Particularly as it relates to trauma. It was pointed out that we have a very active community, people falling off of things, people running around in boats, and people get hurt. So we want that kind of competent team here.

It wasn’t a complete consensus, but I felt the table had quite a bit of momentum behind this idea of collaborating and seeing if there could be a structure that could keep the two hospitals, but not everybody doing everything. So some examples that people gave was maybe have just on ER, one obstetrics department. Or, another idea would be have obstetrics at Sitka Community Hospital lean more toward the birth center, midwifery side, but if there was more of a medical delivery involved or surgery, that would be handled at SEARHC. There was a suggestion of having just one place with long-term care. Some discussion about how to centralize or consolidate primary care. So these are just some ideas how you could go through and say not all services necessarily need to be provided at both locations.

Although there were new faces among the 70 people who turned out Thursday evening, many were the same. And many have been visible and outspoken in their views about health care.

One that we really tried to dig into, and got a little frustrated: More outreach to the low-income population on their health care issues and their needs. One of the comments was, As I look around the room I don’t see the folks that are maybe not as well off as the rest of us. So what are their issues and what do they need?

Another demographic missing from Thursday’s town hall meeting: The young. Although one assembly member brought a teenage exchange student, the average age of the group was likely 50 or higher.

Mayor Matt Hunter — one of the youngest people present — introduced and concluded the meeting. He was instrumental in slowing down the process and inviting public input, but that doesn’t make assembly’s decision any easier as it weighs the options before it.

“I’ve read all your emails,” he told the group, and then broke into a laugh and added, “I stopped answering them in July — but I still read them!”