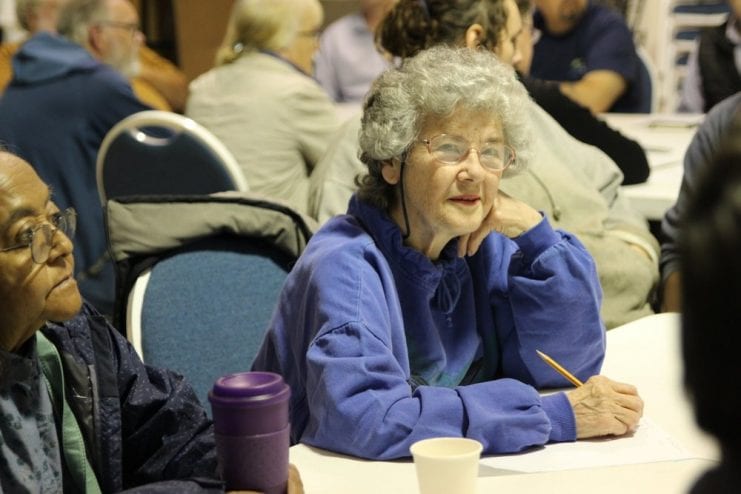 The City of Sitka is seeking public input on the future of healthcare through town hall-style meetings. The first was held at ANB Hall on Wednesday, August 30th and drew a crowd of 70 people. (Karla James/KCAW photo)

Local providers, collaboration, and quality healthcare from birth to death were the recurring themes at Wednesday night’s town hall (08-30-17) on healthcare.

The City of Sitka hosted the event at the Alaska Native Brotherhood Hall, which was facilitated by Jan Caulfield – an outside consultant from Juneau – and organized largely around small conversation.

About 70 people came, including senior management from Sitka Community Hospital. While the crowd included SEARHC medical providers, top officials were not in attendance.

At the top of the meeting, Mayor Matthew Hunter acknowledged the messiness of a process that began over 18 months ago with collaborative talks between the two hospitals and ended with a proposal for merger.

That proposal is no longer on the table, as new information has come to light about the city’s $35 million dollar pension obligation and guidance from the city attorney to open the doors to outside offers.

Hunter apologized to those who felt they weren’t heard by the Assembly so far, and deliberately sought a different format for this week’s community meetings. “A lot of the criticism I was getting was, ‘I’m only allowed to speak for three minutes.’ And this [community meeting] is a way everyone can speak at length and be heard and be a part of the process,” he said.

The five break-out groups were led by city staff, which included Interim City Administrator Phillip Messina, Community Affairs Director Maegan Bosak, Planning Director Michael Scarcelli, Fire Chief Dave Miller, and Police Chief Jeff Ankerfelt. They led a roundtable discussion on two questions: (1) What are the five most important factors for the Assembly to consider as they address health care in Sitka? and (2) What future health care opportunity or opportunities do you want the Assembly to consider and why?

Taking notes on an easel pad, city staff members then shared recurring themes and points of view to the larger group. Many Sitkans wanted formal collaboration between Sitka Community Hospital and SEARHC to reduce duplicate services, while others emphasized the benefit of competition and choice.

Several emphasized the need for comprehensive medical services to carry patients from birth to death, pondering aloud how Sitka would prepare for the “silver tsunami” as Southeast’s population ages and the future of obstetrics. Sitka Community Hospital may phase out its labor and delivery program this fall. 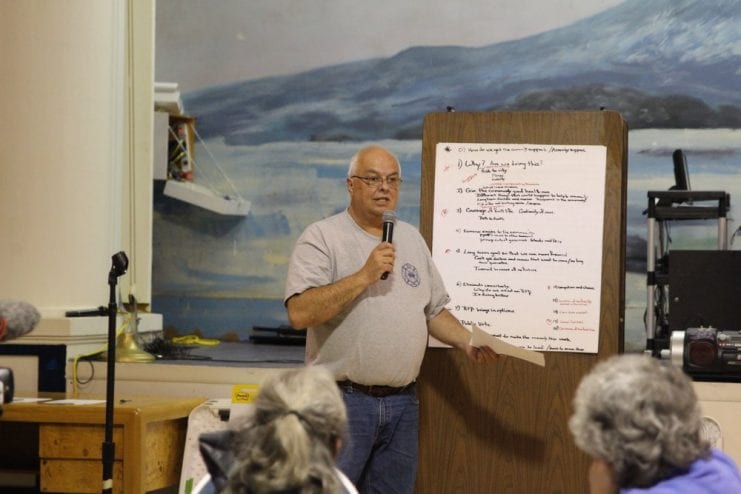 Part of the public process involved sharing the ideas from small-group discussion with the larger room. The ideas are being distilled by city staff into a larger report for the Sitka Assembly. Fire Chief Dave Miller talks through his group’s list. (Karla James/KCAW photo)

Fire Chief Dave Miller, who led one of the small group talks, said his group’s central question was whether the community could together on such a historically polarizing issue.

“How do we get community support to decide what we want to do overall? I mean, do we want to sell? Do this or that?,” he asked. Taking stock of the room, he added, “This is the greatest audience I’ve seen in Sitka dealing with this issue since it all started. There are people in this room that have been at no other meetings. None of them. And I think that’s great.”

“I think that solution was put into motion last night. I think the coming together of all these folks, the willingness to come out, the desire to give input and look for solutions — as opposed to give demands — really is going to go a long ways,” Bosak said.

The City will host a second town hall meeting Thursday, August 31 at 6 p.m. at Harrigan Centennial Hall with a similar agenda and format.

All public comments will be compiled and delivered as a report to the Assembly at their next meeting on Tuesday, September 12th. They’ve directed the city to draft a RPF (request for proposal), entertaining offers for sale, co-management, and more with Sitka Community,

The Sitka Community Hospital Board will also host a work session and special meeting on Monday, September 11th at 6 p.m. in Harrigan Centennial Hall. They’ll be taking public comment on stopping labor and delivery and scheduling surgery during the day.