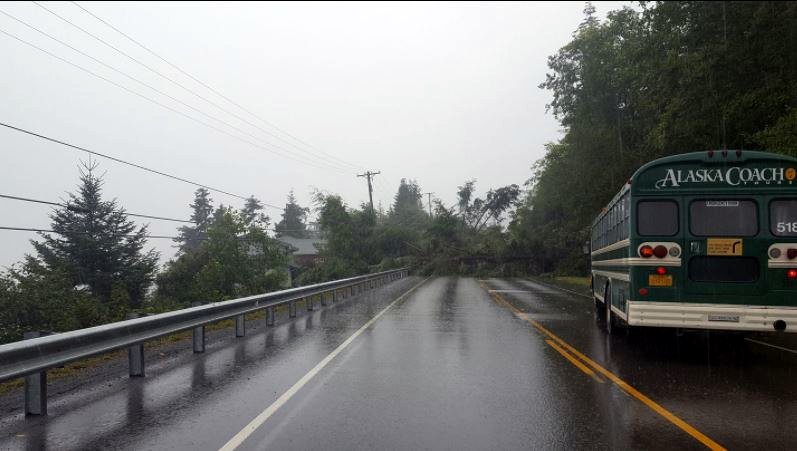 A tour bus with passengers from the Seven Seas Mariner encounters the slide, which originated 200 feet up the hillside. The passengers were later shuttled to their ship via boat. (Cassie Mendoza photo)

A landslide in Sitka early Monday afternoon (9-4-17) stranded people on either end of the road system for about eight hours, but otherwise there no reports of damage or injuries.

The slide happened at around noon on Labor Day, along Halibut Point Road (4300-block), Sitka’s only northbound highway connecting downtown to the deepwater cruise ship dock and the state ferry terminal.

Sitka Fire Chief Dave Miller was one of the first on scene.

“It’s pretty impressive. The hillside came down maybe 200-feet in elevation down to the road level. It’s maybe 100-150 feet wide. It was a pretty good piece of earth that came down.”

The Sitka Electric Department cut power along the highway while crews worked to clear debris, some of which was pushed against poles supporting the main electrical transmission lines, which had shorted out.

Emergency shelters were available at both the Sitka Sportsman’s Association indoor shooting range and at the state ferry terminal, however few took advantage of them. Ferry passengers instead lined up in their vehicles on the roadway to wait while the slide was cleared.

Passengers aboard the Seven Seas Mariner were shuttled to their ship aboard private tour vessels operated by Allen Marine.

The Marine Highway scheduled an additional sailing of the Fairweather on Tuesday to accommodate passengers unable to reach the ferry terminal.

Although inconvenient, the slide is small relative to the Kramer Avenue slide in August, 2015, which killed three people in Sitka. Fire chief Miller says there’s really no comparison.

“Five or six hours and we’re done cleaning it up, where Kramer Avenue was just days and days of cleanup.”

Nevertheless, slides of any size can be hazardous. A slightly smaller slide in 2005 — also along Halibut Point Road — demolished a vacant state maintenance building.

After a beautiful weekend of sunshine, Sitka received over 2 inches of rain between 4 a.m. and 10 a.m. Monday morning. More rain is expected later in the week.