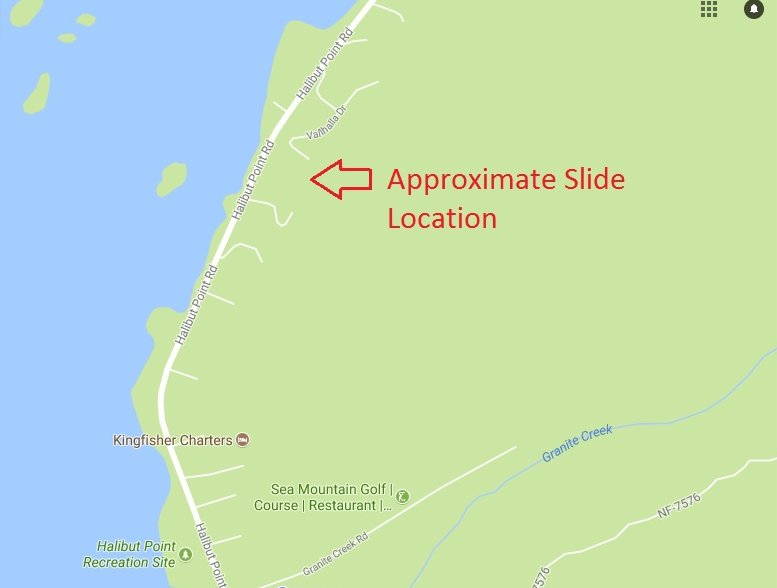 The Sitka Fire Department responded to landslide activity today, when a section of dirt came down in the 4300-block of Halibut Point Road.

The slide happened in the exact same location as Monday’s (04-04-17) landslide, which saw the closure of Halibut Point Road for the rest of the day.

Today’s landslide is significantly smaller, with no damage or injuries reported. Fire Chief Dave Miller estimates it was 12-15 feet wide at the bottom. “It was just heavy rain, moving that dirt that’s already loose up there and moving it off the face of the cliff in the back,” he said.

The Fire Department got the news around 2:45 p.m. and briefly closed both lanes of Halibut Point Road to remove debris. The Fire Department then opened one lane to allow some traffic through.  The road was reopened to through-traffic two hours later.

Miller intends to keep an eye on the area throughout the weekend. NOAA predicts widespread showers and light winds. Sitka received an inch and a half of rain in the past 24 hours.

Miller advises citizens to be cautious, since landslides can happen in a moment’s notice.

“My suggestion is if you’re going by there, don’t stop to look. Make it a quick trip to cross. And maybe even if you don’t need to go out that way, don’t go out that way. Just don’t take the chance,” he said.

Harbor Mountain Road also remains closed above Gate 2 to motorized traffic, due to a damaged culvert from heavy rain. The Forest Service has not yet scheduled a repair date.