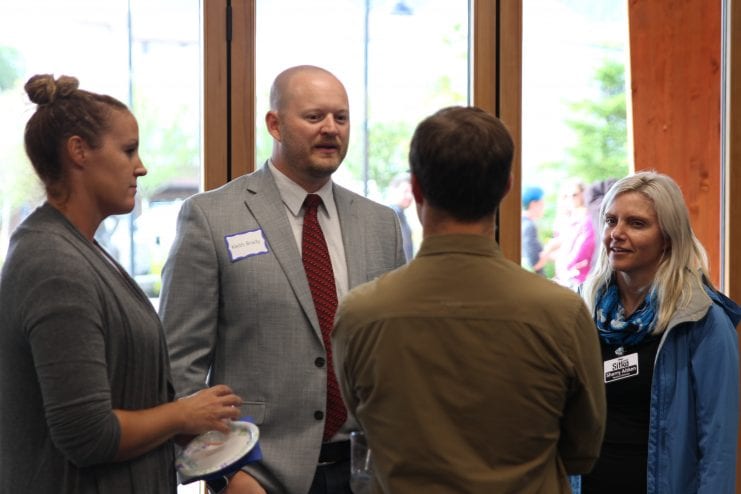 After a 9-month search, with national outreach through the Prothman Company, the Sitka Assembly has hired Keith Brady to serve as the municipal administrator. (Emily Kwong/KCAW photo)

Before his first day in office, Sitka’s new city administrator was on the ground.

Keith Brady arrived shortly before a landslide on Labor Day divided traffic on Halibut Point Road in two. He was working at the Hames Center when he got the call. “Got the call on my way home and I just went out there, just to see what was going on and kind of see how incident command worked,” Brady said.

Essentially, he saw his staff spring into action. He watched police officers and firefighters clear debris, direct traffic, and at the fire hall, he witnessed public information officers work together to relay information. He says what impressed him the most was the quick response of the community.

His goal, in these early weeks, is to listen to the city’s boots on the ground. “Even before I interviewed, I heard that the people I will work with are superstars. They really work well together. Smart people. Good group. And they really are,” Brady said.

Brady is new to the role of city administrator and to Sitka, though he spent part of his youth in Alaska. The 39-year-old married father of four was most recently in Green River, Utah, where he served on the city council for three years and as a County Commissioner for two years.

He left the position early to take Sitka’s city administrator job, advertised through the Prothman Company. That’s the firm hired by the Sitka Assembly in April.

There’s a lot happening at City Hall and a lot of information to digest. Brady’s desk is covered with binders, packets, and several volumes of administrator files. “I really knew coming into this there would be a big bell curve of learning, but like I said, it’s like eating an elephant. I have to take it one step at a time, one bite at a time. Really digest it all,” he said.

Brady’s family will arrive in November, so his wife can finish coaching a volleyball team back in Utah. If Brady leaves the position within a calendar year, the Prothman Company will recruit a replacement and charge expenses only.