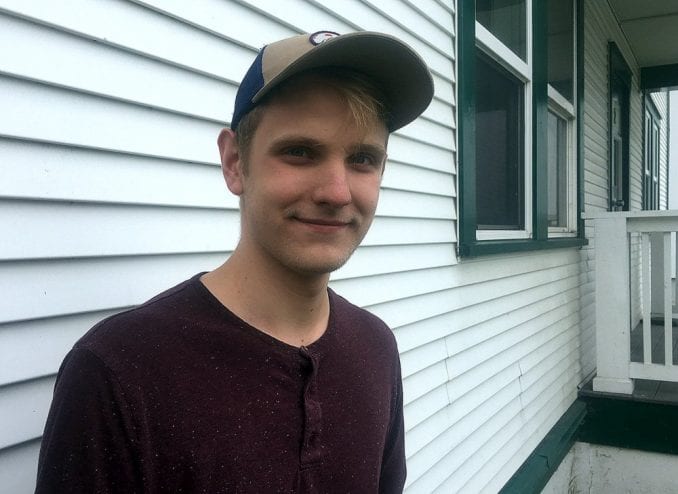 Though young, high school senior Elias Erickson certainly brings perspective to some of the issues facing the school board. Here are his thoughts on the Math curriculum: “While I know some are not fond of the district’s core plus curriculum, I am pleased the district has been so open to addressing those concerns and that they have options other than core plus available for students to take advantage of. While having core plus as an option for students has its merits, so does leaving options for students to take math through homeschooling and through UAS Southeast courses. This is great because it allows students to find what fits them best.” (KCAW photo/Robert Woolsey)

He’s the youngest candidate in this year’s municipal election, but not the least experienced.

High school senior Elias Erickson has served one full year on the Sitka School Board as the student representative, and now he’s trying for a full three-year term.

Note: KCAW will publish profiles of all nine candidates in this year’s municipal election — for both school board and assembly.

Elias Erickson held a seat on the Sitka School Board last year because he was vice-president of the Sitka High Student Body.

It’s not a ceremonial position: The student representative has a vote on all matters of school policy except funding. And Erickson was more engaged than some of his predecessors. He got the board to revise its suicide prevention policy, and he rallied his fellow students to walkout to protest the Alaska Senate’s proposed deep cuts to education spending.

Here’s Erickson in a KCAW news story from last May.

Erickson – The Senate went to Juneau this year to fix our state fiscal crisis, they went to solve the problem. And this is not the solution to the problem. This will only create more problems and hurt Alaska’s education. Can we all agree on that?
Students – Cheer.

The Senate eventually backed away from the cut. Despite this success, Erickson says he’s not really an activist on other political issues.

“As far as activism, no. I would probably say I stick pretty much to education, because that’s where I feel like I could be most effective. And that’s also the thing that I care about most.”

Erickson believes parents should play a large role in their children’s education. Like his four older brothers and sisters, he was homeschooled by his mother, Diana, until 6th grade.

Erickson says the change was good for him. He enjoyed meeting his friends in school, playing in the jazz band, and participating in the swim team. Nevertheless, he says there’s a role for parents.

“We need as much parent input as possible. One thing I would encourage is to simply show up at the meetings and provide your input. And while sometimes they’re not necessarily things that we can do to change, those are definitely things we can keep in mind when the board does its annual legislative fly-in to Juneau.”

Two issues at the heart of the education funding debate on capitol hill are quality and accountability. School critics challenge the value of standardized testing, and argue that there are more cost-effective alternatives to public education.

Erickson has a more holistic view.

“My idea of a really successful student is a student who keeps their life balanced. Who has a strong academic life. Who has a strong life in extracurriculars, in sports. A student who is balancing themself, and exposing themself to as many things as possible. So there’s definitely a long way to go in standardized tests, and we still quite haven’t found the sweet spot as a way to measure progress, but we’re on our way.”

Erickson understands the balance — the calculus — of his campaign for school board. Next May he’ll graduate, and his classmates will leave high school behind them. Erickson says he’ll remain in Sitka for at least a year, studying at UAS, and saving money for his college education, where he plans pursue public policy, music, or the Christian ministry.

His vision for service on the school board is quite clear. His epiphany came during last year’s Youth Leadership Summit in Anchorage, when participants were surveyed on a variety of topics — some light, like “Do you play sports?” and others quite serious.

“There were questions like: Have you ever been told you were worthless by your parents? The amount of people who stood up — it just broke my heart. It so laid into this belief that I have that kids in Alaska, students my age, they don’t understand the potential inside of them, and they don’t understand what they’re capable of. And discovering your potential is a real thing. It’s a moment people come to, and it’s something that I want to see in my peers, and in the students at Sitka High School, and in the students at Blatchley. I want them to discover the potential inside of them so they realize, Hey I’m not worthless. I can do something meaningful in life.”

For this 18-year old, meaningful means running for school board. And does this message resonate with voting-age students? Actually, Erickson is focused on an older demographic, who may look at his campaign skeptically. “Not necessarily kids,” he says, “but teachers. Having conversations, addressing their issues, and doing what I can to earn their trust.”